The British just system has taken over 1,000 years to evolve into the one we recognise today. Its foundations and principles have been retained by so many countries that 30% of the world’s population live under its rule[1], and for those who are not fortunate enough to be governed by such, I suspect, envy those who are.

Yes we have miscarriages of justice – and as a Barrister I don’t dismiss these lightly – but we have to accept, that no system, built by humans for humans, can ever be perfect. However, as a person of colour, I think I  would rather hedge my innocence being proven through the balance and checks of our legal system than one from, say, in Guangzhou, China or perhaps…Minneapolis, USA, but am I right to ‘feel’ this way?

Where is the evidence to support such a notion?

China is well versed in the criticisms levied against it by the world for inhumane treatment of particular ethnic groups in its society. In United Nations findings, 2018, the Committee on the Elimination of Racial Discrimination, Amnesty International’s Deputy East Asia Director Lisa Tassi said:

“The Committee’s findings highlight the systematic oppression of ethnic minorities in China, including the mass arbitrary detention of Chinese Uighurs and others in the Xinjiang Uighur Autonomous Region (XUAR)”

The Committee found that the Chinese government were mass detaining certain groups under the pretext of countering terrorism, with the estimated number of those being detained ranging from tens of thousands to the unimaginable number of a million. Because of the broad way in which terrorism has been defined in legislation, this has meant that an act of peaceful or religious expression could be defined as a threat to the state, having the effect of targeting particular ethnic and religious groups.

In the USA’s report of the same year (2018) to the UN Special Rapporteur on Contemporary Forms of Racism, Racial Discrimination, Xenophobia, and Related Intolerance, this report also made some troubling findings.

The US justice system and race

In 2016 (the last figures), Black Americans made up 27% of the prison population, double their share of the total population. The USA criminal justice system caters for the largest prison population in the world (2015, over 6.7 million people were incarcerated). The figures collated in this report provide a clear picture of the disparity between the races.

This report concluded that the impact of systemic racism was a broad reason for the above findings, however, that deprivation also played a part where the US’s legal system ran a two tier system – one for the rich and one for the poor, essentially, if you’re rich, you can buy your way to freedom. There is an over representation of individuals from poor areas in the criminal justice system who tend to come from ethnic groups.

In attempting to evidence its findings, the report compared and contrasted those arrested for drugs. Use rates of drugs in the States are largely comparable, and yet if you are African American, you are 3.7 times more likely to be arrested than a white person. The same disparities arise when you consider the US’s equivalent to stop and search.

The question of race and justice in France

Closer to home, in France, the justice system based on the principles of freedom and fairness is also under scrutiny.  French state policy rejects any references to a person being identified by his nationality, racial, ethnic, religious or linguistic difference. Anyone in contact with the State is faceless and cannot be judged on who they are or what they look like, purely for the deed they are being accused of committing.

This starts off well doesn’t it? However, the experience of ethnic groups is very different. They describe themselves as being ignored, suffering racism (both direct and indirect) at community and state level, but with little clear path to seeking redress, because as is often the case, it is very hard to prove the causative reason for an act, merely that the act has occurred.

The French government refuse to conduct research on the experience of those that may be linked to their race. For example, it doesn’t know how many of its people follow the muslim religion or identify as a member of an ethnic group.

“Legally, the constitutional principle of equality has been interpreted as prohibiting the government from collecting data or statistics on the racial, ethnic or religious backgrounds of its citizens, in any context. This means for example that the socioeconomic status of groups across any indicators based on racial, ethnic, religious or other grounds is unknown, and that the national census does not include any questions about race or ethnicity.”

So the French government, and its citizens, have no idea whether one group is suffering from discrimination, or to consider a more positive slant – if the state is getting it right for all its citizens. There are few anti discrimination laws, but of the ones that exist there are even problems identified within those. In particular they refer to “immigrants”, even when the person who is attempting to rely on the protective law is a second or third generation French national and member of society.

The situation in the UK

In 2017, David Lammy MP undertook an 18 month review of ethnic groups and their contact with the English criminal justice system. I’m sure you won’t be surprised at what he discovered: Just 3% of people in England & Wales are Black, and yet 12% of our prison population is Black. Going further, 25% of our prison population, and over 40% of our youth prison population, come from ethnic minority backgrounds. That compares to 14% of the overall population, and for those facing imprisonment and identified as Asian or Black, were associated with a 50-55% increase in the odds of imprisonment, compared to those self-reporting as White.

You may also be familiar with the figure that a black male is twice as likely to die during an arrest than a white male and that he is 47 times more likely to be stopped and searched.

Clearly, my ‘feeling’ that I would fair a better chance navigating my way through the criminal justice system in this country than any other is not based on the empirical evidence.

However, I take hope: in 2019 the EU undertook research into the experiences of racism suffered by black and other ethnic groups in the member states. It found that the level of racism experienced in Britain was ‘relatively low’ in comparison to the other member states and even in the US….so maybe my ‘feeling’, although not completely justified, should at least be hopeful?

How entrepreneurs can stay visible during the Brexit rollercoaster

How is contemporary Black activism reshaping itself? 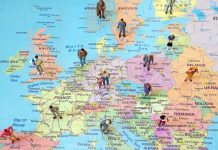