In the first of a series of five articles, Oxford Cannabinoid Technologies will discuss their expertise on the medicinal use of cannabis derivatives

The best-known of these phytocannabinoids are tetrahydrocannabinol (THC) and cannabidiol (CBD) and two well-known cannabinoid receptors in the brain are CB1 and CB2. The CB1 receptor binds with THC and is thereby responsible for THC’s psychotropic effects. Most if not all phytocannabinoids, however, act on more receptors than just these – the study of these compounds is, therefore, highly complex and their potential to treat a wide range of diseases is highly significant.

The potential of cannabinoids to alleviate the symptoms of cancer and even treat its underlying causes has been discussed since pre-clinical research papers in the early 1970s demonstrated that the growth of lung tumours in mice could be slowed by THC and other cannabinoids.(3) While the ability of cannabinoids to alleviate the symptoms of cancer is widely accepted, pre-clinical studies suggest that cannabinoids may be effective in the actual treatment of multiple cancer types (for instance glioblastoma multiforme((4)) and prostate cancer((5)). Some studies have also affirmed that cannabinoids have a protective effect against certain types of tumours. Others suggest that cannabinoids can inhibit proliferation, metastasis and migration of cancer cells and even induce their death.

Despite these potential anticancer effects of cannabis, it is also important to note that, depending on the drug concentration, studies have found that cannabinoids can both inhibit and stimulate cancer cell proliferation;(6) more research must, therefore, be undertaken on the effects of cannabinoids on different tumour cell types. 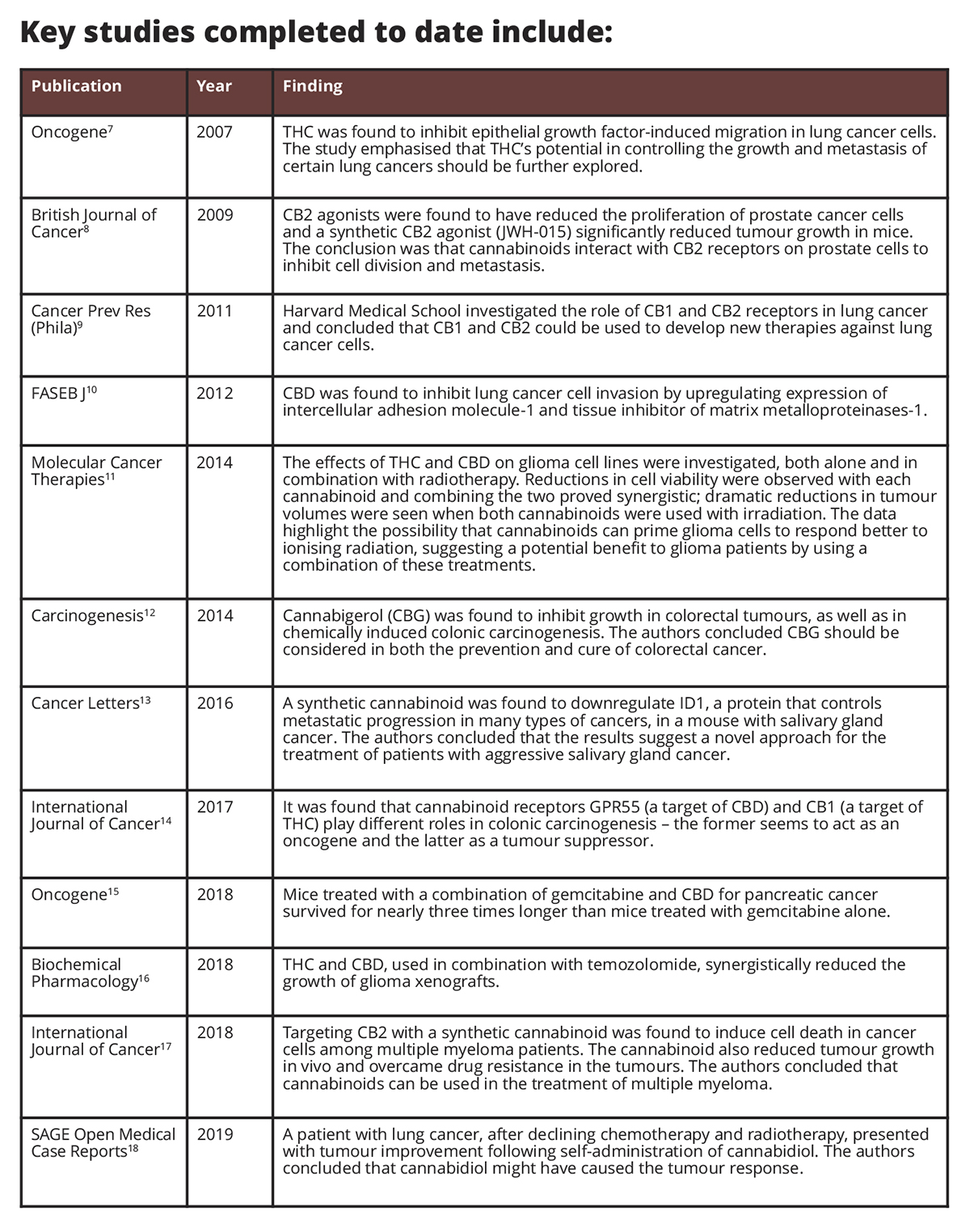 Beyond scientific studies, there have been several ‘real-world’ examples of cannabis having the potential to treat cancer:

Given the growing body of pre-clinical research and anecdotal evidence, the potential curative properties of cannabinoids warrant significant further study. Cancer remains a key focus area for Oxford Cannabinoid Technologies, with multiple programmes already underway aimed at discovering new treatments for a range of cancer types. We look forward to sharing the learnings from these studies in due course.