Chronic inflammatory lung diseases are increasing worldwide with no cure available. The available therapies reduce chronic inflammation and acute symptoms but have no effect on the pathologic tissue structure changes that occurs in the airways and the peripheral lung (tissue remodelling). The American Thoracic Society declared in 2016 that it is unlikely to find any cure for asthma unless the mechanisms leading to the structure changes of airways is understood. Similar conclusions can be made for other chronic inflammatory lung diseases such as COPD and lung fibrosis.

With the support of the European Union funded initiatives (IMI, IC PerMed) over the past two decades, several consortia were formed to better define chronic inflammatory lung diseases in order to find disease specific diagnostic markers, as well as new therapeutic targets. The different studies searched for disease specific profiles in the genome, the transcriptome, the epigenome, the proteome, the secretome and the metabolome. However, the success of such investigations is dependent on a clear diagnosis of the patient cohorts, which is one of the biggest challenge. Furthermore, it is often ignored that results of omics studies (except the genome) only reflect the situation of a patient at the time of the sample collection (figure 1). Therefore, one has to expect large variance for each parameter. 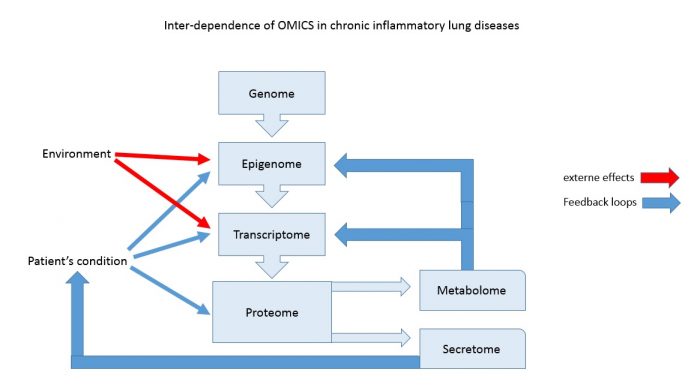 The genome describes the genetic information, which is the same in each cell of our bodies and is stable over the entire life span, except in cancer cells. DNA modifications such as alleles, or mutations, had been shown to cause lung diseases such as cystic fibrosis. However, Genome Wide Association Studies (GWAS) did not provide novel markers for asthma or COPD, while they confirmed a link to genetic defined lung function control genes and allergies. There are reports that indicate ethno-specific gene polymorphisms, which correlate with the susceptibility to asthma and COPD. Most of these studies have been performed in a relative small cohort and need to be confirmed in larger population.

The transcriptome is the indicator of gene activity and aims to find patterns that characterise specific conditions. Therefore, the transcriptome can be specific for organs of different cell types, and it varies in pathological conditions. Gene activity is regulated by transcription factors, by the confirmation of the DNA, as well as the confirmation of DNA structure proteins such as histones. In a classical transcriptomic analysis, only the expression of messenger RNA and regulatory micro RNAs are determined. There is no information if the gene activity is the results of increased transcription, degradation, inhibition or modified access to the DNA. Therefore, the information obtained from transcriptome studies is limited and needs further time consuming and meticulous studies for each of the genes, in order to understand the pathological mechanisms behind it. In regards to chronic inflammatory lung diseases, none of the studies described disease specific transcriptome profiles, which had not been known earlier.

The epigenome is defined by the National Human Genome Institute as a multitude of chemicals that can tell the genome what to do. Thus, the epigenome can affect the transcriptome and the proteome. How epigenetic mechanisms work is not well understood. Besides DNA methylation and histone modification, other mechanisms that control gene accessibility have been described. Most important to asthma and COPD, there is evidence that the epigenetic mechanism can be activated by allergens or cigarette smoke and is inheritable. Furthermore, under certain conditions, an epigenetic mechanism can be reversed. How this happens is not understood. Knowing the epigenome is essential to understand the transcriptome and may hold new targets for diagnoses and therapies.

The proteome summarises all proteins, which are expressed by an organ or cell type, and it was assumed that diseases correlate with specific protein profiles. However, in regards to chronic inflammatory lung diseases, only the increase of pro-inflammatory proteins and the suppression of anti-inflammatory proteins was confirmed and no new information was obtained. It should be kept in mind that the proteome reflects only the situation of the time point of sample collection and does not allow to draw conclusion regarding the progression of the disease.

The secretome describes the proteins, which are secreted by specific cell type or organ, and therefore can be found in body fluids such as sputum, bronchial lining fluid, or blood. So far, none of the conducted secretome studies reported any new protein profile that would clearly separate one disease from another. The metabolome is a relative new concept and analyses the changes of intracellular metabolic processes; Thus, metabolomics is a synonym of analytical chemistry with the advantage to analyse tens of thousands small molecules at the same time. Similar to the other omics, metabolomics studies in asthma and COPD confirmed the role of glutathione, fatty acids, as well as arginine and proline metabolism in the pathology. To define disease specific patterns in the metabolome in the patients will need extensive studies in the future.

Despite disease specific genome modifications, which have not been found for any of the chronic inflammatory lung diseases, all other omics suffer from the problem that they revealed the situation at a specific time point (sample collection). There is an increasing number of scientific reports showing that the results of omics vary between ethnic groups, genders, cell types, organs, time points of sample collection, the disease stages, and even with seasons. Therefore, future studies will have to take all these variables into account and standardise procedure will have to be deployed before the results of any omic analysis can be used as marker for disease diagnosis or the basis to develop therapeutic strategies.

For more information, visit the website or view the stakeholder page