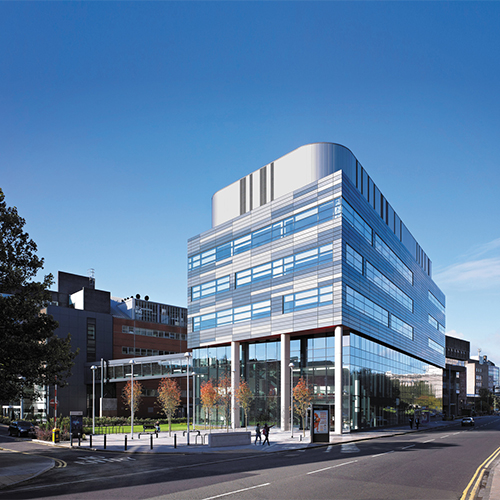 As we continue the development of our anti-infective and immunomodulatory drug discovery programmes at the University of Strathclyde, applying our skills and experience in heterocyclic chemistry in collaboration with specialist biology groups from around the world, it is interesting and also challenging to read in the scientific literature of work in other laboratories directed to the same ends. New papers describe not only what the international competition has achieved, which contributes to the challenge, but also tangential observations that can lead to new lines of enquiry for our own work.

Readers who have followed my recent contributions in this medium will be aware that in my teams we have a compound in clinical trials and many compounds at advanced preclinical stages for the treatment of infectious diseases caused by bacteria, fungi, and parasites coming from our DNA minor groove binders programme, compounds that we refer to as S-MGBs. These are heterocyclic compounds, the field of chemistry, which is the focus of our synthetic work. We also have a series of compounds with the potential to treat diseases of imbalance including asthma, rheumatoid arthritis, and lupus erythrematosus, to name three, which come from what we call ‘the worms project’, reflecting the biological starting point for the project. In writing this article, I’ve selected four publications from around the world that have attracted our attention at Strathclyde because of their relevance to our programmes. Each of them illustrates a different impact on our studies.

The first concerns new antifungal compounds [doi/10.1073/pnas.1608304113] discovered though research in England and the U.S. Most of the politics around antimicrobial resistance refers to bacteria, which most people recognise as the so-called superbugs. However, fungi can be just as life threatening to susceptible patients and around 1.5 million deaths are caused by fungi each year. Many millions more suffer from a long-term chronic debilitating disease with an associated world-wide financial burden of $13.9 billion by 2018. Unlike bacterial infections, for which there are many types of drug available, only four classes of antifungal agents are available to treat invasive fungal infections all of which have practical limitations, not least of which is the emergence of resistance to the limited number of available treatments. Not only did the research I’m highlighting produce a new candidate antifungal compound it also discovered a new biological mechanism for antifungal activity, an enzyme target known as dihydro-orotate dehydrogenase. Both of these features are very encouraging for development because high activity without resistance can be expected. In our S-MGB research we have also identified some highly active antifungal compounds that work by a novel mechanism. So there is competition between different teams and different compound classes which is a good thing.

Turning now to antibacterial drugs, one of the biggest challenges concerns the class known as Gram-negative bacteria. This large class of bacteria presents its problem because of its double cell wall and its ability to pump drug molecules out of the cell before they can do any damage. The biological pumps are embedded in the cell wall structure. Many groups around the world are tackling this problem sometimes with new compound classes but more successfully with strategies that try to deal with the double cell wall and the pumps. If the cell wall can be weakened or the pumps reduced in activity, for example, perhaps the new drug could get into the Gram-negative bacterial cell and kill it. One of our S-MGB projects is looking at these approaches with some encouraging results and we are further encouraged by a paper from Canada, my second example [doi: 10.1038/nmicrobiol.2017.28], that showed that an old class of minor groove binders, pentamidines, that has been used widely in anti-parasitic therapy can make resistant Gram-negative bacteria susceptible again to the drug colistin. Disruption of the cell wall is believed to be the mechanism of action and we think that some of our S-MGBs work partly in the same way.

But there’s an alternative approach to deal with the cell wall, namely to arrange for the bacterium actively to absorb the drug using its natural uptake mechanisms. One such mechanism uses compounds known as siderophores, which have evolved to bring iron, an essential element, into the bacterial cell. By attaching a small siderophore through specific chemical bonds to an established drug to which Gram-negative bacteria are resistant, a beta-lactam known as a Monobactam, a Chinese group has shown that extremely potent new compounds active against Gram-negative bacteria can be obtained [doi: 10.1021/acs.jmedchem.6b01261]. This beautiful piece of research reached proof of concept stage by showing that their most active compound could successfully treat mice infected with the Gram-negative bacterium, Klebsiella pneumoniae. We have some S-MGBs active against this organism but no in vivo data yet. We have not tried the siderophore approach yet; maybe we should.

Whilst new antimicrobial compounds are one world-wide need, new drugs to treat diseases of aging are also high profile. For example, researchers have been looking over decades for drugs to treat Alzheimer’s disease by targeting the protein modification mechanisms that have been found to occur in the brains of Alzheimer’s patients but without significant success. A big question then arises about where a new drug should intervene in the pathology of Alzheimer’s disease. Some very recent work from England and Germany has suggested that certain inflammatory pathways controlled by a protein known as Nrf2 might be relevant [doi:10.1371/journal.pgen.1006593]. This surprised us because we have found that one of our compounds from the ‘worms project’ with anti-arthritis activity engages exactly this pathway [doi.org/10.1016/j.jaut.2015.04.005]. Does this mean that a drug candidate designed to be an immunomodulatory might turn out to be important in a major disease of neurodegeneration? We’ll have to do the experiments to see.

These selections serve to highlight the truly international character of scientific research and also illustrate the penetration of heterocyclic chemistry. When I used to preside at graduations at the University of Strathclyde, I would encourage the new graduates to see what they could make possible for the world using their academic and practical training. Well there’s some exceptionally good academic research into new anti-infective agents out there answering exactly that challenge. The real question now is whether all of this international science can be translated into medicines available to the public for health care world-wide. Current commercial development models don’t work because good antibiotic stewardship, which minimises the rate at which resistance arises to new drugs, runs counter to selling large quantities and making lots of money for the pharma company and its shareholders. Things will have to change somehow.