EnvisionTEC was founded in 2002 by engineer entrepreneur Al Siblani.

Siblani immigrated to the United States from Lebanon to attend college. After earning a bachelor’s degree in engineering at Lawrence Technological University in Metro Detroit and a master’s degree in electrical and computer engineering from Wayne State University, also in Detroit, Siblani entered a 3D printing market still in its infancy. He was 26.

The first rudimentary methods of three dimensional printing were developed in the early 1980s, and Siblani began working in 1993 for an early 3D printing company, Helisys, that used Laminated Object Manufacturing (LOM) technology to create prototypes for automakers and other commercial customers. Shortly thereafter, he founded Sibco Inc., which provided 3D printing services and materials, often to the Detroit Three automakers.

In 1996, after mastering the 3D printing technologies and materials at that time, Siblani decided to make his own printing machines using a novel idea to cure liquid resins into objects.

His first patent submission, which laid the foundation for EnvisionTEC, was filed in 1999. Sasha Shkolnik, who had worked with Siblani at Helisys, helped to develop the technology with Siblani and has been the Chief Technology Officer of the company since its founding.

EnvisionTEC’s first 3D printer was a hit in the jewellery market – largely because of its ability to deliver incredible precision and surface finish, quickly – and the technology spun out to other sectors from there. Customers who manufacture hearing aids, dental prosthetics and other small and smooth parts followed.

Today, as the 3D printing market continues to mature, many different processes are used around the world to 3D print objects from digital design files.

EnvisionTEC now relies on six unique and different processes to 3D print objects from digital design files, and its technology makes parts big and small in a wide range of industry-leading materials, including a growing library of materials certified for medical use. 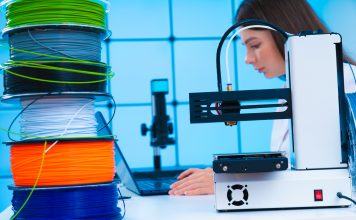