The HealthyMinorCereals project studies five species of currently less cultivated cereals with the aim to ensure human nutrition through diversity.

Cereal production across the EU is currently based on three main crops –wheat, barley and maize – accounting for more than 85 % of the cereals produced and grown on about 78 % of the cereal cultivation area. Amongst small grains, wheat and barley are classified as ‘major cereals’ whilst the other cereals (such as rye and oat) grown on much smaller area are classified as ‘minor cereals’.

The HealthyMinorCereals project, funded by the EU FP7, studies five species of currently less cultivated cereals – rye, oats, spelt, einkorn and emmer. Not so long ago, however, rye and oats were widely grown in parts of Europe. Rye traditionally played an important role especially in central and eastern Europe for bread making, but in the past decades was largely replaced by higher-yielding common wheat. Oats, once a major cereal in northern Europe, has declined to a minor cereal during the last sixty years. To get a closer picture, in 1961 rye was cultivated on 14 % and oats on 11 % of the area cultivated with cereals in Europe, whilst in 2014 the cultivation of rye was reduced to only 4 % and of oats to 5 % of the area cultivated with cereals. Einkorn, emmer and spelt are among the earliest cultivated wheat species. Nowadays, their cultivation is restricted mainly to marginal sub-montane or montane areas of eastern and southern Europe and Turkey, with spelt grown also in Germany and Switzerland. There is no data available on the cultivation area or production of emmer, einkorn or spelt in the EU for the last five years. This illustrates that there is hardly any economic interest in these ancient crops. However, this may soon change.

In recent years, minor cereals gradually gain more interest amongst both farmers and consumers. Despite their lower yields (being less bred to achieve high yields), farmers have interest in growing traditional cereal species as these are well suited to less intensive cultivation, including organic and conservation farming. They grow well in marginal conditions, are less dependent on external inputs (mineral fertilizers, pesticides) and thus their production has fewer negative impacts on the environment. Also consumers’ demands for healthy nutrition have been recently growing.

There is growing evidence that healthy nutrition is best achieved by eating diverse food as each plant contains a unique set of nutritional and bioactive compounds that cannot be, in the same way, replaced by artificial addition of micronutrients known as industrial food fortification (as it does not always result in the added nutrients being as bioavailable as they would be in the original, whole food). Not less important is also the fact that supporting biodiversity in agriculture is vital for maintaining ecosystem sustainability and robustness, and that agro-systems with high biodiversity are better adapted to more variable environmental conditions.

“It is absolutely crucial that we ensure human nutrition by growing biodiversity and offering our consumers naturally nutritious food, and not to industrially fortify nutritionally-poor highly processed products”.

We tested more than 600 genotypes of rye, oats, spelt and their wild relatives and found much higher levels of total antioxidants in these minor cereal species in comparison to the tested currently cultivated varieties of common wheat. 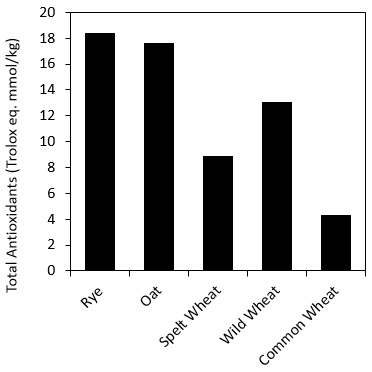 For more detailed information on the project follow our web-page: