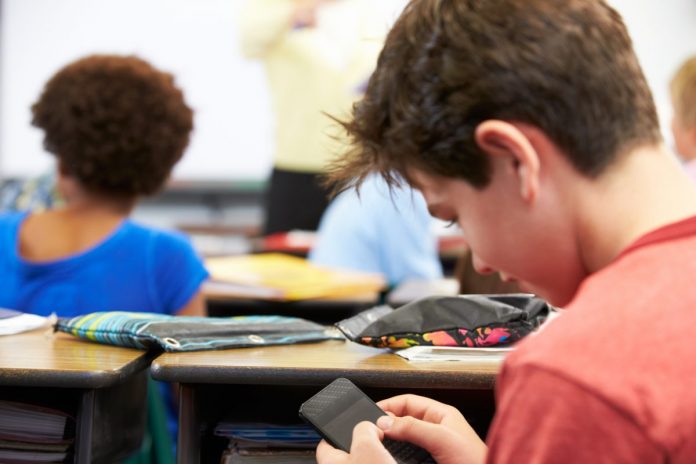 An investigation into training teachers to tackle poor pupil behaviour will also cover issues relating to smartphones in lessons.

Schools Minister Nick Gibb has announced an investigation into behaviour will be expanded to cover issues including the use of mobile phones and devices in schools.

Tom Bennett, former teacher and government expert, was asked in June to lead a review into how initial training prepares teachers to tackle low-level disruption in class. This review will now expand to look at the challenges that face schools in the modern age.

The government recognised technology can expand the learning experience when used appropriately. However, the growth of personal devices is hindering teaching.

A report from the London School of Economics found banning mobile phones from the classroom could significantly benefit learning. The study, undertaken in May, could add as much as an additional week’s worth of schooling over an academic year.

Gibb said: “Since 2010 we have given teachers more power to ensure good behaviour in the classroom.

“But we need to make sure the advice we give to schools and the approaches being used across the country are fit for the 21st century when even primary school pupils may be bringing in phones or tablets.

“That is why we have taken the decision to expand Tom Bennett’s review to look at how teachers can tackle bad behaviour.

“Whether it is the use of mobile phones in schools or the attitudes of parents to their child’s behaviour in class, we will now probe deeper into behaviour more generally to ensure that no child has to put up with having their education disrupted by misbehaviour.”

Bennett said: “Technology is transforming society and even classrooms – but all too often we hear of lessons being disrupted by the temptation of the smartphone.

“Learning is hard work and children are all too aware of this. So when they have a smartphone in their pocket that offers instant entertainment and reward, they can be easily distracted from their work.

“This is a 21st-century problem and the majority of schools are dealing with it effectively. But I will now probe deeper into this issue, and behaviour challenges more broadly, to uncover the real extent of the problem and see what we can do to ensure all children focus on their learning.”

A survey carried out in 2013 revealed that the vast majority of schools have a mobile phone policy in place, with one third banning phones outright and a further fifth limiting their use in lessons.

A number of behaviour experts will assist Bennett in the investigation, which will focus on what effective behaviour management is currently implemented in schools.