“Electricity prices are at unsustainable levels. This is hurting our people and industry,” stated Kadri Simson, European Commissioner for Energy.

Throughout 2022, the Commission has been tackling the issue of energy prices rises, and Member States have deployed several measures at a national level which the Commission provided through the Energy Prices Toolbox adopted in October 2021 and expanded in Spring 2022 with the Communication on short-term market interventions and long-term improvements to the electricity market design and also the REPowerEU Plan.

Furthermore, the Commission aims to make buildings more energy efficient, which will significantly contribute to the EU achieving its energy and Net Zero goals.

Following Minister Simson’s above statement in September 2022, the Commission has since proposed an emergency intervention in Europe’s energy markets to tackle the dramatic price rises. Being confronted with the effects of a severe mismatch between energy demand and supply, due largely to the continued weaponisation by Russia of its energy resources, the EU took this further action to ease the pressure put on European households and businesses over the past year.

These exceptional electricity demand reduction measures follow on from previously agreed measures on filling gas storage and reducing gas demand to prepare for winter 2022. The measures aim to help reduce the cost of electricity for consumers and measures to redistribute the energy sector’s surplus revenues to final customers.

The measures for tackling high prices include three proposals:

• Reducing demand – this can impact electricity prices and achieve an overall calming effect on the market. Member States are now required to identify the 10%
of hours with the highest expected price and reduce demand during those peak hours. The Commission also proposes that Member States aim to reduce overall electricity demand by at least 10% until 31st March 2023. They can choose the appropriate measures to achieve this demand reduction, which may include financial compensation.

• Proposal of a temporary revenue cap on ‘inframarginal’ electricity producers – this cap is proposed at €180 EUR/MWh, and is aimed at technologies with lower costs, such as renewables, nuclear and lignite, which are providing electricity to the grid at a cost below the price level set by the more expensive ‘marginal’ producers.

• Proposal of a temporary solidarity contribution on excess profits generated from activities in the oil, gas, coal and refinery sectors which are not covered by the inframarginal revenue cap. This time-limited contribution would maintain investment incentives for the green transition. It would be collected by Member States on 2022 profits which are above a 20% increase on the average profits of the previous three years.

The revenues would be collected by Member States and redirected to energy consumers, particularly vulnerable households, hard-hit companies, and energy-intensive industries.

Commissioner Simson said: “We are making an emergency intervention in the design of our power market, capping revenues for lower-cost electricity producers, and allowing exceptional measures on the regulation of prices for businesses and households. This will enable Member States to raise and redirect revenues to those in need in this difficult time, without undermining the long-term functioning of the market.”

The Commission are also prioritising helping those most in need this winter and beyond. In December 2022 President Ursula von der Leyen made three announcements to help Ukrainians, including:

• A new EU delivery of urgently needed power generators – around 800.
• The setting up of a rescEU health and energy hub in Poland opened to any third country donors – done in cooperation with the Commission’s G7 partners to greatly increase supplies of emergency aid to Ukraine.
• The donations of energy-saving lightbulbs – around 30 million.

During the December 2022 Extraordinary Energy Council, Minster Simson summed up the Commission’s work in tackling the energy price rises and the goals for 2023 and beyond: “We have worked intensively this year to respond to an unforeseen, complex and difficult crisis.

I am very grateful to all the Member States, as well as the Commission services and the Energy Community for the support they have already provided to Ukraine, but clearly, if shelling targeting civil energy infrastructure continues, we must strengthen our response.” 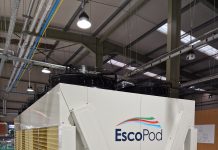