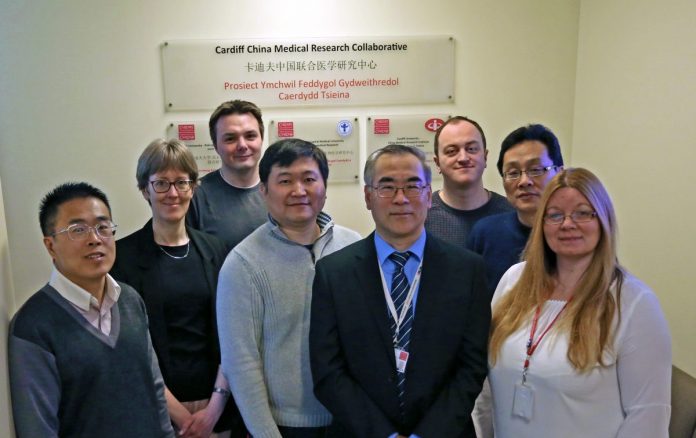 Cancer presents a serious issue worldwide for healthcare systems and results in substantial morbidity and mortality for afflicted patients. In Wales alone there were 8,933 reported cancer deaths in 2014, an increase of 7% compared to cases recorded in 20051. Dissemination of cancer cells away from the primary site to secondary locations, through metastatic spread, is tightly linked to patient outcome and treatment options. Whilst substantial progress has been made in the field of cancer research, specific anti-metastatic treatments are limited in comparison. The prevention of such metastatic spread would significantly improve cancer management and patient survival.

The metastatic cascade/mechanisms of spread

The metastatic dissemination of cancer cells from the primary tumour occurs through a sequential system of events, termed the metastatic cascade. Following carcinoma development, cancer cells can develop an invasive phenotype, invade through the basement membrane and expand into surrounding tissues. Here they will frequently secrete angiogenic or lymphangiogenic factors, develop their own blood or lymphatic vessels and subsequently invade (intravasation) and use these vessels to spread around the body to a secondary site. Here they will arrest, invade out of the circulatory system (extravasation) and develop micro- or macrometastasis2, 3.

Dysregulation of key cellular events enables cancer cells to proceed through this cascade unchecked. For example, expansion of primary cancer arises through the acquisition or enhancement of pro-metastatic/tumorigenic genes or the loss of metastasis/tumour suppressor genes. Subsequently, the loss of cell-cell contact molecules, such as E-cadherin and tight junction proteins, enhanced protease activity or expression, and enhanced cellular motility occur, resulting in the cells taking on a more mesenchymal rather than epithelial state (a process known as epithelial to mesenchymal transition or EMT), enabling cancer cells to invade. Secretion of pro-angiogenic factors, such as vascular endothelial growth factor (VEGF) enables cancer cells to develop their own vasculature which not only provides the rapidly growing tumour with essential resources but also provides close access to the vascular system.

Here, factors involved in interaction, migration and invasion through endothelial cells are key. Moreover, tumour cells must also develop mechanisms to avoid immune detection/attack and survive in the circulatory system until they reach their secondary locations around the body. Finally, invasion from the vasculature into the secondary tissues occurs and the metastatic foci can either remain dormant for many years as a micrometastasis or undergo rapid expansion to form a secondary macrometastasis 2, 3.

Importance of the microenvironment

Contributing to the complexity of this mechanism of cancer invasion and metastasis, the interaction between cancer cells and their surrounding environment also play key roles in the progression of cells through the cascade. Growth factors, angiogenic factors and inflammatory cytokines can all be released by surrounding immune cells, fibroblasts and fat cells or can be obtained through the degradation of extra-cellular matrices. These factors in turn function to drive processes such as angiogenesis, immune invasion and EMT and in doing so enhance the metastatic potential of the cancer cells2, 3.

Over the last 25 years improvements have been made in both early diagnosis and treatment regimens with combinations of surgery, radiotherapy and chemotherapy, leading to improved survival after treatment of many primary cancers. However, there are only limited options available for the treatment of most types of metastatic cancer, which is the commonest reason for cancer related mortality. Novel anti-metastatic treatments are vital in improving overall survival rates for cancer patients worldwide. Ideally, future therapies should be able to prevent the ability of a cell to break away from the primary tumour, thus removing the opportunity for the development of metastases. However, given the complexities of the metastatic cascade and the intricate cross-talk between cells and their microenvironment, such therapies would probably need to target multiple aspects or signalling pathways to achieve this.

In addition, a major consideration is the significant and serious toxicity associated with many current treatments. Therefore research into novel therapies with lower toxicities may also be warranted. There is growing interest in the scientific community as to the potential efficacy of low toxicity, well tolerated compounds, such as those found in many phytochemicals. Such potential has recently been highlighted in an incentive bringing scientists together from around the world to explore such products across all the defined cancer hallmark traits, in addition to cancer invasion, for their efficacy in a holistic sense4. Such therapies, or combinations of novel and conventional therapies may hold the key to the development of antimetastatic therapies and aid in the management of this disease.