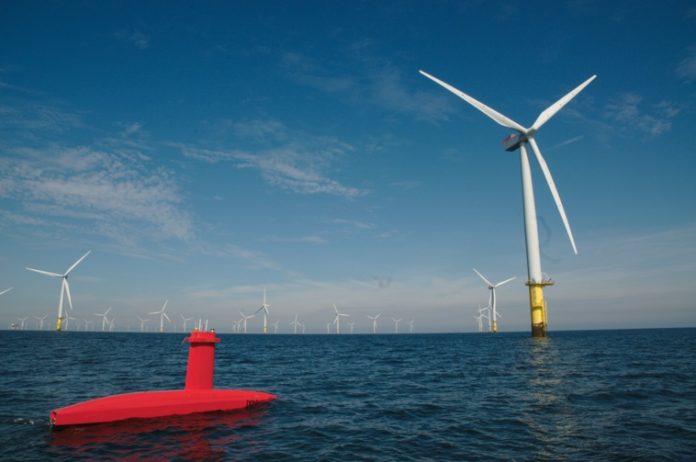 Experts from Global Aqua Survey & Sulmara Subsea chart a paradigm shift towards the use of uncrewed survey vehicles (USVs) for offshore wind farm surveys, beginning with comment on innovation & autonomy

Seabed surveys have traditionally been completed by crewed vessels with acoustic survey sensors mounted on their hulls. Technical innovations have increased the coverage and density of soundings achievable for a given survey duration; a major innovation, enabling such advances was the introduction of multi-beam echo sounder (MBES) surveys.

Further innovations have also made it possible to collect high-resolution survey data in deeper ocean areas, by combining subsea robotics with MBES, side-scan sonar (SSS) and underwater imaging/video surveys. This involves the use of remotely operated vehicles (ROVs) which can be lowered on a tether from a host surface vessel, and swim close to the seabed, reducing the distance between survey sensors and the seabed areas to be surveyed.

The next progression beyond the use of ROVs as a survey platform has been the introduction of autonomous underwater vehicles (AUVs). Similar to ROVs, AUVs are generally launched from surface vessels and descend through the water column, to collect survey datasets close to the seabed. The major difference being that AUVs are untethered, and once programmed by operators, before launch, are capable of completing extensive survey missions unaided by humans.

A similar shift towards increasing levels of autonomy has also been witnessed in the range of surface survey platforms available. Accordingly, there has been a dramatic increase in the development and use of uncrewed surface vehicles (USVs). From what started as small craft, equipped with a limited range of survey sensors, only capable of being deployed in calm, inshore waterways, a diversified global offering of uncrewed vessels has sprung up, and continuous progressions are being made in the scale and endurance of these vehicles and their inherent levels of autonomy. Innovations in this field offer a range of benefits to operators of subsea assets and infrastructure, reliant on hydrographic survey services. Of these, operators in the rapidly expanding offshore wind farm industry are quickly recognising the benefits associated with remote and automated survey services.

Harnessing innovation to realise the potential of autonomy

Sulmara Subsea is an international offshore subsea survey contractor, founded in 2019 and headquartered in the UK, but with operating bases strategically located in the U.S., Canada, Norway, Singapore and Taiwan. Sulmara provides all disciplines of survey services required to support the oil and gas, and renewables industries; furthermore, central to such support is Sulmara’s focus on the adoption of new technology to provide innovative on-site, remote and autonomous services.

Through partnering with technology providers and drawing on an expanding in-house knowledge base, Sulmara has introduced and are progressing the use of uncrewed and automated survey methods, resulting in significant cost savings to clients and reductions in environmental impacts. Sulmara has demonstrated how surveys previously requiring ROV support vessels (ROVSVs) can be completed by USVs. One campaign in 2020, in the Gulf of Mexico, demonstrated a survey duration cut from 200 to 45 days, through exchanging the ROV survey platform with a USV. This also resulted in 8,675 tonnes CO2 emissions reduction, linked to the associated fuel use. Sulmara has established itself as a preferred service provider within the offshore wind farm (OWF) sector through the provision of bespoke, client- driven, uncrewed survey solutions. The company is familiar with the entire life cycle of OWF projects, and is actively progressing service offerings targeting the provision of uncrewed/remote survey services throughout the various OWF project phases.

Sulmara Subsea: Current use of USVs

There are a wide range of USVs available for the completion of hydrographic surveys. Those selected by Sulmara for use in OWF survey campaigns have been specially designed and equipped to complete seabed surveys in challenging offshore environments. As a minimum, these vehicles are equipped with high accuracy GPS and inertial positioning systems and attitude sensors, and high resolution MBES, with specific vehicles having options for additional sensors such as sub-bottom profilers (SBP).

To complete survey tasks in the Greater Changhua OWF for Ørsted, Sulmara is using XOCEAN’s XO-450 USV. This USV will complete multiple small scopes during the installation phase of the wind farm, involving monitoring of seabed conditions, sand waves, asset integrity of monopiles, cable burial/stability, and as-left surveys. In-field water depths range from 30 to 46 m, the XO-450 will be deployed from an in-field support vessel when required, and operations will be controlled from a Remote Operations Centre (ROC) in Ireland. The XO-450 is capable of working in sea states up to 2 m significant wave height, and typically completes surveys at 3 knots, collecting MBES and SBP data, and boasts 18 days endurance, with capabilities to complete over-the-horizon (OTH) operations.

The utilisation of this uncrewed system, with launch and recovery, refuelling, maintenance and data upload, not requiring specialist survey personnel on-site, and command and control of both vehicles operation and data acquisition is completed at a ROC, therefore, eliminating the requirement for a survey team to be present in the country to complete these operations.

This marks a radical departure from the requirements of standard survey support operations, which usually involves a large team of specialists working in shifts offshore, with regular crew change requirements. In addition to enabling surveys to be completed more efficiently, the number of staff required to man these operations is dramatically reduced. Reduced manning is significant not just from a cost perspective, but also in helping to mitigate the effects of COVID-19 travel restrictions and reducing HSE concerns associated with having personnel on-site.

Sulmara has also undertaken multiple survey campaigns using an alternative USV, the DriX, produced by iXblue. This vehicles can also be deployed from a vessel infield using a DriX Deployment System (DDS). The DriX can work in sea states with 2.5 m significant wave height and achieves stability through a weighted gondola sitting below the vehicles keel (with a draught of 2 m). The USV payload is situated within the gondola, in a manner that provides acoustic shielding, allowing MBES survey data to be acquired at 7 knots, with an endurance of 7 days. Such high-speed survey capabilities have enabled Sulmara to cut overall survey times for route and area surveys. Sulmara has completed recent trials in France, testing the DriX without line-of-sight (LOS) and in OTH mode. Sulmara will operate the DriX in OTH mode, with operations controlled from Sulmara’s ROC in Glasgow and Singapore, in the future.

The Drix is regarded as a suitable survey platform for completion of survey scopes associated with the various phases of OWF installation and operation, including at the initial site investigation phase, acquiring data for seabed/habitat classification, environment/heritage surveys, shallow geology, route surveys, pre-lay surveys, site surveys and UXO surveys.

Sulmara Subsea: Future use of USVs

Aside from standard USV operations, in which data is collected by hull-mounted MBES and SBP sensors, Sulmara is currently progressing options for acquiring data from USV’s using towed sensors and subsea robotic systems. This allows payload sensors to be positioned closer to the seabed and is a core requirement for the completion of high-resolution surveys in deeper waters and for the completion of subsea asset inspection campaigns, in which a general visual inspection (GVI) of assets such as pipelines, cables, monopiles and jackets are required, necessitating collection of subsea image/video data.

In line with this, Sulmara is currently leading a European Space Agency (ESA) funded project to evaluate the feasibility of a commercial survey service, based on the combined use of USV and remotely operated towed vehicle (ROTV) survey platforms (or alternatively a USV paired with a small Hybrid AUV (HAUV) system, such as the A.IKANBILIS SAMBAL OS HAUV that is manufactured by Sulmara’s partner company, BeeX based in Singapore). This work focuses on the development of the core components required to operate uncrewed survey solution OTH, controlled from a ROC.

This involves the use of uncrewed survey assets capable of being retasked infield and transiting between work sites, with infield refuelling, maintenance, data processing and data transfer via satellite communication links. As such, the cloud forms a crucial part of this service, with automated data processing tasks being undertaken both onboard the USV and in the cloud. Once data has been uploaded to the cloud, this will be instantly accessible to the onshore survey team, with access also provided to a remote client representative, allowing real-time QC of data collection to be completed remotely.

Finally, a new generation of data deliverables can be made available to clients, and accessed via a bespoke web-based user interface. Sulmara is working with the company Xodus, who host a suitable cloud-based GIS system, which can be used to host such digital survey deliverables.

Sulmara has incorporated Sulmara Renewables Ltd., in Taipei and are committed to developing and executing innovation in survey for the benefit of the Taiwanese OWF industry. Central to Sulmara’s strategy is working together with the existing local supply chain to ensure smooth adoption of innovative on-site, remote, and autonomous services to clients. Accordingly, Sulmara has established a technical collaboration agreement with the local offshore survey company, Global Aqua Survey (GAS). GAS will assist in supporting Sulmara’s USV project at Greater Changhua OWF for Ørsted, providing engineers for system maintenance and onshore data processing of acquired MBES and SBP data.

USV surveys using hull mounted sensors are becoming widely recognised by OWF operators as a suitable replacement option for conventional crewed survey support services. The transition and adoption of such services are accelerating as a wider range of USVs become capable of OTH operations, while in the immediate term, it is the autonomy that plays a part in keeping projects on track amidst the various COVID-19 related restrictions that otherwise cause logistical and commercial headaches associated with project team movements.

There are limitations imposed on hull-mounted USV surveys though, in particular, the inability to position survey sensors close to the seabed or subsea assets. Successful deployment of the service Sulmara is currently progressing as part of the ESA funded development project, which could act as a game-changer for the offshore survey industry. Furthermore, given the pace of developments in this field, the question now appears to be when, not if, traditional crewed survey operations will become obsolete. And will these new generations of survey services soon become a requirement, not just an option for OWF operators?