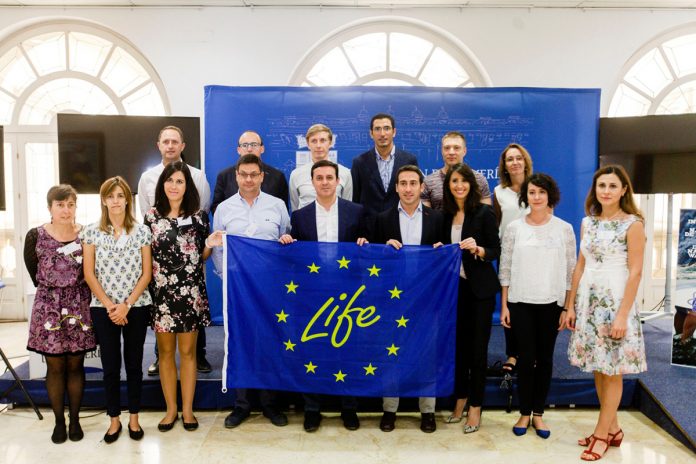 Anna Goi, Senior Research Scientist at the Tallinn University of Technology turns our thoughts towards state-of-the-art technology for natural radioactivity removal in groundwater

The natural radioactivity in groundwater was found in a number of European countries like Estonia, Spain, Germany, Italy, Sweden and Finland as well as in U.S. and in some African countries. Naturally occurring radionuclides, release into the groundwater during the rocks dissolution or from the soil leaching. These are mainly compounds originating from radioactive decay, or the release or transfer of excess energy, of uranium-238 and thorium-232, i.e. radium-226, radium-228, polonium-210, lead-210 and radon.

The obvious benefit of deep groundwater aquifers using is that the water is highly protected against anthropogenic pollution while the doses associated with exposures to groundwater natural background radioactivity are usually low and often delivered over a period of time resulting in stochastic radiation-induced health effects. Therefore, the radiation is usually overlooked as a potential hazard at public waterworks and the private wells.

Radioactivity that is tasteless, invisible and odourless accumulates in the tanks and piping systems resulting in radon generation through the radionuclides decay in bearing materials. Radon is a known human carcinogen (classified by the International Agency for Research on Cancer as Group 1)1 with genotoxic action2. Naturally occurring radon accumulates in poorly ventilated buildings and enters through an opening in the walls of the building, resulting in health effects, the most common of which is lung cancer.3

Besides radiological parameters, the concentration of other natural constituents in the groundwater as ammonium and heavy metals often exceed the parametric values set out in the Council Directive 98/83/EC on the quality of water intended for human consumption. To get water of potable quality, as well as to make it palatable and aesthetically attractive for human consumption, the introduction of the effective, safe, reliable and cost-effective drinking water treatment technologies is required.

Conventional water purification technologies based on the processes, such as ion-exchange, microfiltration, coagulation-flocculation, manganese dioxide oxidation-sand filtration, lime softening, co-precipitation with barium sulphate and electrodialysis have been employed. As the physical-chemical composition of the water is unique in the regions depending on the underlying geology, there is no universal water treatment technology. Thus, the waterworks should apply a targeted selection and adoption of the technology to the water composition that substantially influences the activity concentration of the radionuclides in water. This should be carried out along with assessing microbiological and chemical risks as a part of developing water systems safety.

According to the Council Directive 98/83/EC, the total indicative dose of radioactivity in water should not exceed the value of 0.10 mSv/year. This value represents a very low level of health risk and is typically at least a factor of 20 lower than doses that members of the public receive from all sources of radiation.2 Comprehensive and complex combined technologies for water purification allow easily to achieve this value and as a result to satisfy the demands for safe water.

However, despite the best efforts in the technology development process, the radioactive wastes are ultimately produced. This happens even if the technology aims at only co-occurring contaminants removal, such as iron and manganese since the radionuclides are known to be absorbed on the particulates formed due to the oxidation of these compounds. As a result, the treatment process of the water containing natural radioactivity influences considerably the working environment at the waterworks. Staff can be exposed to radiation through handling the residual streams generated by the treatment process and the spent material replacement and transportation. Thus, the technologies should be assessed not only taking into account their efficiency in the drinking water quality control and the cost of installing and operating, but also in the safe design of the process and the safe disposal of residuals process.

Moreover, there are several EU regulations implemented that greatly support the environmentally, economically and socially sustainable drinking water treatment technology development. Among these regulations are the Council Directive 2013/51/Euratom which lays down requirements for the protection of the health of the general public with regard to radioactive substances in water intended for human consumption, the Council Directive 2013/59/Euratom creating basic safety standards for protection against the dangers arising from exposure to ionising radiation and the Council Directive 2011/70/Euratom establishing a community framework for the responsible and safe management of spent fuel and radioactive waste.

The ALCHEMIA project (LIFE16 ENV/ES/000437) supported by the contribution of the LIFE financial instrument of the European Union (EU) aims to demonstrate the technical and economic feasibility of the use of sustainable systems based on the manganese dioxide oxidation and filtration for the effective removal of natural radioactivity in water. The consortium of the project consists of three partners from Spain – the CARTIF Technology Centre as coordinator, the Solar Energy Research Centre (CIESOL) and the Diputación de Almeria (DIPALME) and three from Estonia – Tallinn University of Technology, University of Tartu and AS Viimsi Vesi.

The implementation of the ALCHEMIA solutions in the particular drinking water treatment plants in Almeria (Spain) and Viimsi (Estonia) will serve as the knowledge-sharing platform for other municipalities and countries. A cost-benefit analysis will be carried out within the project to compare technologies based on the processes of manganese dioxide oxidation-filtration and the reverse osmosis in terms of operation, maintenance, waste management costs, safety, local conditions and legislative requirements. A database containing relevant information on drinking water treatment plants along EU treating water with natural radioactivity is developed.

During the project’s execution, particular stakeholders from target sectors such as water suppliers, manufacturers, policymakers are engaged to promote the results transferability and the dissemination of good practice to the other facilities within the EU. Considering the whole life-cycle of radioactivity including the management of the waste generated allows the authorities to increase the safety and efficiency of the water industry by improving and implementing the environmental legislation.

The authors gratefully acknowledge the LIFE+ Programme under the responsibility of the Directorate General for the Environment of the European Commission through the agreement LIFE16 ENV/ES/000437-LIFE ALCHEMIA project.

This publication reflects only the author’s view. The European Commission/Agency is not responsible for any use that may be made of the infromation it contains.