Kent Matthews (Cardiff Business School, Cardiff University) and Zhiguo Xiao (School of Management, Fudan University), discuss regulating Chinese shadow banking and ask if this is throwing the baby out with the bathwater

The conference on FinTech and Shadow Banking in China from 28th to 29th November 2019 in Edinburgh, hosted by Heriot-Watt University addressed two major themes in the provision of non-bank credit in China. The first theme was about the behaviour of firms in entrusted loans and investors in FinTech and Peer-to-Peer (P2P) platforms, and the second theme was about the monetary transmission mechanism and the efficiency of monetary policy interacting with shadow banking in China.

What are Shadow banks?

Shadow banks undertake the same type of business as the commercial banks in the provision of vanilla loans, but they do not fall under the same regulatory orbit as the commercial banks. Shadow banking in China had grown since the Global Financial Crisis from about 20% of GDP in 2008, to a peak of 87% in 2016 before falling back to 64% in mid-2019, in response to the strong de-leveraging policy undertaken by the Chinese Government. The motivation for the scaling back of shadow banking activity stems from a mixture of anxiety from excessive debt creation and the potential fragility to the economy, and the avoidance of social unrest caused by the scandal of fraudulent activities of several P2P platforms. As shadow banking in China is vastly distinct from its western counterpart, the micro mechanism of how shadow banks work, and their macro impact on monetary policy and economic stability are of particular interest not only for academic researchers but also for policy-makers.

Conference on FinTech and Shadow Banking

The conference also heard from speakers that examined the detailed data gleaned from major P2P platforms. There were several behavioural facets of investor behaviour that emerged from an examination of individual data. One finding was that investors identify and mimic experts and provide greater liquidity to projects endorsed by experts. This finding suggests that far from being uninformed; Chinese small investors behave according to the precept of the Efficient Markets Hypothesis.

Dynamic risk preferences were identified on the part of investors that made strong profit gains on an initial investment. They would undertake a less risky, lower-return investment in the subsequent investment indicating loss aversion behaviour. The future of P2P in China, which has expanded by a factor of 60 over 2013-17, was examined in one presentation. The introduction of tough new capital requirements and data privacy on P2P platforms have led to a drastic decline in P2P credit volumes. The industry has also been affected by weak organisational and fraudulent business models that have led to the closure of the majority of operators. The consensus of research was that within a few years Chinese P2P platforms may disappear as a whole. The shrinking of shadow banking, with P2P in particular, even with all their flaws, will have repercussions for the economy in the short-term, as the fund-hungry SMEs, the major employers and growth engine of the Chinese economy, have yet to secure alternative channels of financing.

The macro-level studies focussed on macroeconomic issues and the role of shadow banking in the provision of credit. Franklin Allen showed that the performance of Chinese firms that listed on the domestic stock market, as measured by value-weighted returns, has flat-lined over the last two decades while those that listed in overseas stock markets have seen major gains. However, Chinese investors do not have access to overseas stock markets. The search for yield by ever-richer investors and the hunger for funds by SMEs provide the fertile background for the creation of the shadow banking activity in China. John Greenwood, the Chief Economist of Invesco (the second keynote speaker), showed that real interest rates for depositors in China were negative adding extra pressure on the search for yield.

The Cardiff-Fudan contribution to the conference was in the macroeconomic modelling of the China economy with a shadow bank interaction. The monetary transmission mechanism was examined in two papers that focussed on financial fragility. The first paper posed the question as to whether micro-prudential policy (centred around restrictive regulation), or macro-prudential policy (centred around sound monetary policy), was more effective in minimising the frequency of severe economic slowdowns (SES’s) in China. A SES is categorised as a significant cumulative loss of GDP output relative to a trend. Chart 1 illustrates the three categorisations of SES’s. It was argued that monetary policy of the simple Friedman type monetary targeting, price level targeting, or nominal GDP targeting would be more effective than micro-regulation in minimising distortions to the economy; and of the three monetary policy rules, a nominal GDP target was the most effective in reducing the frequency of SES. A major implication of the study is that tighter monetary policy through a rise in the base rate hits the provision of shadow bank credit to SMEs more than it does the provision of commercial bank credit to SOEs.

A second paper modelled the entrusted loan market within a macroeconomic model for China and argued that the tightening of monetary conditions, through the use of reserve requirements, had the effect of reducing overall credit to the economy but Entrusted Loan Companies reduced credit to SMEs (unaffiliated loans) proportionately more than credit to subsidiaries (affiliated loans). Both papers have the common feature that shadow bank credit and commercial bank credit are complements in the sense that they both move together in response to monetary policy shocks, but they differ in emphasis. 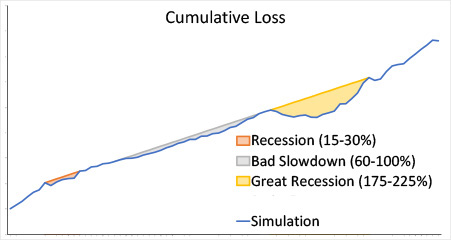 This finding is in strong contrast to the mainstream view that shadow bank credit is a substitute for commercial bank credit. The implication of this is that monetary tightening reduces commercial bank credit provision but increases shadow bank credit provision as the economy substitutes one for the other, hence muting the effect of monetary policy to control credit growth. This mainstream view is one of the reasons for the current clampdown on shadow bank activity. The Cardiff-Fudan research suggests that this policy is misinformed. The clampdown in shadow bank activity, combined with the current deleveraging policy of the Chinese financial authorities, serves only to raise the price of credit to SMEs relative to SOEs, which has the effect of slowing down growth and adding to the fragility of the economy. The undesirable outcome of squeezing shadow bank credit provision is tantamount to throwing the baby out with the bathwater.