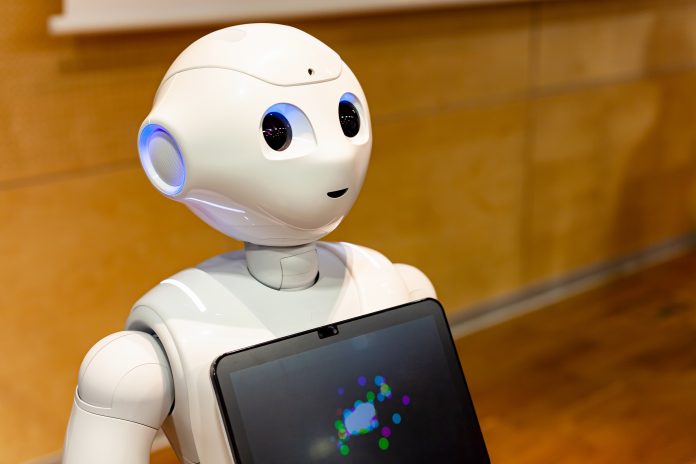 Here, Takahira Yamaguchi from Keio University in Japan explores how different robots cooperate in a multi-robot café, beginning with details about service workflow

Concerning service workflow, to set up a multi-robot cafe with PRINTEPS, data from various sensors and devices, such as a microphone, Kinect v2, and omnidirectional cameras, must be published as Robot Operating System (ROS) topics. Although it is costly to create a programme that publishes topics using ROS libraries, PRINTEPS should support human users to do so. After they describe the service workflow in the multi-robot café shown in Figure 1 and 2, PRINTEPS automatically transforms them to Python programming codes.

Multiple robots cooperate while being given a task to perform from the service workflow in the multi-robot cafe: humanoid robots such as Pepper, Sota, HSR, Furhat and Socibot show facial expressions, a robot arm JACO2 and a CrepeRobot Q.

According to the service workflow, Pepper and Sota recognise the customers at the café entrance and greet them. As PRINTEPS is equipped with sophisticated imaging sensors with real-time feedback, it can differentiate between people entering the cafe, leaving it or just passing the doorway. Also, the image sensors will calculate the number of people in a group, as well as their approximate age and gender. This information gives Pepper the ability to deduce the type of group, for instance, a family or a group of professionals. It might be necessary for Pepper to act differently according to the type of customer.

Next, Pepper guides them to tables and takes orders from them. Pepper had a 3D scanner to detect its own position during movement. In addition, Pepper could move while avoiding obstacles, as shown in Figure 3.

Each table had an omnidirectional camera to detect people using the table to check if the table was unoccupied. The orders include soft drinks and how to decorate on crepe dough. After CrepeRobot Q makes crepe dough, JACO2 prepares the ordered soft drinks and makes the decoration on the crepe dough. When the customer orders their portrait for the decoration, a camera on the PC takes her/his face picture and the image recognition application on a PC extracts its outline and transfers the data to JACO2. JACO2 makes a portrait based on the outline data, squeezing the chocolate tube, as shown in Figure 4. While it almost takes three minutes or more to create a portrait, Furhat explains how each robot works in the robot cafe.

After preparing the ordered soft drink, HSR carries it to the table. When HSR hands it to the customers, HSR can extend its arm and body, approaching the customer, as shown in Figure 5.

When the customers call SociBot to clean up the table, SociBot comes there and they collect trash on the table and put them in garbage boxes with the back of SociBot, as shown in Figure 6.

Concerning the points of programming for business processes in the robot cafe, the majority of these were programmable via the workflow, such that any non-expert user, could have made the changes. Many of the comments were highly detailed, including issues such as leaving personal space between the human and the robot, warning customers of a forthcoming action (for instance wiping the table or other movement) and gesture modification, highlighting the level of complexity involved in designing human robot-interactions.

From the perspective of entertainment processes, many customers were surprised and delighted to see various kinds of robot behaviours and human-robot interactions. When Pepper and HSR move smoothly without collision using the 3D scanner, no collision makes them more surprised and delighted. When they see JACO2 correctly pouring a soft drink, they added an interesting new dimension to their experience. They enjoy the extension of HSR body so much. When SociBot goes around and collects empty cups, many children follow SociBot for a long time.

Two hundred fifty or more customers enjoyed the multi-robot café for two days in October 2018. We are now extending it to the multi-robot restaurant. A robot chef could interact with customers with integrating knowledge-based dialogue and manipulation skills.