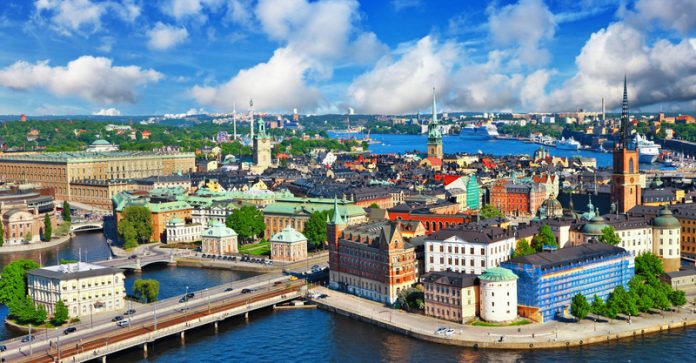 Sweden has reached the climate goals from the Kyoto protocol. In the last decades, Sweden has made substantial reductions in its CO2 emissions, while maintaining high and sustainable economic growth. Sweden is also known for recycling waste. Less than 1% of the waste is landfill, the rest is reused and recycled, to new products or to energy. So what is the secret behind the Swedish success, so far?

The main reason for this success in climate politics is the nation-wide expansion of efficient district heating, supplied by non-fossil energy sources. The Swedish Environmental Protection Agency has pointed out district heating as one of the reasons behind the success. Accounting for half of Swedish heating, district heating has gone from being almost exclusively powered by fossil fuels in the 1980s, to now, 2017, being about 90% renewable and recycled heat.

District heating is an intelligent, environmentally friendly way to heat homes, schools and other premises, etc. As the name implies, district heating comes from somewhere within the district. Instead of every building having its own boiler, district heating is supplied by a central plant which can use advanced methods to run on many different fuels or recover heat from other sectors, for the benefit of households, industry and the environment.

They say that the district heating plant is the heart of a district, spreading warmth right the way around it. In many processes, large parts of energy are set free in the form of surplus heat. The fundamental idea behind modern district heating is to recycle this surplus heat which otherwise would be wasted – from electricity production, from fuel- and biofuel-refining, and from different industrial processes. Furthermore, district heating can make use of many kinds of renewables (biomass, geothermal, solar thermal).

The main reason to invest in district heating in Sweden was to create a healthy environment in Sweden’s cities. While changing the fuels from oil to renewables, the climate benefits came as an extra bonus. In Sweden biofuels, largely residues from forestry account for more than 40% of the energy supplied. District heating also uses waste (around 20%), as well as waste energy from industries (8%) – partly by taking advantage of this excess heat and power.

A big part of the district heating comes from combined heat and power plants (CHP) where electricity and heat are produced at the same place. It’s really an energy-efficient way to use the fuels. In a CHP plant more than 90% of the energy in the fuels is utilised, compared to condensing power plants or only district heating plants with lower efficiency.

The 1991 carbon dioxide tax, consistent political support for renewable energy and a strong forestry sector have all led to the growth of the bioenergy sector. But most important for the increase of district heating in Sweden is probably the strong local governments as key actors in the national climate strategy and the endorsement of energy system efficiency.

District energy is an efficient, environmentally responsible method of heating and cooling buildings. A third of the energy consumption in Sweden is related to heating. But, compared to other EU member states it’s not much. In Europe in general, the energy use for heating stands for around 45%.

The heat savings can cost-effectively reduce the total heat demand in Europe by approximately 30–50%. District heating can capture excess heat, which is currently being wasted and can replace fossil energy sources to heat EU cities. Based on cost and energy considerations, district heating should increase from today’s level of 10% in the EU up to 50% by 2050.

District heating is an opportunity also for Great Britain. The interest is rising and Swedish actors are happy to share their experiences to help on the way to an energy-efficient heat sector.

Swedenergy (Energiföretagen Sverige) is a non-profit industry and special interest association for companies involved in generation, distribution and retail of electricity, heating and cooling in Sweden. Swedenergy has about 400 individual member companies including state-owned, municipal and private sector companies as well as associate members of different types.