In this study, nearly 900 people described an abnormal menstrual cycle after exposure to tear gas – which is legally considered to be “safe” as a crowd control measure

In Portland, Oregon, Black Lives Matter protestors took to the streets for months in 2020. They were in concert with global protests against the murder of George Floyd, by former officer Derek Chauvin. At this moment of reaction to police violence, 15 to 26 million Americans were on the streets in support of Black Lives Matter. Mr Chauvin was recently convicted, a highly rare win for those prosecuting law enforcement officials.

The use of chemical agents on civilians

Portland became a key symbol in the US, with police using tear gas highly regularly to disperse nightly crowds of hundreds. The air remained constantly thick with the chemical agent, as unrest continued. Former President Trump highlighted Portland as a place of concern, praising his armed supporters for heading to the city.

The researchers describe Portland as inundated – sometimes being hit with chemical agents, more than 20 times in one night.

The 1997 Chemical Weapons Convention explicitly allows use for certain law enforcement purposes. Tear gas is indefinitely banned in wars across the globe, but it remains accessible against a civilian population.

Coincidentally since 1997, the US Department of Defense has transferred more than $7.2billion in military equipment to local police. This is done through 1033 programme, which gives excess equipment from the military to police – for a competitively low price.

General Martin E Dempsey, a former chairman of the Joint Chiefs of Staff, wrote on Twitter: “America is not a battleground. Our fellow citizens are not the enemy.”

The story of civil unrest during a viral pandemic is underscored with another, untold story. What could the tear gas, thick in residential neighbourhoods and highly populated areas, do to the human body?

Dr Britta Torgrimson-Ojerio looked to Portland as a living case study, and set out to answer this question. After being exposed to tear gas, hundreds of people were self-describing an instantly, abnormal menstruation, or that their cycle was altered.

The team found that over 54% of the survey participants experienced abnormal menstrual cycles after exposure to tear gas. This meant menstrual cycle timings were completely changed, menses lasted longer or became heavier than normal.

A new observation found in this study is that spontaneous bleeding and chest tenderness was also described as a response to chemical agents. If this result is consistent, it could mean that tear gas can have endocrine effects.

The endocrine system is the collection of glands that produce hormones that regulate metabolism, growth and development, tissue function, sexual function, reproduction, sleep, and mood.

A quiet risk to future reproductive and public health?

Dr Torgrimson-Ojerio looks to what this means for long-term health in people who have been highly exposed to tear gas. She directs that the medical community keeps their eyes open for the potential impact of chemical agents on pregnancy, new-born children, and those with chronic diseases.

She explained: “Based on the menstrual health data presented here, is essential to determine if these agents can act as endocrine disruptors with the potential to impact reproductive health.”

When it comes to the reason why so many millions protested, racism can be considered a systemic public health crisis. Structural racism, in a separate study, has been intrinsically linked to worsening outcomes in the quiet battle that rages on against HIV. And the outcome of the Derek Chauvin trial has been intrinsically linked to the level of activism by BLM supporters throughout the last year.

In light of this racial element, Dr Torgrimson-Ojerio further commented: “Finally, the social injustice that prompted the 2020 Portland, OR protests—systemic racism and police brutality—and the violent interactions between protesters and law enforcement are factors that could contribute to immediate or sustained, novel mental health impacts in communities, which should be further explored.”

Read the full study, which describes several other physical and psychological symptoms.

US study says racial disparities in vaccination problematic for 10 years 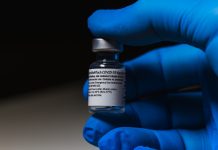 Half of parents may not vaccinate under-12 children against COVID

The pandemic, after the pandemic: Healthcare transformation can help solve staff burnout