When the days turn hot and humid on Tina Hinchley’s 240-head Wisconsin dairy farm, water misters turn on automatically, helping keep the cows cool. Cows can often suffer summer heat stroke, which is why the misters are vital to cow care. Tina also has installed Luna brushes which a cow can use to ease an itch by walking or rubbing against it, not to mention waterbed mattresses to help ensure the animals are comfortable and content.

Despite the on-farm reality of how much farmers care for their stock, as Tina Hinchley demonstrates, animal welfare almost guarantees diverging views among consumers, suppliers, policymakers, and farmers.

Put simply; animal welfare is ensuring animals are treated and cared for humanely. Since the 1960s, a concept known as the (1) Five Freedoms has been a way to evaluate animals’ needs, ranging from freedom from hunger and thirst to freedom from fear and distress. These ‘freedoms’ have been widely used by veterinarians and other professionals when designing animal care protocols and expectations worldwide.

Legislation on animal welfare can help, but regulations often set minimum standards or a one-size-fits-all approach that does not always account for different management practices and cultural or geographic aspects. A non-regulatory approach can be achieved through accreditation schemes set by industry, including retailers. Such voluntary standards that respond to commercial requirements and best practices often go well beyond established regulations.

Farmers know their animals, care for them and, of course, make a living from them. A well-treated animal will be healthier and perform better, which helps to improve the quality and safety of its meat or milk while also reducing production costs. As such, it is in any farmer’s economic interest to look after their animals’ welfare.

Invariably, discussion about animal welfare raises the different approaches between Europe and the United States (U.S.). EU criticism often claims there is a lack of U.S. federal legislation. The reality is that there are laws in place (some dating back to the 1890s) to protect the well-being of farm animals, such as (2) the 1958 Humane Slaughter Act covering transportation and systems at processing facilities. Many states and municipalities have additional laws to ensure that farm animals have a higher quality of life than their predecessors.

Most U.S. producers also enrol in voluntary programs that ensure they raise their animals properly and under a system of ongoing improvement. Cheyenne McEndaffer, Senior Director for Export Services at the U.S. Meat Export Federation, explains, “On the farm side, producers can opt for both individual and site certifications under voluntary programs called the (3) Beef Quality Assurance and (4) Pork Quality Assurance Plus. Participation in both programs is more than 85%, driven by several factors including producers’ drive for continuous improvement, not least to ensure that there will be a sustainable farm or livestock operation to pass on to the next generation.”

Tiffany Lee, Director of Animal Care and Compliance at Clemens Food Group based in Michigan, points out that third-party audits are common for livestock producers. Such audits ensure that high voluntary standards are not diluted over time. Where audit results might fall short of the ideal, suppliers and producers come together to find solutions rather than severing the commercial relationship.

The U.S. think-tank Council for Agricultural Science and Technology (CAST) concluded in a recent (5) report that consumers, scientists, animal industry stakeholders, and policymakers need access to farm animal welfare information to help with their decision-making. At its most basic, an optimum start is to showcase life on the farm and what is involved.

For Tina Hinchley, hosting farm tours is her way of communicating and demonstrating first-hand that what she is doing on her farm is best for her cows, as well as being open and transparent about how she farms.

“Most people don’t realise that farmers naturally bond with the animals they care for and invest thousands of dollars in each one of them,” says Tiffany Lee.

“From an economic, business, and emotional perspective, it is in a farmer’s interest to keep animal welfare on top of their priorities.”

And farmers everywhere know it is on them to treat their animals and land responsibly to ensure the next generation can continue to preserve the land, grow crops and raise animals in a safe and sustainable environment.

David Green has been involved in international issues management in the agriculture and food sectors for more than 30 years. He currently serves as Executive Director of the U.S. Sustainability Alliance, a non-profit organisation representing 24 U.S. farm, fishery, and forestry associations that share a commitment to sustainable practices.

David began his career in Northern Ireland as a beef and pig farmer. He subsequently joined Europe’s most prominent farming magazine in London, where he became News Editor and served as Vice President of EuroFarm, an association of European agricultural journalists. 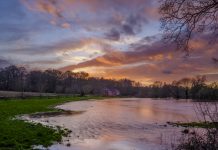 Conserving water is essential to feeding the world