Welcome to the first edition of 2016. As we head into a New Year, growth and jobs remain the key priority for the European Commission – despite the European Union managing a number of crises, such as climate change.

In the President’s New Year Conference, President Jean-Claude Juncker underlined his determination to focus on this priority within the Commission. Juncker called on Member States to pursue the strategy set out by the Commission a year ago and announced major progress from the €315bn Investment Plan.

The edition kicks off with a Foreword from President of the Committee of the Regions Markku Markkula, who outlines challenges that Member States have faced over the years and the importance of sustainable growth and investment to build a better Europe.

Other areas of crisis in Europe at the moment include the refugee crisis and climate change. In this February edition we look at the COP21 Paris conference and hear from organisations as to whether opportunities were missed at the December conference.

We shine the light on COP21 in the energy section, with articles from the European Economic and Social Committee (EESC) and the European Geothermal Energy Council looking at what needs to be done now to turn promises into actions.

The security section focuses on another key crisis. Paris and Brussels saw unprecedented violence last year with terrorist attacks affecting both cities. AG looks at The European Agenda on Security and how biometrics can help in the fight against crime and terrorism.

An article from EUROPOL outlines how the internet has become a powerful tool for terrorists and how the organisation is combating this problem through the European Union Internet Referral Unit (EU IRU). A piece by INTERPOL similarly highlights how biometrics can be used globally to investigate and tackle terrorism.

Other areas of focus in this early edition include: the circular economy; ocean research & climate change; fire safety management; the obesity crisis; digital health for the ageing; and the value of vaccines worldwide.

As always, we hope you find the articles featured informative and useful, and welcome any feedback you may have. 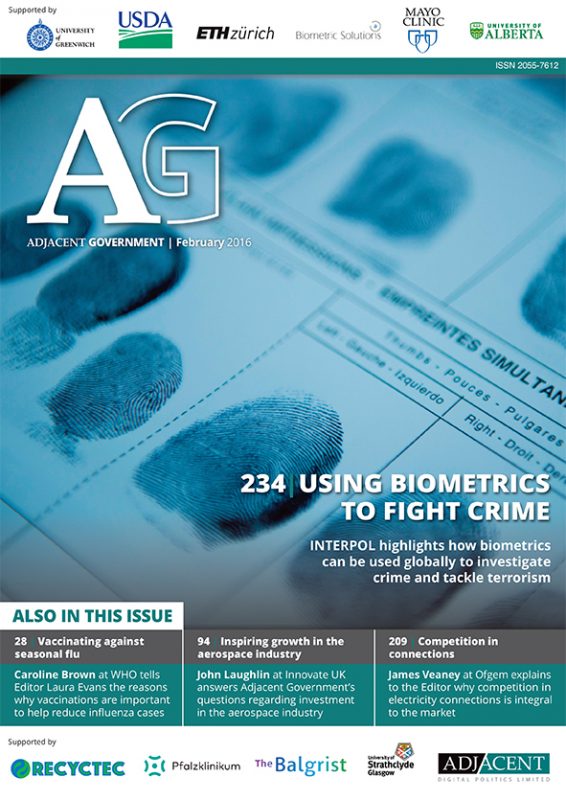