Since the last edition of AG, some major changes have taken place in Europe, mainly in the UK. The result of the EU referendum meant that the UK will indeed be leaving the EU. As well as the Brexit, the UK now has a new Prime Minister. Following the result, David Cameron felt he could not lead the UK and stepped down, opening the door for Theresa May. The former Home Office minister stepped up to the mark and became the new PM last month.

Although a UK publication, AG still intends to keep open the communication between the UK and Europe. And this August issue is no different. In what has been a wet summer, we highlight a number of key issues worldwide, including, eHealth; the future of agriculture; malaria transmission; security; water quality; and, heritage and culture.

The publication kicks off with a foreword from President of the European Committee of the Regions (CoR), Markku Markkula. The CoR co-hosted the 7th Summit of Cities and Regions in Bratislava last month, which I attended. In his introductory foreword, Markkula highlights the key aims from the summit and what Europe must do in order to reconnect cities and regions.

Our health section features a number of key articles, headed up by an exclusive piece from the Commissioner for Health and Food Safety, Vytenis Andriukaitis. In it, Commissioner Andriukaitis highlights to AG how eHealth has the potential to help Europe live healthier and stronger. Professor Alan Johnson from Public Health England also told me in an interview feature about Healthcare Associated Infections (HCAIs).

The health section also looks at key issues such as, efficiency in the NHS; malaria transmission; environmental health; mental health in the workplace and paediatric diabetes.

Gender equality is looked at closely, with an exclusive article from the EU Commissioner for Justice, Consumers and Gender Equality, Věra Jourová. In her piece, Commissioner Jourová takes stock of the progress and the remaining challenges in the way of gender equality. Women in STEM and engineering is also celebrated, in an article from BSRIA, discussing National Women in Engineering Day and how there has never been a more exciting time to be an engineer.

As always, we hope that you find this summer publication of AG informative and useful, and welcome any feedback you may have. 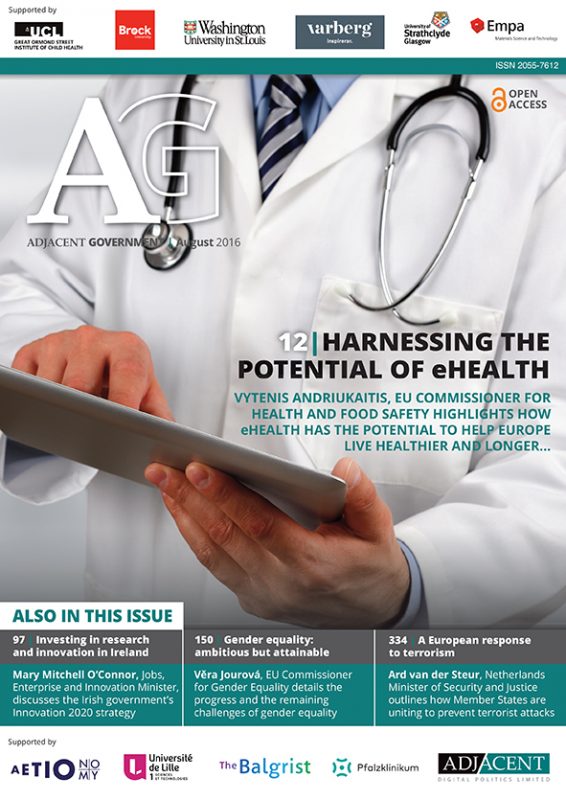