Home eBooks No resurrecting dinosaurs, but we should return to the Ark
View eBook 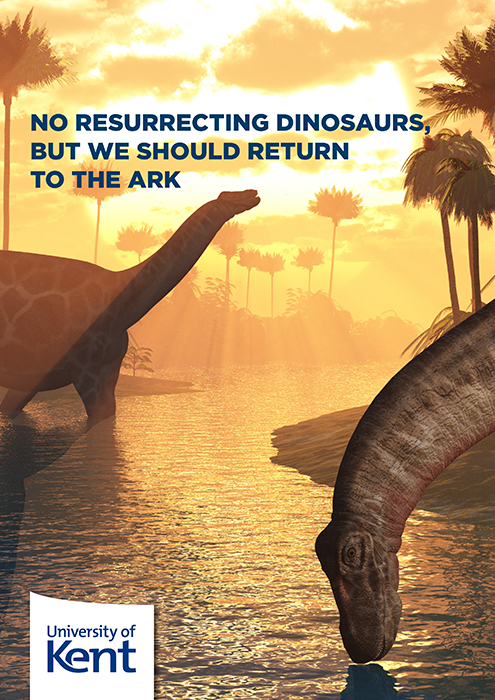 The piece begins by commenting that most people today have an opinion on dinosaurs, whether they love them or are terrified by them. Thanks to the works of Michael Crichton and Steven Spielberg, however, this interest has been extended to dinosaur DNA. The authors add that while it makes a fantastic story, more serious research into DNA from extinct species is taking place, as are important conservational efforts to preserve the DNA of living species.

The authors then debunk the idea that there are scientists out there trying to recreate dinosaurs. They are not, and we are given three reasons why this is the case. One is that the idea there is intact (or even semi-intact) Dino DNA preserved in blood-sucking insects and trapped within amber just doesn’t add up. Another concerns the idea that all you need is an intact DNA strand and you can recreate a whole animal is in the realms of science-fiction.

We also find out in some detail what a Dino DNA structure looked like. It’s really interesting to read that birds did not evolve from dinosaurs, according to the authors. They explain that birds are not closely related to dinosaurs. Birds are dinosaurs. The authors helpfully explain their thoughts on this in more detail, in their own words.

“Dinosaurs first appeared around 240 million years ago and dominated the planet for the next 170 million years. Mammals were around but only in small numbers and most were small and nocturnal. Rather than being the victims of extinction, however, dinosaurs emerged from a series of a significant extinction event in ever more diverse, weird and wonderful forms.”

Near the end of this in-depth study, the authors urge that understanding the genetic basis of different species characteristics is key to understanding our biology. One of the points they raise here is that biobanks represent a priceless resource for the scientific community to study how animals have evolved, why they behave in certain ways, are vulnerable to disease and cause clinical diseases. So, cryopreserving DNA and cellular material from as many threatened species as possible give us hope for the future, in spite of global warming and the oceans filling up with plastic.