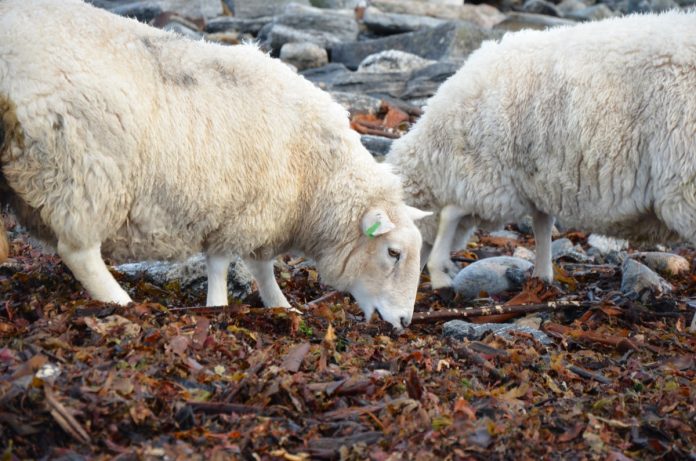 I have my PhD from Norwegian University of Life Sciences, department of animal and aquacultural sciences, in animal nutrition. My field of competence is nutrition and the feeding of sheep. I work within all questions related to sheep nutrition and how feeding impact e.g. weight gain, meat quality and nutritious content of lamb meat, enteric methane emission and the impact of grazing on the landscape. Presently my research is related to use of alternative protein sources to soya imported from Brazil, for example. Seaweed has potential as feed in the diet of sheep, and both seaweeds and legumes are possible ingredients rich in protein that can replace parts of the soya protein.

Seaweed as feed for sheep?

The Norwegian funded project, “Legumes and seaweed as alternative protein sources for sheep” is in the third of four years. Results are ticking in and are gaining a lot of attention. The project is funded by the Norwegian Research Council BIONAR-program. Project leader is Dr. Vibeke Lind from Norwegian Institute of Bioeconomy Research (NIBIO), who works together with other researchers from NIBIO, from Nordland Research Institute also in Norway, Aarhus University in Denmark, Research Institute of Organic Agriculture (FiBL) in Switzerland and Consejo Superior de Investigaciones Cientificas (CSIC) in Spain. Together, the six researchers cover topics from feed digestibility, enteric methane emission, nematodes and farmers’ perceptions towards the use of alternative protein sources.

Norwegian meat production is highly dependent on soya, an imported protein source. Isolated, 94% of all protein in Norwegian concentrate is imported and in 2013, as much as 420,000 tons was imported with an expected continued increase. The high import is mainly due to the demand for higher animal milk and meat production. Of all the ingredients in commercial concentrates fed to Norwegian farm animals, 40% are imported. Norwegian cereal production does not meet the demands for increased production. Prohibition of the use of animal and fish protein subsequent to the BSE crisis in the 1990s produced a gap in the supply of protein to ruminants. Additional protein is needed and imported soya seems to be the cheapest and most suitable. In 1996, the Norwegian government forbade the import and use of GMO-ingredients. Due to the increased demand for feed worldwide, the availability of GMO-free soya is decreasing. Therefore, a focus on locally produced concentrates, covering the demand for protein sources in Norway is essential. Legumes and seaweed are interesting products in this context.

Seaweed suited to conditions in Norway

Seaweed has traditionally been used in Norway in coastal communities as a supplement in the animal ration especially when there was a shortage of forage. Seaweed production is an important industry in Asia where seaweed is fertilised by waste products from both maritime and agricultural farming. Due to geography, environment and the aquaculture production, conditions along the Norwegian coast are well suited for the production of seaweed. In addition, in relation to climate change, the seaweed culture contributes to bind CO2. Seaweed is considered to be a source of bioactive compounds as it is able to produce a great variety of primary and secondary metabolites such as terpenes, phenols and fatty acids, and has bioactivities of pharmacological interest.

Anthropogenic emissions of enteric methane (CH4) are estimated to be responsible for about 30% of the global warming caused by increased GHG concentrations in the atmosphere. Enteric emissions of CH4 from domesticated ruminants, arising primarily from the fermentation of feed in the rumen, are considered to be one of the three largest sources on a global scale. The emission of methane by cattle and sheep represents a carbon loss pathway that results in reduced productivity. If the energy could be rechannelled into weight gain or milk production, it would increase production efficiency while reducing methane emission to the atmosphere. In Norway, GHG emissions from farming account for 8% of the total national emissions with ruminant production being responsible for about 60%.

Gastro-intestinal nematodes represent a major threat for ruminant husbandry, inducing considerable economical and animal welfare issues. Since the 1960s, GIN has been controlled by broad spectrum anthelmintics. Their prophylactic and therapeutic use has enabled an intensive sheep production that is sustained up to the present. Meanwhile, however, nematode populations resistant to the main anthelmintic families have frequently emerged. Beyond the impairment of animal welfare, the use of partly ineffective anthelmintics reduces the carcass value of lambs about 10-14% and considerably extends the time until the lambs reach target live weight. Research has focussed on alternative approaches to control GIN and one promising approach is based on the use of legumes containing condensed tannins.

Farmers need to adapt with alternative feed sources for sheep

The agriculture industry and individual farmers are exposed to constant changes in economic, managerial and climatic and environmental conditions. This may have increased the industry’s adaptive capacity. At the same time, research shows how farmers vary in their responses and adaptive strategies, and that certain conditions and individual attributes lower the likelihood for using the opportunities from changing circumstances. Further investigations of the perception of new feed components among the farmers is therefore important in order to gain knowledge about constraints and barriers that may meet such an introduction.

The first step in the project was to find different species of seaweeds. Eight species were handpicked along the coast close to Bodo (67°16′48″N 014°24′18″E). After washing off salt and minerals (e.g. sand) the seaweeds were dried before analyses. Digestibility and protein content were the most important factors to find before deciding which species to continue with in a feeding trial. At present, lambs of Norwegian white sheep are fed four different diets to investigate growth rate. In addition to a control diet, either seaweed, white clover or soya pellets are included as protein source in the three experimental diets. In addition, the lambs are tested for enteric methane emission. Another group of lambs are fed a control diet including either soya pellets or seaweed to investigate if diet can reduce the level of nematodes. The project will end in 2017.
Dr. Vibeke Lind