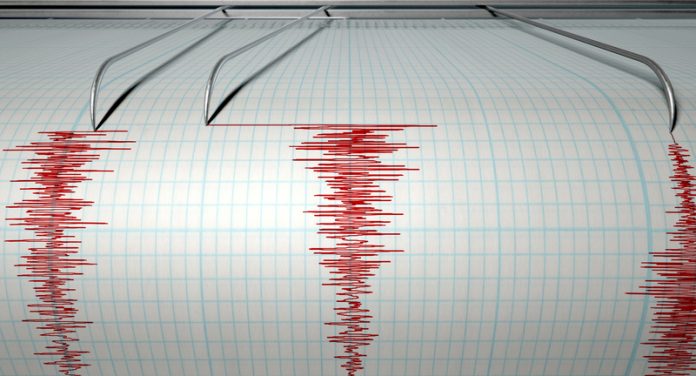 The project’s aim is to provide reliable answers to the growing needs to protect the citizen and preserve the human habitat from environmental emergencies and natural disasters.

APhoRISM has developed innovative methodologies and solutions based on the integration between space and ground based sensors, to support the management of seismic and volcanic crises. Within these latter topics, the project addresses specific domains like the safety of civil aviation and the earthquake crisis management. This is part of the European Space Policy and long term strategy to strengthen the EU capability to make actions and carry out solutions toward the disaster mitigation and management.

APhoRISM has 2 research branches. The first one deals with the generation of products for characterising the volcanic ash cloud, and the second one is focused on the production of urban damage maps for supporting emergency management during seismic events. Actually, these 2 branches are completing the development of 2 new methodologies, called MACE – Multi-platform volcanic Ash Cloud Estimation, and APE – A–Priori information for Earthquake damage mapping, for the 2 thematic areas, respectively.

The MACE procedure, developed in the sphere of the APhoRISM project, exploits the complementarity between GEO (Geosynchronous Earth Orbit) sensor’s platforms, LEO (Low Earth Orbit) satellite sensors and ground measurements, to improve the ash detection and retrieval and to fully characterise the volcanic ash clouds from their source to the atmosphere. The basic idea behind MACE is to calibrate and integrate, in a novel manner, the volcanic ash retrievals at the space-time scale of typical geostationary observations using both the LEO satellite estimations and in-situ data. Moreover, the possibility to detect the volcanic clouds during particularly cloudy sky conditions has also been investigated. MACE has been applied to different recent eruptions as the Eyjafjallajokull (Iceland) 2010, Etna (Italy) 2013 and 2015, Holuhraun (Iceland) 2014, and Calbuco (Chile) 2015 events.

As an example, Figure 1 shows the ash mass and ash concentration time series maps, obtained from MACE for the 23 November 2013 Etna test case. Because of the volcanic ash cloud particles’ harmful effects on aircraft engines, the ash concentration classification is used to highlight the volcanic cloud regions in which the ash is more concentrated, than more dangerous for aircraft. The classification shown in Figure 1 (low, medium and high) is based on the European Aviation Safety Agency (EASA) directives. 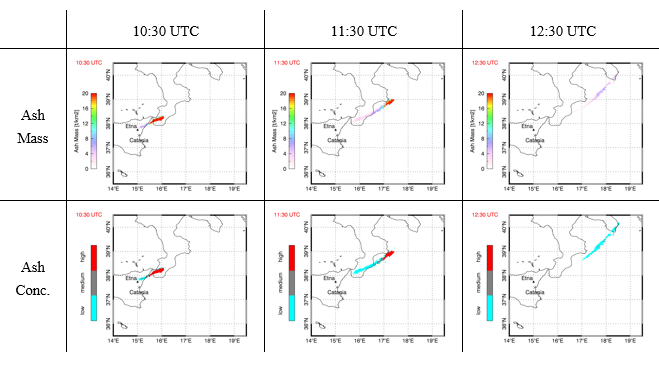 Prompt response after an earthquake is of primary importance to save lives and effectively manage the emergency. A rapid damage mapping can provide a valuable support to rescue teams and to all the stakeholders involved in the emergency management cycle. In such a context, satellite remote sensing has already proved its potential to contribute to post-earthquake damage assessment. The APE method is developing new procedures based on the integration of satellite-derived change indexes, and ground data to provide damage assessment maps, at different scales. In particular, APE exploits change detection maps from satellite imagery, including optical and Synthetic Aperture Radar (SAR) images, and a-priori information layers that include geological data (such as soil type, landslide and liquefaction susceptibility) and structural, geometric and constructive characteristics of buildings. The main goal of APE is to investigate the potentiality of such a-priori information for increasing the reliability and accuracy of earthquake damage maps.

The seismic theme of APhoRISM is centred on 4 case studies, where the integration methodologies have been setup and tuned. In particular, the seismic events are: Izmit, Turkey, earthquake (Mw 7.4) that hit the Marmara Sea region on August 17, 1999; the L’Aquila (central Italy) earthquake, a Mw 6.3 event that took place on April 6, 2009; the disastrous event of Haiti (Mw 7.0) occurred on January 12, 2010; and the Mw 6.3 earthquake that damaged the city of Christchurch, New Zealand (February 22nd, 2011). These earthquakes are characterised by different mechanism, dataset, type of buildings and ground input data. Such differences are very important to investigate and to analyse the performances and robustness of the APE methodology.

Figure 2 shows an example of a damage map for the Haiti case. In particular, it reports the so-called quantity Collapse Ratio, i.e., the ratio between the number of collapsed buildings and the total number of buildings within a city block, for Port-au-Prince. This type of map is useful when very destructive events occur. The map has been derived by integrating 2 different type of images captured by Synthetic Aperture Radar, optical sensors on board of space satellites. 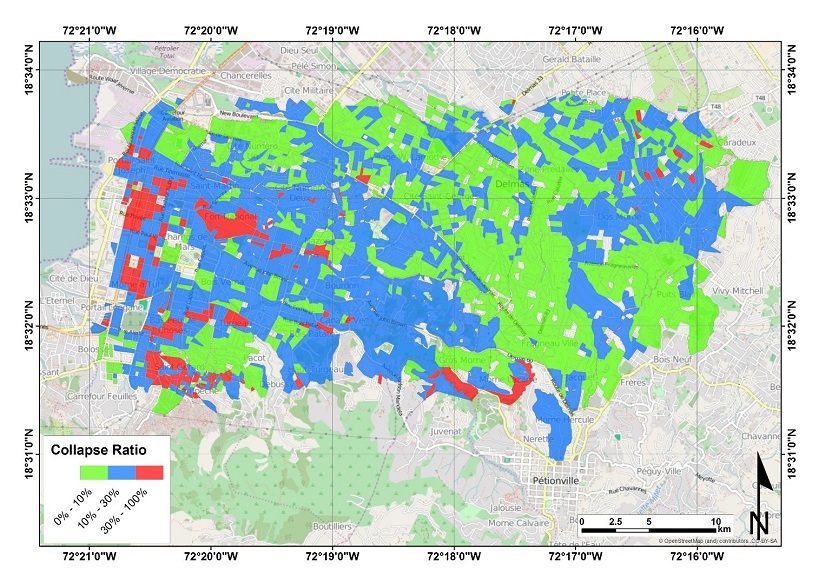