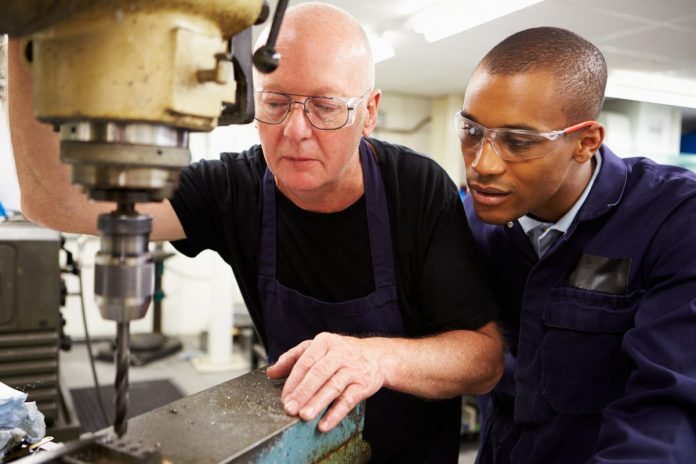 Earlier this year Adjacent Digital Politics looked at the value of apprenticeship schemes and if they were really beneficial for young people. While there are undoubtedly some issues with the way the system works, namely surrounding pay rates, apprenticeships are generally a good thing for school leavers who do not wish to undertake higher education. However, a new report has revealed the majority of those benefiting from apprenticeship schemes over the last five years has not been young people, but rather individuals over the age of 25.

Apprenticeships have been a major focus for the Conservatives—both under the Liberal Democrat coalition and now under a Tory majority. There is little doubt these schemes are popular. One million people applied for 85,000 vacancies last year. However, this is not the first time criticism has been levelled at the scheme. It ran into some trouble earlier in the year after a report claimed apprenticeships were exploitative.

Despite being heralded as a way to train and earn, it was reported in February that many people who embarked on an apprenticeship could barely afford to cover the cost of getting to work. The study titled “Forget me not” was conducted by the National Union of Students and highlighted some of the issues with the scheme, in particular amount young people are paid.

Speaking at the time of the report’s release, NUS Vice President (Further Education) Joe Vinson said: “This report shows that we could have a whole generation being shut out of vocational education because of financial constraints.

After concerns over the pay of apprentices, a new report has now revealed more issues with the system. This time the debate is that apprenticeships are failing to address youth unemployment.

Commissioned by the Local Government Association (LGA) and the Institute for Public Policy Research (IPPR), the study showed that 42 per cent of all apprenticeships created in the last five years were filled by people over the age of 25. Given these schemes are aimed at helping youngsters into working world through advanced training schemes this figure is a little concerning. That is not to say the scheme shouldn’t help adults, but when it is touted as a route to address youth unemployment and to help school leavers into the world of work this seems counterproductive.

The report criticised current policy, which it said enabled businesses to train established workers, rather than unemployed young people.

In fact, the data showed the level of the problem clearly. During the period 2013-14 a total of 57 per cent of under-19s applied for advertised apprenticeships, but only 27 per cent were awarded. Comparatively, over-25s made up seven per cent of applications, but filled 37 per cent of the vacancies. These figures are mind boggling and show clearly how the system is failing to help young people into work. It also brings up the issue of why employers are not seeking young apprentices, but those with potentially more experience in the workplace.

Before the end of parliament in 2020 the government plans to create a further three million apprenticeships. However, the report from the IPPR and LGA highlights just how apprenticeships are failing to work for young people. It also showed the difficulty getting into the system, as research found that 67 per cent of intermediate-skilled apprentices were already employed by their company when they were awarded an apprenticeship.

Luke Raikes, research fellow at IPPR North, said: “A high quality apprenticeship system could be used to combat youth unemployment and drive higher productivity, but the system we currently have is failing to deliver.

“There is a big gap between the function apprenticeships should have in our economy and how they’re being used in practice: the majority of apprenticeships are being used to train older people, and those who are already employed at their company, instead of taking on young people out of work.”

Additionally, over a third of apprenticeship created in the last five years were at advanced or higher levels, with the majority of places at the intermediate level. The data also showed 24 per cent of 16-18 year olds and 15 per cent of intermediate apprentices were not being paid the minimum wage.

So what does the report recommend to overcome these issues? It wants to see local apprenticeship hubs created, which should have full control of the apprenticeship grants from central government. This would enable employers to tailor apprenticeships to meet the needs of local employers and the economy more efficiently.

Economy spokesman for the LGA Councillor Peter Box, said: “A good apprenticeship can give young people the experience, skills and understanding that can often lead straight into a full-time job.

“At present, too many new apprenticeships are low skilled and taken by older people already in work with their employer.”

Apprenticeships will undoubtedly remain popular in the UK as an alternative way into the workplace, but the concerns raised about the system need to be addressed. The cost of higher education remains a barrier for many young people and they are reliant on schemes such as apprenticeships to help them into the world of work.