Major depressive disorder (MDD) is the leading cause of disability worldwide, affecting 300 million people with a lifetime prevalence of 15%. Approximately one-third of all major depressive disorder patients fail to respond to currently established treatments based on medication and psychotherapy, thus falling into the category of Treatment-Resistant Depression (TRD) patients. In addition, 3 out of 4 patients in low and middle-income countries receive no treatment.

Depression is considered a neural network disease, with symptoms arising from dysfunctional network behaviour rather than a single brain region. Neuromodulation-based non-chemical therapies, where neural activity is altered employing external stimuli, have been approved as alternative treatments for TRD patients. However, no existing therapy was yet able to access and manipulate the complex neural pathways related to symptoms of depression.

Electroconvulsive therapy (ECT), repetitive transcranial magnetic stimulation (rTMS), and vagus nerve stimulation (VNS) are approved treatments for treatment-resistant depression, while deep brain stimulation (DBS) is currently being researched as an alternative treatment with promising anti-depressant effects. However, due to either poor spatial resolution (ECT, rTMS) or low network coverage (VNS, DBS), there is a high variability of outcomes, and average remission rates in clinical trials are still lower than 30%.

Low-Intensity Focused Ultrasound (LIFU) is an emerging neuromodulation method with disruptive potential since it allows for non-invasive stimulation across the whole brain with milimetre precision. At the core of this method is the generation of focused ultrasound waves, which are acoustic waves with a frequency larger than the human auditory limit of 20 kHz. By connecting a pulse generator to an ultrasound transducer coupled to an acoustic lens, an ultrasound beam can be transmitted through the skull and focused in a pre-determined brain location. To minimize the attenuation through the skull, the ultrasound frequency is normally set to the range of 500 kHz and 1 MHz, which defines the spatial resolution to the millimeter range, similar to the ultrasound wavelength.

Still, to account for the variability in skull thickness and its impact on the distortion of the ultrasound beam, transcranial LIFU stimulation is typically coupled to an fMRI machine for image-guided neuromodulation. The depth of the ultrasound focal spot is directly proportional to the diameter of the ultrasound transducer. For example, for deep brain transcranial LIFU stimulation at a depth of 10 centimetres in the brain, a transducer with a diameter of at least 4 centimetres is required. The ultrasound waves can also be steered into different brain regions by using ultrasound phased arrays: arrays of miniature ultrasound transducers that are driven with alternating voltages with specific time delays, such that the transmitted waves constructively interfere only at the desired focal location. This way, not only can LIFU achieve high-penetration depth while remaining non-invasive, but it can also be programmed by software to precisely position the focused beam anywhere in the brain.

Due to the unmatched combination of non-invasiveness with focal precision, LIFU is being explored for a great variety of neurological diseases, such as Parkinson’s and epilepsy. The use of LIFU for MDD has only recently started but already shows promising results, in
particular in improving mood and worry in depression patients. Further technological developments must be pursued to strengthen the promise of LIFU for the treatment of MDD. Firstly, the current treatment paradigm based on fMRI-guided LIFU neuromodulation requires the patients to visit the hospital once per week, on average, to receive the treatment.

This limits the treatment possibilities and may lead to highly variable outcomes between patients due to the variability of symptoms over time. Secondly, there are currently no established procedures for functional brain mapping to assess the progression of MDD symptoms in relation to the LIFU treatment. Given the complexity of the neural circuits involved in MDD symptoms, the ideal LIFU technology would allow patients to receive treatment in a closed-loop fashion without disrupting their daily life by reacting to a deviation from normality in the exact location within the MDD neural circuits. 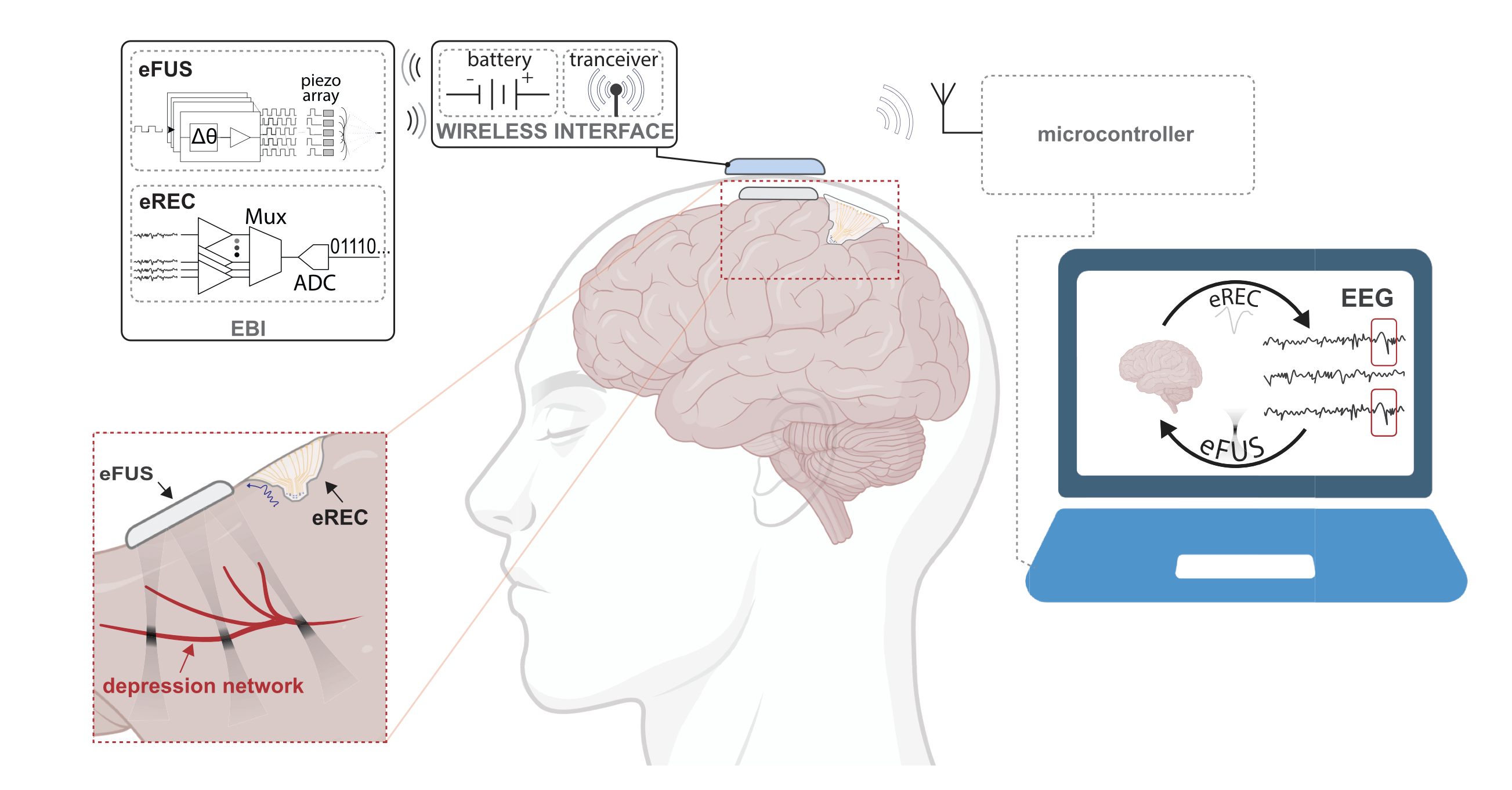 From the hospital to daily life – a personalised treatment for MDD

With the developments of semiconductor technology and the emergence of the field of brain-machine interfaces, there is today a plethora of miniaturized brain implants being researched for mapping the electrical activity of the brain and how it relates to brain function. In parallel, the miniaturization of ultrasound systems from handheld probes to wearable and implantable devices is also underway. There is, therefore, great potential in combining electrical recording and ultrasound stimulation systems into a miniaturized, minimally invasive and continuous closed-loop treatment of major depressive disorder. This massive miniaturization enables the epidural deployment of this brain interface (EBI) below the skull and above the dura mater.

Despite the increased invasiveness when compared with transcranial LIFU, this approach is considerably less invasive than DBS and would allow the treatment to be performed continuously without disrupting the daily life of the patient. Furthermore, comparing to DBS, this minimally invasive approach has the potential to largely increase patient adoption if the risk-benefit profile is favourable. Finally, epidural deployment of the device comes with two other great advantages: firstly, by bypassing the skull, LIFU stimulation can operate at one order of magnitude higher ultrasound frequencies towards higher spatial resolution; secondly, microelectrode arrays in close proximity with the brain allows for the acquisition of high density and high fidelity epidural electrical signals towards closed-loop personalized treatment.

The proposed epidural device still faces technological and adoption hurdles that must be addressed. Firstly, the power usage of the device must be optimised to extend battery life and minimize the battery size. Secondly, wireless connectivity to the device must be implemented, both to program the LIFU device to the desired stimulation settings and location and to obtain the electrical recording data from the brain towards closed-loop operation. Algorithms for biomarker identification based on the recorded data must also be investigated both to give more insights into the mechanisms of major depressive disorder as well as to control the stimulation in a closed-loop fashion.

Addressing these challenges can transform the lives of millions of MDD patients and pave the way to a new generation of brain interfaces for a great variety of neurological disorders.

The project UPSIDE has received funding from the European Union Horizon-EIC research program under the call “HORIZON-EIC-2021- PATHFINDERCHALLENGES-01”, under grant agreement no. 101070931 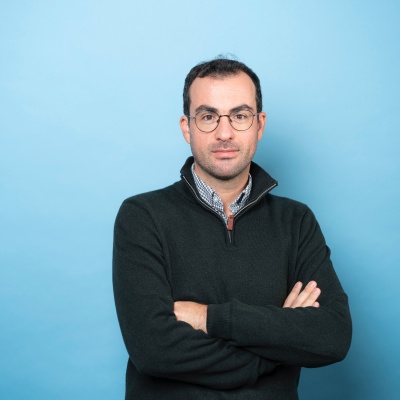