How useful are Assisted Target Recognition algorithms and training for improving the detection performance of customs officers?

Automated Comparison of X-ray Images for Cargo Scanning (ACXIS) is a research project funded by the European Union under the 7th Framework Program. The ACXIS consortium (including CASRA) conducts research and development for improving effectiveness and efficiency of cargo screening.

As part of this, ACXIS partners are developing Assisted Target Recognition (ATR) methods to automatically detect potentially illicit goods by means of dedicated algorithms. For this purpose, first the Dutch Customs Organization (DTCA) and the Swiss Federal Customs Administration (FCA) defined several illicit goods detection scenarios. The consortium then prioritized and selected scenarios, resulting in four ATRs being developed with Smiths Detection in the lead. As an example, methods for cigarette detection based on texture analysis have been developed and show excellent first results.

How effective ATRs are does not only depend on the performance of the automatic algorithms. It is also important how the information provided by the ATRs is implemented into the screening process. The idea within ACXIS was that ATRs support visual inspection of customs officers by directing their attention on suspicious areas in the X-ray image and help decision making. In this implementation scenario, the screening officer still makes the final call on whether the cargo needs further inspection. Therefore, whether and how much the detection performance of the screener improves due to ATRs depends on a variety of factors. A key component of the ACXIS project was therefore to evaluate the designed implementation of the ATRs.

Forty-six employees of the DTCA and 21 employees of the FCA took part in the study, during which time participants agreed to two training sessions of 15 minutes per week over the course of four months.

This latest ebook from Empa shares insight into the ACXIS study, including the results of the project. 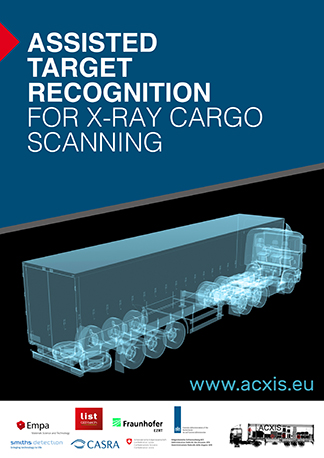