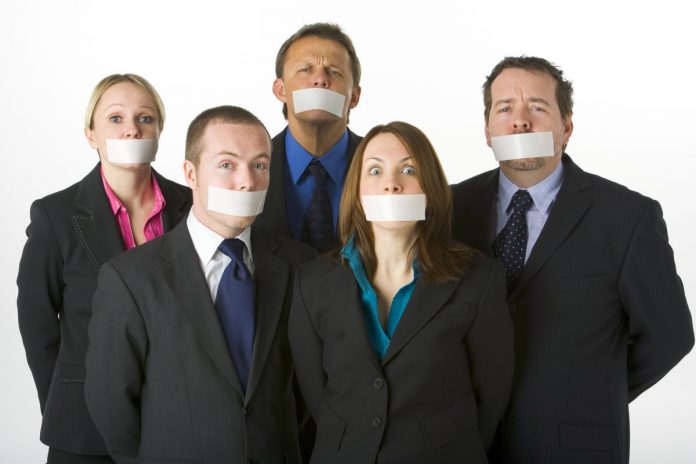 According to the FDA union, civil servants are being silenced by new rules that change how they interact with the media…

The change, which has been brought in by Cabinet Minister Francis Maude, has caused something of a furore with the FDA.

The union, which represents senior managers and professionals in the public service, has expressed dissatisfaction over the ‘draconian’ measures. Part of the anger stems from fact the new rules mean government employees can now only speak to the media with prior permission from a minister. The FDA said this would restrict whistleblowers.

Furthermore, the FDA said the move would create a potential conflict of interest between members needing to defend themselves and the minister who is responsible for authorising their contact with the media.

General Secretary Dave Penman said: “This announcement is an unnecessary, unworkable and unjustified restriction on the work of the civil service.

“Survey after survey shows that civil servants are trusted more than politicians, yet this change now requires ministerial authorisation before any civil servant – from a prosecutor being asked for comment outside of court to a job centre manager dealing with a local news story – can respond or make contact with the media.

“Guidance already exists to regulate contact between civil servants and the media.

“There has been no justification for this draconian change, which seems designed to intimidate civil servants into silence. This panicky last-minute decision appears to be borne out of ministerial paranoia rather than a legitimate attempt to improve public services.”

The news comes just a fortnight before parliament is set to enter purdah, the pre-election period during which time central and local government are prohibited from making announcements that could be advantageous to candidates or parties.

The change to the civil service code will mean all 447,000 civil servants will be required to secure authorisation from the relevant minister to have any contact with the media. Failure to do so will result in disciplinary action.

Simon Claydon, deputy director of civil service work reform at the Cabinet Office sent a letter on Tuesday to all human rights directors. The letter stated that the Head of the Civil Service, Jeremy Heywood, had sent correspondence to permanent secretaries across Whitehall.

He wrote: “The minister for the Cabinet Office has published a revised civil service code incorporating an amendment requiring all civil servants to seek ministerial authorisation for any contact with the media in an official capacity.

“The civil service management code has also been amended in support of this change.”

Civil servants, who talk routinely to the media as part of their job role, will no longer be able to do so without gaining permission. Union officials state this new rule could also be used to prevent union activity.

A spokesperson for the Cabinet Office said the new rule clarified an existing requirement that states civil servants must clear material for publication in advance.

“There is no change to the important rights of individuals under whistleblowing legislation which is protected by statute.”

Whether the new rules are simply tightening existing rules or not, there is something a little concerning about the way in which it has been implemented.

Furthermore, it is worrying the new rules prevent civil servants from discussing anything with the media. It is understandable that ministers wish to be involved in signing off publications intended for public use, but it is the way in which the measure completely silences civil servants that is disconcerting. It certainly does not seem in the interest of transparency, nor does it seem in-keeping with the government’s push to protect whistleblowers.