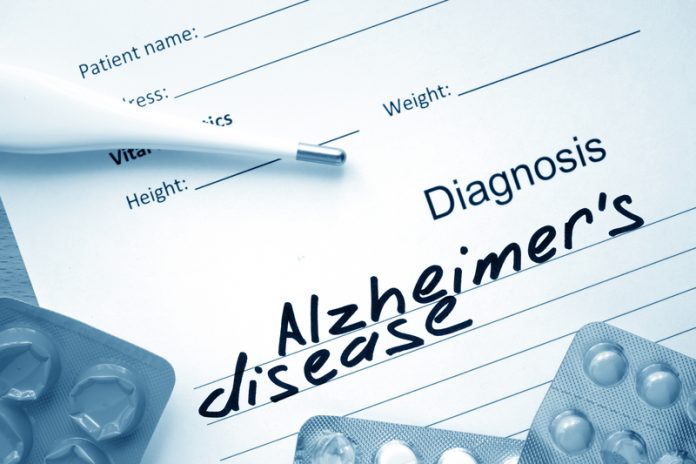 Alzheimer’s disease (AD) is the most common form of dementia in those over the age of 65, and currently ranked as the sixth leading cause of death in the United States. AD is one of the most persistent and devastating dementing disorders of old age, because it eventually leads to a complete loss of memory and of the ability to function independently. The hallmarks of AD are the retention of plaques and tangles in the brain; plaques are protein beta-amyloid (Aβ) that build up in the spaces between nerve cells, whereas tangles are twisted fibers of protein tau that build up inside the cells. These 2 abnormal structures are prime suspects in damaging and killing nerve cells. Currently there are only a few interventions that have been approved for the treatment of AD, but none has shown a clear effect on disease progression.

The risk for AD did not begin with the build up of the plaques and tangles. Research has shown that brain metabolism may already decline decades before the retention of Aβ and tau. As the human brain has the highest energy demand among all other organs, the disruption of brain metabolism and energy supply could cause devastating effects on brain functions, including neuronal cell death, brain volume shrinkage, and ultimately memory impairment.

The risk factors for brain metabolism dysfunctions include genetics, age and lifestyle. For example, apolipoprotein ε4 (APOE4) allele is the strongest genetic risk factor for AD. Recent studies have shown that cognitively normal carriers of the APOE4 allele have abnormally low glucose metabolism in the same brain regions as patients with AD. The metabolic abnormality was observed in young (20-39 years of age) and late-middle-aged (40-60 years of age) APOE4 carriers, who have intact memory and are free from Aβ or tau pathology. Brain glucose metabolism also declines with age, independent of genotypes. Therefore, advanced age has been suggested as one of the greatest risk factors for AD. Further, the metabolic abnormality is exacerbated with increased body weight. Clinical data have shown that individuals with obesity (Body Mass Index- BMI greater than 25) are associated with 2-3 fold increase in AD risk, compared to those with a normal BMI.

Obesity is a strong risk factor for other metabolic complications such as Type 2 Diabetes (T2D). Emerging evidence has shown strong association between T2D and AD. In particular, individuals with T2D display significant memory impairment and attention deficits on cognitive testing compared to control subjects. The major symptom of individuals with T2D is insulin resistance, which includes: impaired glucose metabolism, abnormal blood sugar levels and dysfunctional insulin signalling. When insulin resistance occurs in the brain, it directly leads to disrupted glucose utilisation, impaired energy supply to neurons and ultimately cognitive defects. Furthermore, high blood sugar causes inflammation, which could trigger Aβ and tau production, damage brain cells and accelerate AD-like pathology to develop. Interestingly, AD patients, whether they have T2D or not, also show insulin resistance in the brain, which makes AD being recognised as ‘type 3 diabetes’.

To preserve brain function and reduce incidence of neurological degeneration, it is essential to find ways of maintaining or restoring brain metabolism. Nutritional interventions have shown to be effective to preserve metabolic homeostasis. In our laboratory, our goal is to better understand the effects of caloric intake on brain metabolism in aging, APOE4 and diabetes. While caloric restriction (20-40% reduced caloric intake) has been shown to increase the life span and health of many species, the effects of it on in vivo brain functions is still largely unexplored. Using neurological imaging techniques, we found that rodents with calorie-restricted diet had reduced glucose uptake, but an increase in the level of medium chain triglyceride ketone bodies. Their brain used ketone bodies as an alternative fuel substrate to sustain energy supply and reduce inflammation. Importantly, this shift in metabolism was found to be associated with the preservation of memory and brain structure in aging rodents. In animals modelling human Alzheimer’s disease, caloric restriction has been shown to increase insulin sensitivity and reduce Aβ accumulation. We also demonstrated that restoring brain glucose metabolism is critical to prevent learning deficits developed in young mice that carry human APOE4 genes. In another study, instead of caloric restriction, we fed mice a ketogenic diet with diabetes and AD phenotype. We found that the mice had reduced Aβ retention, lowered blood sugar, improved brain metabolism and circulation, and retained learning and memory capacity. These research findings indicate that proper nutrition plays a crucial role on maintenance of energy balance and preservation of brain integrity.

As the prevalence of obesity and T2D are increasing on a global scale, it is a pressing need for the societies and governments to develop programs to educate their citizens on how to choose healthy diets, and to ensure access to healthy, high-quality food. If the importance of a balanced diet can be instilled in an individual at a young age, it is far more likely to stay with them throughout their lives. And, significantly, this information would be cascaded down to their children, thereby becoming common practice for all society. With the awareness of the nutritional impacts on brain metabolism and the practices of healthy lifestyle, the risk of neurological diseases such as Alzheimer’s – or type 3 diabetes – can be reduced and the onset of dementia can be prevented.

Sanders-Brown Center on Aging, Department of Pharmacology and Nutritional Sciences, and Department of Biomedical Engineering, University of Kentucky

Meteorite impacts: The good and the bad

Application of the marine magnetic survey