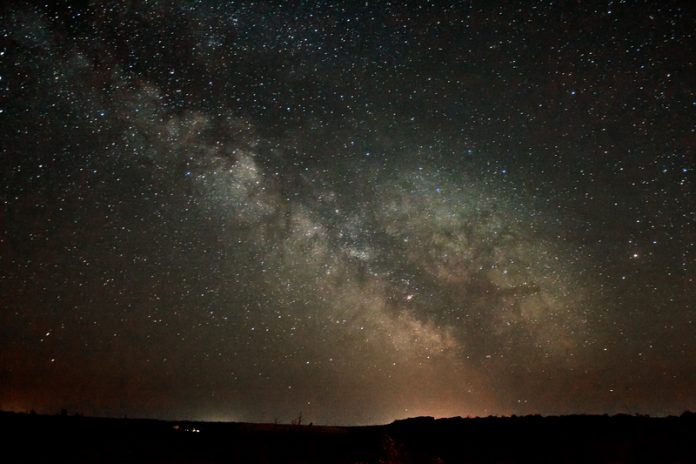 What is the nature of the mysterious “dark energy”? How does it relate to the ubiquitous “dark matter”? These are some of the key open questions in cosmology, which the group led by Professor Luigi Guzzo at the National Institute for Astrophysics and the University of Milan in Italy, is addressing in their research. Their work is supported by a 5-year ‘advanced grant’ of €1.7m by the European Research Council (ERC). Findings of this project, dubbed Darklight, will add an important piece to the puzzle of the origin and evolution of the Universe.

We live in an expanding Universe: galaxies, agglomerates of hundred billion stars like our Sun, appear like glued on a cosmic fabric that expands with time. This was first quantified by the work of Edwin Hubble and collaborators in 1929, when the expansion of the Universe was discovered. It implies that, if we rewind the movie back in time, there must have been a specific moment in the distant past when all matter and energy were concentrated in one point, what is called the “Big Bang”.   Much more recently, (1998) researchers made an unexpected discovery: about 7 billion years ago the expansion rate of the Universe started increasing again, entering an acceleration phase that requires a kind of “dark energy” to drive it – a phenomenon that still remains obscure. This discovery led to the 2011 Nobel Prize to Perlmutter, Riess and Schmidt and added a final piece to complete the puzzle of what we call the Standard Cosmological Model, based on Einstein’s theory of General Relativity.  Yet, it implied the existence of another obscure and not understood ingredient.

Large-scale “redshift surveys”, reconstructing the large-scale distribution of millions of galaxies in space and time over enormous volumes represent one of the pillars of this standard model. The way galaxies are distributed in space, their level of inhomogeneity at different scales, are intimately connected to the Universe properties.  However, we observe them projected on the sky: their 3D distribution is reconstructed by measuring the “red-shift” of their spectral lines with respect to the laboratory value, induced by the expansion of the Universe. This is proportional to their distance and represents nowadays a formidable tool to map the Universe structure.  Even larger redshift surveys, using spectrographs capable of observing thousands spectra at once, will start in the coming years; they aim at high-precision measurements of the expansion history – which follows the behaviour of dark energy – and of the growth rate of cosmic structures, which may evidence deviations from Einstein’s gravity.

With Darklight, an international team led by Professor Guzzo has been developing new mathematical and statistical tools to meet the required high levels of precision and accuracy for the cosmic measurements. These novel methods are tested on large numerical simulations and then applied to new data, such as those provided by VIPERS, a large redshift survey of ~100,000 galaxies, recently completed at the European Southern Observatory (ESO), under coordination of the same team. VIPERS (of which a section is shown in one of the figures) used the ESO Very Large Telescope in Chile to reconstruct the 3D galaxy distribution within an unprecedentedly large volume, at an epoch when the Universe was about half its current age (i.e. around 7 billion years old).  The central part of Darklight is to develop the techniques that will eventually help scientists to fully exploit such surveys, in particular for the next generation of projects promising to collect samples of tens of millions of galaxies. This is in particular the case of the European Space Agency Euclid mission, of which Professor Guzzo is one of the science coordinators.   “Euclid will be launched at the end of 2020 and will map the distribution of 50 million galaxies, as well the distribution of dark matter through the gravitational lensing effect, over 15,000 square degrees, i.e. one-third of the sky”, says Professor Guzzo. “With so much data, statistical errors on the parameters describing the cosmological model – as e.g. the density of matter and dark energy – will be measured to exquisite precision.  Techniques like those we are developing with Darklight will make sure that, in parallel, the systematic errors that are intrinsic in our modelling of the observed effects will not jeopardise this precision; this is a daunting task given the predicted tiny size of the error bars”.

Such a combination of new data and new analysis techniques will allow us to understand how, from its original state, the Universe has taken its current form and how galaxies, clusters and the cosmic web have developed under the joint effect of dark matter and dark energy.  It will represent a decisive step to understand the origin of these mysterious dominant components – dark matter and dark energy – whose existence needs to be advocated in the standard cosmological model. While the recent discovery of gravitational waves represents a further impressive confirmation of Einstein’s theory of gravity, the exploration of the Universe by galaxy surveys will allow cosmologists to verify whether General Relativity also identically holds on the largest scales in the Universe, or rather its equations need to be further generalised.  Alternatively, we may learn the nature of dark energy as perhaps the final stage of a relic energy field from the Universe first moments. Needless to say, either explanation would revolutionise the world of physics. 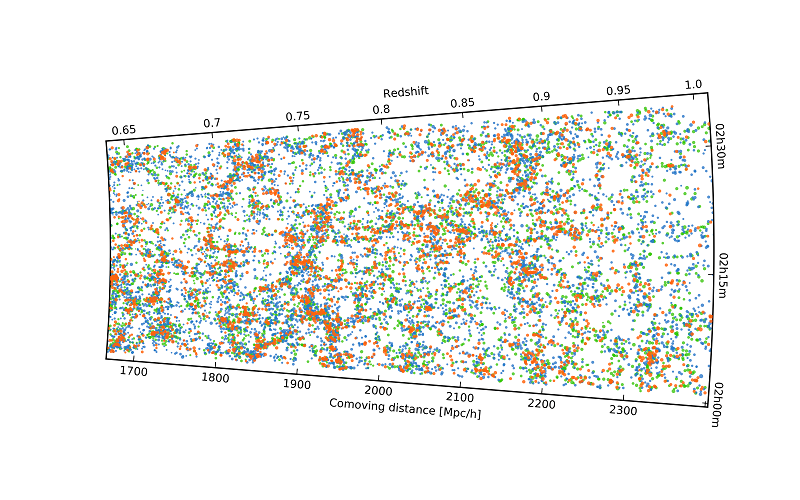 Large-scale distribution of galaxies in a sub-volume of the recently completed VIPERS survey of the distant Universe.  Each point corresponds to a galaxy, with its colour reflecting the age of its stellar population (blue = young; red = old).  Note the frothy structure of the distribution, with filaments and void regions. The bottom scale gives the distance from us in millions of parsecs; one parsec corresponds to 3.28 light years, thus the centre of this sample, at 2000 Mpc, corresponds to about 6 billion light years from us.