North Yorkshire fracking proposals were given the go-ahead by the county council yesterday evening, in the face of fierce opposition…

The County Council planning committee has given the go-ahead for North Yorkshire fracking proposals put forward by Third Energy, with a vote of seven to four.

The planning committee sat for two days and heard more than 100 speakers on the application to hydraulically fracture the KM8 well near the village of Kirby Misperton in Ryedale. The decision to approve the application was announced just after 19:00 on Monday evening.

In a press release, the council emphasised that this was “a single decision on a single site in North Yorkshire”, but also pointed out that local authorities are “required to work within the national policy framework that indigenous oil and gas remain key to energy security while facilitating the reduction of greenhouse gas emissions”.

No intention of jeopardising ‘beautiful county’

Economic growth and development to secure jobs and sustainable communities were also cited as factors in the decision, which signifies the first time a hydraulic fracturing operation has been approved in England since a temporary moratorium on the practice was lifted in 2012.

“This has been a very difficult decision for the Council to make and we know it is a difficult decision for the people of this county,” said Richard Flinton, North Yorkshire’s chief executive. “We are proud of our beautiful county which attracts so many visitors and maintains a thriving tourism industry. We have no intention of jeopardising those qualities and our rural industries and livelihoods.

“For that reason the planning conditions must be fully discharged and monitored. In this case there has already been drilling for gas on this site over many years. The decision taken today does not have a bearing on future decisions. Each application of this nature will be decided upon based on its own merits.”

The council highlighted that it “did not choose to be the first authority to make a decision on fracking within this policy framework”.

An inquiry is currently under way into the decision by Lancashire County Council last year to reject an application by Cuadrilla to explore for shale gas at two sites in the north west of England. Central government will now take responsibility for the final decision on the appeal.

The Department of Energy and Climate Change welcomed the decision.

“This decision has been made by the local council. We’re very clear that fracking is a fantastic opportunity,” Energy Secretary Andrea Leadsom was quoted as saying on the DECC Twitter account. “It’s good for jobs, the economy and strengthens our energy security.”

A huge responsibility for Third Energy

Third Energy said that the approval for KM8 is not seen by them as a victory, but as a huge responsibility.

“We will have to deliver on our commitment, made to the committee and to the people of Ryedale, to undertake this operation safely and without impacting on the local environment,” said Rasik Valand, the company’s chief executive.

North Yorkshire County Council acknowledged the highly controversial nature of the proposal and its approval, reflected in the many objections expressed about significant and adverse impacts on climate change and the environment.

The battle but not the war?

Environmental campaigners reacted angrily, with hundreds of protesters present outside the meeting in Northallerton on Friday and on Monday. In her evidence to the committee, planning officer Vicky Perkin said that of 4,420 individual representations received in relation to Third Energy’s application, just 36 were in support.

“This is an absolute travesty of a decision but the battle is very far from over,” said Simon Bowens, Yorkshire and Humber campaigner for Friends of the Earth.

“Today 7 out of 11 North Yorkshire county councillors voted to approve this fracking application in Ryedale, ignoring the objection of Ryedale District Council itself, as well as thousands of local residents and businesses. Despite this decision, public support for fracking is plummeting as Wales, Scotland and countries across Europe have suspended it. The risks to people’s health and the environment are unacceptable and we will fight on.”

Other companies with an interest in onshore oil and gas will no doubt be following the process closely.

“This approval is a significant one for the nascent shale gas industry,” commented Claire Brook, partner at Bond Dickinson said. “It was made in the face of significant public opposition and has been a long time coming – not just for Third Energy who started their planning application process at least 18 months ago, but also for other participants in the industry who are anxious to see some progress being made after significant upfront investment over the last few years.

“The fact that the developer was required to go to such extraordinary lengths in order to secure this planning approval, for what is an existing well, will still be of concern to the wider industry. The industry and its investors will only have so much patience with the regulatory systems we have in place and we do need to get the balance right.

“Whilst an appropriate level of scrutiny is, of course, essential for these applications, it does need to be proportionate to the likely impacts that might be encountered for the particular development.”

The plastic crisis: What’s the big deal with microplastics?

Arctic conservation: Scientists listen to the sounds of the seascape 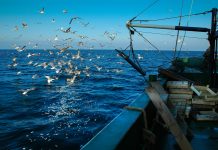 How EU decisions affect fish, the ocean and life on earth