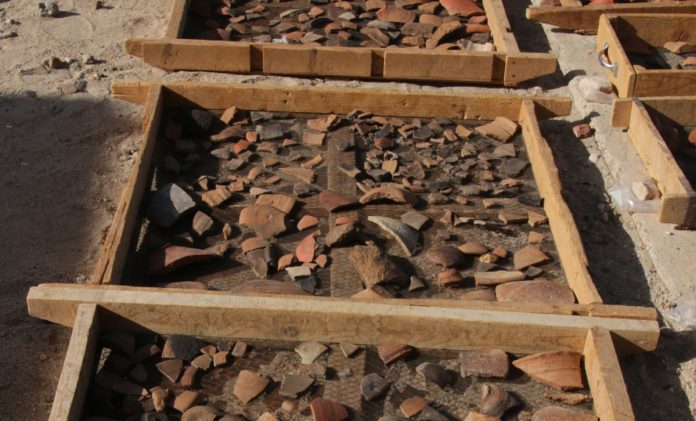 On Sai Island, pottery tells us a lot about life in the New Kingdom in Nubia, writes Julia Budka, Professor of Egyptian Archaeology and Art at LMU Munich

A primary goal of the ERC AcrossBorders project is reconstructing life during the New Kingdom (c. 1539–1077 BC) on Sai Island in Nubia according to the material evidence. For this task, the most numerous finds to be considered on settlement sites like Sai are thousands of potsherds and ceramic vessels attesting to the use, function and occupants of the ancient cities.

The ceramic data from the New Kingdom town is currently being analysed and compared to pottery corpora from the Egyptian towns of Elephantine and South Abydos. In this pottery analysis, a particular focus is laid on similarities and differences between local products and imported pieces, including the significant appearance of hybrid types, e.g. Egyptian types made of Nubian fabrics or with Nubian surface treatment. Our archaeological interpretation and the ceramic typology is supported and extended by petrographic analyses, while neutron activation analysis is used for provenience studies.

These analyses will help to further distinguish within the Nile clays between real imports from Egypt and locally produced, wheel-made vessels. In general, New Kingdom pottery in Nubia is very similar to contemporary material in Egypt. However, the comparative study of material from Sai, Elephantine and South Abydos allows a detailed assessment of both similarities and certain differences.

Sai Island is one of the major find spots for 18th Dynasty pottery in Upper Nubia – material was excavated both in settlement contexts (the New Kingdom town) and tomb contexts (especially pyramid cemetery SAC5). In addition to ready parallels from other Egyptian foundations in Nubia (e.g. Buhen, Askut and Sesebi) and New Kingdom sites in Egypt (e.g. Elephantine and Abydos), there is also a local component and site-specific features of the ceramics from Sai.

The locally produced Egyptian-style Nile clays are almost always wheel-thrown, whereas the indigenous Nubian tradition is hand-made. Especially within the class of cooking pots, the general co-existence of Egyptian (wheel-made) and Nubian (hand-made) pottery traditions is evident. Residue analysis conducted on Nubian and Egyptian cooking pots from Askut has shown that a distinction was made regarding the specific food to be prepared in each pot (see Smith 2003, 113–124). It is also likely that the choice of an Egyptian or Nubian cooking pot was dependent on the identity of the pot’s user, although proof is almost impossible to achieve. At Sai, it is intriguing that both authentic (imported) Egyptian wheel-made cooking pots and examples thrown on the wheel locally are used side by side with hand-made Nubian cooking pots. The imported cooking pots allowed the occupants of Sai to cook in Egyptian-style at their “home-away-from-home”. To cover further demand, these authentic Egyptian vessels were also locally produced on the wheel.

Little is known about the ceramic industry on Sai, though the finished products and their technological features testify that Egyptian potters skilled in wheel production were certainly present at the town. To date, no New Kingdom kilns or pottery workshops have been identified with certainty. Furthermore, hybrid types attest to a regional style, despite a general similarity with contemporary pottery in Egypt. Sometimes, locally produced Nile clay pottery vessels have been modelled on Egyptian types, but with ‘Nubian’ influences concerning the surface treatment, production technique or decoration. The appearance of such hybrid types is very significant, but not straightforward to explain. Such pots might be products of a local fashion and local potters, but could also refer to the cultural identity of their users or be the results of more complicated processes. All in all, they seem to attest to a complex mixture of lifestyles in New Kingdom Sai.

Similar trends are also seen at other Egyptian sites in Nubia, where seemingly Nubian traditions – mostly expressed by surface treatment and decoration – are also traceable. Egyptian Marl clay vessels with incised decoration and a new type of Egyptian cooking pots illustrate that Nubian decoration patterns and shapes directly influenced the Egyptian pottery tradition of the 2nd millennium BC. The transfer of technology and knowledge between Egyptian and Nubian ceramic industries was clearly not unilateral; both traditions adapted specific aspects, illustrating the complex entanglement of Egyptian and Nubian cultures.

In conclusion, the present analysis of pottery from New Kingdom Sai in conjunction with processing of material from Elephantine and Abydos proposes some tentative new thoughts about the occupants of Sai. From the earliest strata onwards, Nubian ceramics appear side by side with imported Egyptian wares and locally wheel-made products. Since the Nubian pots are the minority, it seems safe to assume that the Egyptian style town was initially occupied by Egyptians. However, the production of hybrid pottery types illustrates that Egyptians and Nubians lived and worked side by side, combining aspects of both cultures. Although it comes as no surprise that Egyptian representation is dominant within a colonial site like Sai, a local substratum is traceable as well. The pottery attests to individuals who identified themselves primarily as Egyptian officials and occupants of an Egyptian site, but may nevertheless have had family ties in Nubia and derive from a local group whose specific cultural identity was never completely abandoned.