The development of safe cells is of outmost importance for a breakthrough of the electri­fication of transport and for stationary storage, because the thermal runaway can cause an ignition or even explosion of the cell with simultaneous release of toxic gases. In the last nine years, we have established battery calorimetry at the IAM-AWP Calorimeter Center as a power­ful and versatile electro­chemical-thermal characterization tech­nique, which allows both advancements for the thermal management and the safety of batteries. This center operates Europe’s largest battery calorimeter laboratory and provides six Accelerating Rate Calorimeters (ARCs) of different sizes – from coin to large pouch or prismatic automotive format – which allow the evaluation of thermodynamic, thermal and safety data for Lithium-ion cells on material, cell and pack level under quasiadiabatic and isoperibolic environments for both normal and abuse conditions (thermal, electrical, mechanical).

For ageing studies, the cell is inserted into the calorimeter chamber, which has heaters and thermocouples located in lid, bottom and sidewalls. These adjust either isoperibolic or quasi-adiabatic ambient conditions. Isoperibolic means, that the temperature of the calorimeter chamber is kept constant and the temperature change at the surface of the cell is measured. In the quasiadiabatic mode the heaters in the calorimeter chamber follow immediately any change of the cell temperature preventing the heat transfer to the chamber. Using these two conditions, an ageing study was carried out. First, fresh cylindrical 18650 cells were stored at different temperatures in temperature chambers and then characterized at fixed time intervals in order to investigate the influence of this storage (calendar ageing) on cell performance. Secondly, cells were aged at a constant charging/ discharging rate in temperature chambers (cyclic aging) at room temperature. Figure 1 compares the temperature curves measured in the ARC between the cells in new condition and after cyclic (G1) or calendaric (G2, G3) ageing under isoperibolic conditions (Figure 1a)) or adiabatic conditions (Figure 1b)). Under both conditions, cyclic ageing leads to the largest changes, which manifests under isoperibolic conditions as an increase in the maximum temperature by 4 °C and under adiabatic conditions by reaching the maximum permitted operating temperature of 60 °C earlier. Calendar ageing also leads to the same effects, however, regardless of the storage temperature, the increase in the maximum temperature is only 1.5 ° C. In addition, cyclic ageing also changes the curve shape, which is a further indicator for the ageing status or history. Thus recording of the temperature profile can be used as a “fingerprint” for the state-of-health (SOH) and as fast and reliable method for the characterization of ageing processes. Moreover, the influence of ageing and operating conditions on cell safety can be addressed in the ARCs. This means that the change in the hazard potential of the cells with increasing degree of ageing can be quantitatively determined. 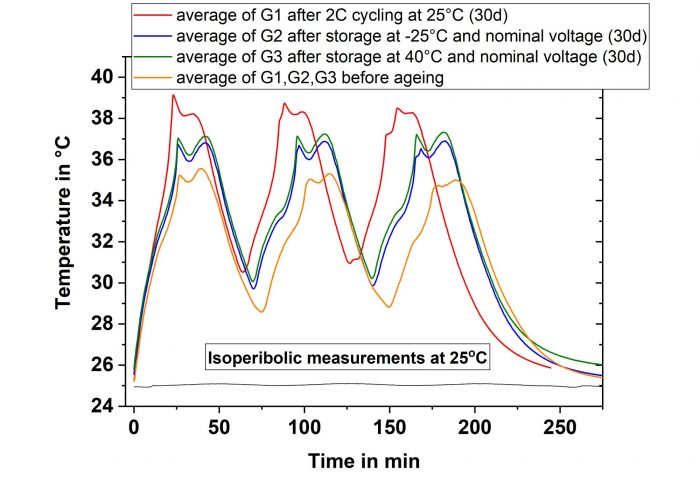 To summarize, battery calorimetry is now well established and is increasingly becoming more requested by our European research partners from both industry and academia, because quantitative and system relevant data for temperature, heat and pressure development of materials and cells are provided as a fast feedback for the cell developers and as input data for modeling and simulation. There are still numerous challenges to address and we hope that our Calorimeter Center will help the European industry to make further progress in the battery field, which is urgently needed to reach a low-carbon future, to foster European leadership, and to create new jobs, which are the main objectives of the European Battery Alliance.

Leader of the Group Batteries – Calorimetry and Safety