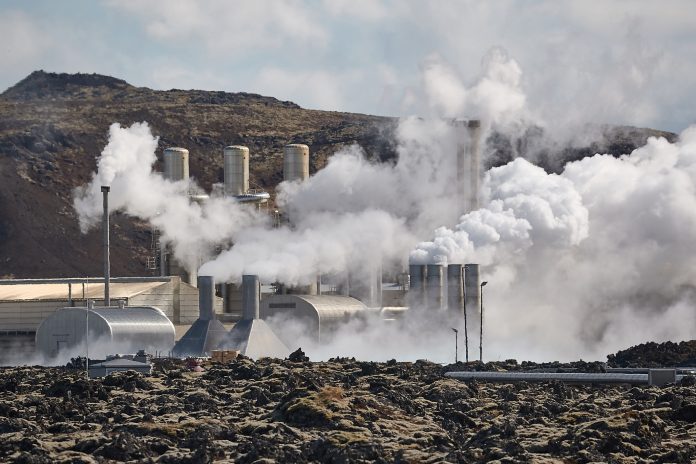 Iceland is a volcanic island straddling the Mid-Atlantic-Ridge, a mid-ocean ridge where two major tectonic plates pull apart from each other. It is also sitting directly over a mantle plume – a localised upwelling of hot magma from the mantle. This unique geological setting makes the island particularly volcanically active with a large number of active volcanoes. This combination is also what makes Iceland the largest volcano island in the world with over 30 active volcano systems. In just the last 4 years there have been three volcano eruptions in three different volcano systems and one of these eruptions (Bardarbunga system) is still ongoing at the time of writing. Icelandic volcanoes have accounted for a third of the total global lava output in the last half millennia.

Geothermal activity is a phenomenon that is closely associated with active volcanoes. An active volcano means that there is a heat source in the form of a magma chamber or magma intrusions at a depth of typically few kilometres under the surface. A heat source alone is not a sufficient condition for geothermal activity. You also need water, and to have a sufficient amount of water to set up a hydrothermal convective system, the rocks have to be permeable enough to allow meteorological water (or seawater) to penetrate it and move around. The area around many volcanoes in Iceland meets all these conditions because the rocks are very permeable due to tectonic and volcanic rifting. There are plenty of fissures allowing water to seep deep down to be heated by the heat source.

Once enough water is trapped in the permeable rocks above the heat source, capped by impermeable cap rock at the surface, heat transfer by convection instead of conduction will be possible. Hot water deep down moves up toward the surface where it cools and sinks to be heated again. This system of hot rocks and trapped hot water in convection is called a geothermal system, and the collection of hot water with a lot of dissolved solids, the geothermal fluid, is the geothermal reservoir. The surface area above the system is generally called a geothermal field and usually exhibits visible signs of the activity taking under the surface, e.g., hot springs, geysers, and fumaroles.

There are many systems in Iceland and four high-temperature systems are currently being exploited for the production of both electricity and hot water. Two of these areas are situated on the Reykjanes peninsula where the Mid-Atlantic-Ridge is uplifted above sea level. The geothermal fluid in these systems is very saline as it is mostly seawater that recharges these reservoirs, and the fluid is hence called geothermal brine.

The utilisation of geothermal systems

The most obvious and common way of utilising a geothermal system is to drill a deep enough well into the hydrothermal system in order to bring the extremely hot geothermal fluid to the surface. A typical well or borehole in high-temperature geothermal fields in Iceland is somewhat over 2km deep, and up to 3km deep in some areas. The temperature of the fluid brought up from such conventional boreholes can be up to 360°C.

As the geothermal fluid is brought to the surface its pressure drops accompanied with a lowering of the boiling point of the fluid. At the top of the well, it is most commonly a two-phase mixture of water and steam. It is necessary to separate the two phases in order to get high-quality steam for electrical generation. This is done in special separator stations which are usually the first part of a geothermal power plant. Once the steam has been separated from the fluid it can be passed through turbines to produce electricity, and the still very hot pressurised separated water can be put through heat exchangers to heat up cold water for district heating and domestic use. Such combined heat and power plants are the most common type of geothermal power plants in Iceland.

Geothermal power plants can be quite complex and the utilisation of geothermal power is not without problems. Unlike conventional oil or gas-fired power plants where the working fluid is simply clean water, the working fluid of geothermal power plants is geothermal fluid which has a complex chemical composition varying from area to area. The fluid is basically water containing a lot of dissolved minerals and dissolved gases. Complex processes and reactions take place as the fluid depressurises (and boils) on its way up the wells and also in the separation stations as the fluid as allowed to flash, i.e., to boil at high temperatures and pressure to produce more steam.

Boiling of the fluid releases dissolved gases which in turn will drive the pH level of the fluid up making it more alkaline. This typically leads to the formation of metal sulphides and calcites that can form very hard scales on the insides of good casings and also on the inside of surface pipes.

The mineral with the highest concentration in geothermal water in Iceland is silica or silicon dioxide. Typical silica concentrations in geothermal fluids in Iceland are between 0,6 and 1,2 grams per litre. The hot fluid dissolves both amorphous (opals) and crystalline (quartz) forms of the rock mineral at great depths and pressures, and at the high temperatures, the silica exists in its water dissolved state as silicic acid.

Silica while in the form of silicic acid can form hard glassy scales and also combine with various metals to form various silicates that can also cause scaling. There exist various methods to control silica scaling so it doesn’t cause too many problems for heat exchangers and surface piping in geothermal power plants. This usually involves keeping the water from becoming oversaturated with respect to amorphous silica by carefully controlling the temperature and the pressure of the water. Once the water becomes oversaturated with respect to amorphous silica as it cools further, silica scaling occurs rapidly and in large quantities. This type of scaling is especially problematic for injection wells.

The disposal of wastewater and the sustainability of geothermal power

The mentioning of injection wells brings up the pivotal question of what happens to geothermal wastewater and how sustainable the geothermal resource really is. Geothermal wastewater is a mixture of the separated geothermal fluid and the condensed steam after it has been used to produce electricity. Natural recharge rate of geothermal reservoirs varies between areas and is in most places less than the outflow of geothermal fluid due to utilisation. If the geothermal resource is to be sustainable, great care must be taken to not overexploit the system. This will lead to a pressure drop in the system and reduced flow from wells resulting in less and less power production capacity.

In order to avoid this, the water taken out of the system must be returned back into the system. This is accomplished by drilling deep injection wells and injecting the wastewater back down into the reservoir. This is the preferred method of geothermal waste water disposal but silica scaling can make reinjection problematic and costly to the point of risking overexploitation. This is one of the biggest and costliest problems associated with geothermal utilisation in Iceland.

A look at the problem from a new perspective

The amount of silica that precipitates out of geothermal wastewater in Iceland amounts to over 40,000 tonnes annually and if extracted and purified it could be sold for between 1 and 20 USD per kg, depending on its purity and surface area. When used in healthcare products and supplements the price per kilogram can go over 1000 USD.

GeoSilica Iceland is an Icelandic start-up company that is already producing high value precipitated silica from geothermal wastewater for use as a silicon food supplement in the form of colloidal silica. The product is expected on the market late next month. The company is actively researching ways to efficiently extract and purify precipitated silica from geothermal wastewater on a large scale. Preliminary feasibility studies indicate that this is definitely a possibility, at least for some geothermal areas in Iceland.

The greatest challenge is to be able to control the particle size distribution of the final silica sols and tailor it to specific applications.

There are other valuable minerals besides silica in a geothermal fluid. An example is lithium. As boreholes get deeper, it is expected that the concentrations of such metals, and even precious ones such as gold, will increase substantially. Extraction of such metals from the fluid has to be done downstream of silica extraction. Drilling extremely deep wells in order to reach 400-600°C hot supercritical hydrous fluid is the objective of the Icelandic Deep Drilling Project (IDDP). The main benefit of such deep wells is that a single borehole can provide up to 10 times more power than a conventional borehole. A secondary objective of this project is the extraction of valuable metals from the extremely mineral-rich fluids from such deep wells.

When this becomes a reality, GeoSilica Iceland wants to be ready with the know-how and technology required to extract silica from the geothermal fluid produced by such wells, in order to make the extraction of metals easier.

In summary: The large scale extraction of silica from geothermal wastewater would make it easier to re-inject it back into the geothermal reservoirs, thus improving the sustainability and the utilisation of the resource, while at the same time, enabling the extraction of other precious metals.

GeoSilica is currently looking for funding in order to scale up its production capacity and bring its products to European and other international markets. GeoSilica strives to be a socially responsible company and intends to improve the society by conducting towards a healthier environment, creates new jobs, maximising the utilisation of the geothermal resource in Iceland and contribute to EU sustainable objectives.