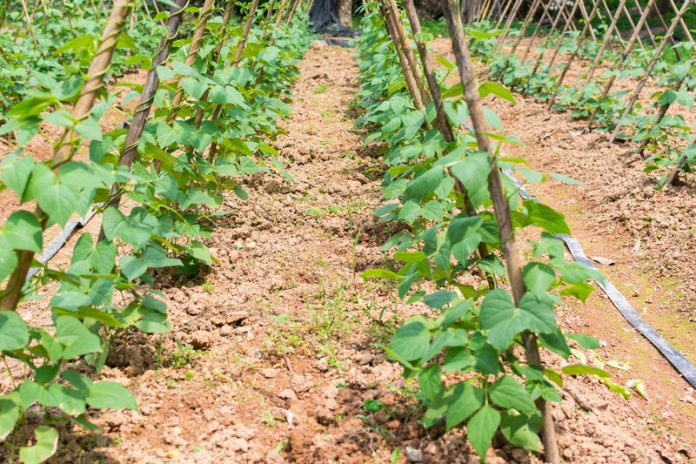 A complex disease known as root and crown rot (RCR) has become a yield- limiting disease of common beans ( Phaseolus vulgaris L.), reaching epidemic proportions across Zambia and Mozambique and ravishing subsistence fields of poor farmers who depend on beans for their livelihood. The problem starts when plants emerge and grow enough to develop leaves and necrosis is noticed on lower parts of the stems or wilting of the young plants preventing the absorption of water and nutrients. Climate change along with limited genetic diversity of a mixture of susceptible local varieties are playing a big role in its spread across both countries. In addition to the common insect and foliar diseases that can also plague beans and limit yields, another negative factor is RCR which affects the entire bean plant.

Beans are a major source of protein, micro- and micronutrients in Zambia and Mozambique, therefore local governments and non-governmental agencies advocate the planting of beans more than other legumes to combat hunger and malnutrition in this part of Africa. Over time, research publications have claimed that many unrelated fungi are the primary causal agents. However after many studies and published articles knowledge of the causal agent is still fragmented and incomplete enough to prevent achieving milestones in breeding for root rot resistance in regions where common beans are an important staple crop.

At the University of Nebraska-Lincoln in the USA, a research team led by an experienced plant pathologist, Dr. J.R. Steadman, joined by a bean breeder Dr. Carlos Urrea and Dr. Dr. G. Godoy-Lutz (a visiting scientist from the Dominican Republic) teamed up with colleagues from Zambia and Mozambique to examine this old problem using DNA genomic tools. The project entitled: Genetic Approaches to Reducing Fungal and Oomycete Soilborne Problems of Common Beans in Eastern and Southern Africa was funded by a grant from the National Institute of Food and Agriculture of United States Department of Agriculture (USDA).

Three years of sampling hundreds of diseased plants in experimental and farmers’ fields, produced infected tissue that were analyzed at the healthy- disease interface. Traditional in vitro culturing, as well as innovative metagenomics technologies, produced fungal cultures and an abundance of DNA sequence reads that identified fungal members of the Nectriaceae family, which is mainly populated by species of Fusarium such as F.oxysporum, F.solani and F.equiseti, the main species found associated to RCR in the study. Even though F. oxysporum and F.solani have been implicated as root and flower pathogens in many crops, their role as primary pathogens of bean was not evident prior to this study. F.equiseti has been reported to be a pathogen of cereals but not legumes. F. oxysporum has been the predominant species found in Zambia whereas F.solani was the primary pathogen in Mozambique. However, they are not found alone but co-occur with F. equiseti and other Fusarium species, which raises the question if, in nature, species of the same genus influence the success of one or more related pathogens.

Species of Fusarium make an interesting and complex fungal group, ubiquitous in soil, air and aquatic environments, versatile in their mode of reproduction and survival and causing diseases in human, animals and plants. Some species of Fusarium are capable of producing toxins which increase in their pathogenicity on man, animal and plant hosts.

Training young scientists in plant pathology and breeding is also an important component of this project that will improve human resources available in the host countries where trained professionals are often lacking. M.S. graduate students Chikote Mukuma and Suzana Fernandes, from Zambia and Mozambique respectively, have devoted time and energy to examine large sections of microbial genomes inhabiting the infected bean tissue as well as healthy plants. They also inoculated in vivo isolates from diseased plants and replicated the symptoms on bean plants under controlled conditions to prove pathogenicity of the isolates. The graduate students also evaluated and used new technologies to extract, ship and preserve DNA from plants or fungi without resorting to expensive equipment and a constant sources of energy that may be lacking in developing countries.

They have also found similarities regarding the role the collective species of Fusarium that challenges other hypothesis that confer an important role to oomycetes or basidiomycetes as the causal agents of RCR in neighboring African countries. The other fungal species tied to RCR have been absent or barely present or only present in the same plant with the Fusarium species highlighted in this study.

For the bean breeder Dr. Urrea, knowing the primary pathogen involved in pathogenesis of RCR is necessary key information to allow his breeding program to screen for RCR resistance and find a molecular marker that will decrease the time to find RCR resistant lines that are adapted to Zambia and Mozambique. Development and deployment of resistant beans is regarded as the most sustainable and effective long term strategy to offset the effects of climate change in parts of the world where resources are scarce and the economy relies mainly on agriculture.

With the collaboration of the project’s African PI’s Dr. Celestina Joshua (Mozambique) and Mr. Kennedy Muimui (Zambia), over 500 diverse bean lines were tested in field nurseries over 3 years. There were at least 12 lines that were selected with no or low foliar diseases, good seed yield and no RCR symptoms where other lines were decimated by RCR. These African Collaborators have shared the project’s outputs including improved bean lines with government and farmers’ associations often composed of women and demonstrated the existence and seriousness of RCR and the need to replaced local susceptible varieties for improved and productive bean lines resistant to RCR. Moreover, when the students return with their degree and a wealth of knowledge and experience in plant pathology, plant breeding among other subjects, they will be able to use their abilities to develop and assist research programs and attract and collaborate with new international projects to improve and develop agriculture in each country.