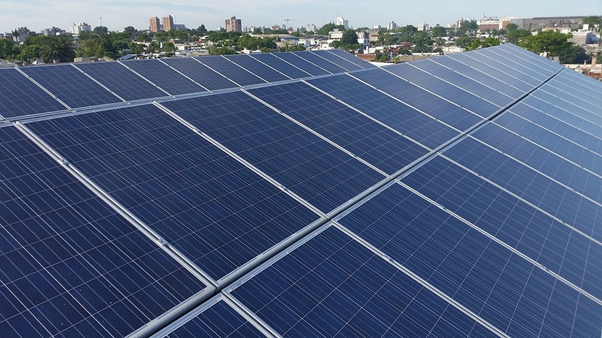 Ben Robinson, Business Development Manager at BayWa r.e. Solar Systems shares his thoughts on the return on investment you can expect to see when installing a solar PV system…

According to The Telegraph, more than 300 British households are installing solar PV modules onto the roof of their house every week. The question is: should you be joining them? Here’s a rundown of what you can expect your return on investment to be if you install solar panels on your property.

How much do solar panels cost to install?

The first thing you need to keep in mind when working out whether or not solar PV is worth it to you is its cost: both upfront and in maintenance during its lifespan.

Firstly, the upfront cost. The typical household will require a 4kWp, 28m2 solar panel system to meet their electricity needs— this will cost you approximately £4,500–£7,000, including installation.

This is a substantial amount of money for a home improvement and many people may be tempted to get their solar panels through a ‘rent-a-roof’ company. These companies will install a solar system on your roof free of charge in exchange for the full 20 years’ worth of feed-in tariff payments that they produce. You will then have to sign a Power Purchase Agreement (PPA) with the ‘rent-a-roof’ company for the electricity that is used within the home that is produced by the modules, but as Which? report, you’ll miss out on thousands of pounds over the twenty-year period, and the contract you sign with the rent-a-roof company is often very much in favour of the provider. Because of this, if you have the money you should always buy solar panels yourself.

After their initial installation, solar panels incur very few maintenance costs due to the fact that they have almost no moving parts. The expected lifespan of a solar PV can be more than 40 years, and it is very rare that it will require any maintenance during this period.  It is likely that the inverter will need replacing after 10 years and by that time, no doubt that they will be significantly cheaper to purchase.

All you will need to do is ensure that the solar modules are not damaged, do not become soiled or shaded by trees etc. and that the inverter is still functioning.

How much money can you make through your solar panels?

Solar panels can save you substantial amounts on your energy bills every year. This is because you will not only save money by generating your own energy rather than having to buy it through a provider, but you will also be paid 4.25p by the government for every kWh you produce through the feed-in tariff. In the right situation a 4kWp system will generate a minimum of 3,400kWh per annum, which means that you’ll be paid at least £144.50 by the government every year, tax free for the ‘generation’.

You will also be paid 4.91p for 50% of what you generate which is assumed to be exported to the National Grid – therefore an additional revenue of £83.47 (3400/2 x 4.91p). According to UK Power, the average medium-sized household uses approximately 3,100kWh a year, so a 4kWp system across the year should provide all a home’s electricity requirement.

According to research from Compare My Solar, the average cost of a kWh from one of the UK’s major energy providers is 16p, which means you’ll also save £496 a year through your energy bill (if you are a medium-sized household, according to UK Power). This means that a 4kWp system would generate a total of £723.97 a year through the FiT and by savings made on energy bills.

The average 4kWp solar PV system costs £6,000 to install, which means that its payback period is approximately eight years. If the energy rates stayed at their current level, you would then make around £720 profit for twelve years, meaning the additional revenue during the life of the feed-in tariff after paying for the system would be approximately £8,640. However, this doesn’t take into account the fact that electricity prices are set to rise significantly in the future — the National Grid claim this could be by double in the next 20 years in their 2015 Future Energy Scenarios report.

Furthermore, this doesn’t take into account that even after the feed-in tariff has ended, your household will still benefit from free electricity for the further thirty years of your PV panel’s expected lifespan. This could rise to almost £1,000 a year if the National Grid predictions are to be believed.

It should also be noted that if you come to sell your house, having a nicely installed solar PV system may be a big draw for potential buyers, especially as electricity prices begin to rise. This could add thousands of pounds to the value of your home.

In conclusion, installing a solar PV system can prove an excellent return on investment over its 50-year lifespan, especially with electricity prices set to significantly rise in the future. As the government lower the feed-in tariff every quarter and the rate you receive over the 20-year period is locked in when you register for it, the sooner you purchase your solar PV modules the better.