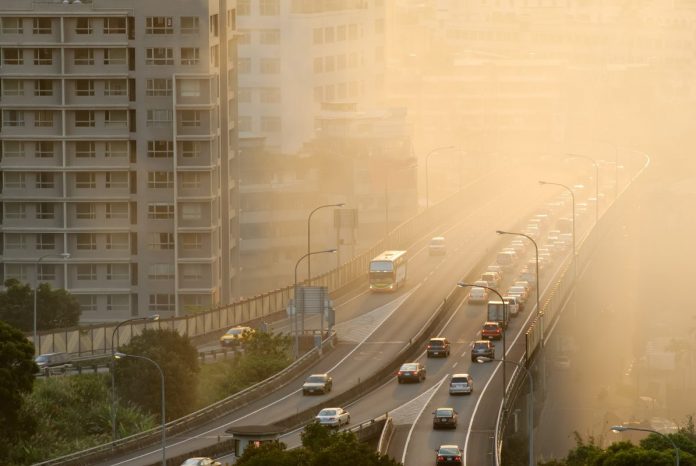 Breathe in and breathe out. Hold your breath. If you do this too long, you can feel a strong urge to gasp and fill your lungs with fresh air. But the air we breathe is often not as fresh as we think it is. Essential for our vital functions, it often contains pollutants that we inhale without realising it. Air pollution is mostly invisible, but it can harm our health and the environment around us greatly.

I remember the debate about air pollution in the 70s and 80s vividly. The forests and lakes in Northern Europe where dying from “acid rain” and stirred heated discussions. Realising that air pollution does not halt at national borders but can affect communities and citizens thousands of kilometres away, the countries in Europe and North America decided to cooperate to solve the problem. In 1979, 32 countries signed the Convention on Long-Range Transboundary Air Pollution under the auspices of the United Nations Economic Commission for Europe (UNECE). Over the last 30 years, additional countries have joined, bringing the number of parties to 51 to date. The number of substances covered by the Convention and its protocols has also been gradually extended, notably to ground-level ozone, persistent organic pollutants, heavy metals and particulate matter.

The result of this collective effort has been spectacular: emissions of a series of harmful substances have been reduced by 40 to 70% since 1990 in Europe 1. In North-America, reductions of 30 to 40% have been registered. The air we breathe today in Europe and North America is much cleaner than it was 30 years ago.

However, despite this success, a lot remains to be done, as evidenced by the regular peaks of pollution registered in big cities like Paris, London or Madrid. The impacts of air pollution on the environment continue to be worrisome. It is still destroying forests and soils, causing fish loss in lakes, and putting entire ecosystems at risks. Air pollution, especially black carbon (or soot) – a component of particulate matter – is also contributing to climate change. The resulting economic impacts often go unnoticed but they are huge: according to an assessment by the European Environment Agency 2, the societal costs of air pollution from Europe’s largest industrial facilities amounted to at least €59bn in 2012, and possibly as much as €189bn.

Recent research has also shed some disturbing light on the negative impact of air pollution on human health. In 2012, around 7 million people in the world died prematurely as a result of air pollution exposure, according to the World Health Organization (WHO) 3. Some 600,000 alone in the European region. This makes it more deadly than malaria, tuberculosis and AIDS combined, and by far the world’s largest single environmental health risk. The majority of air pollutant-related deaths occur in developing countries. The Western Pacific and South East Asian regions bear most of the burden with 2.8 and 2.3 million deaths, respectively. According to WHO studies, exposure to fine particulate matter, a major component of air pollution, in the Asian region is highest in countries like Pakistan, Afghanistan, Bangladesh, Mongolia, India, Nepal and China. In addition to causing respiratory and heart diseases, exposure to air pollution can also lead to cancer, as evidenced by the International Agency for Research on Cancer in 2013 4. It found that in 2010, some 223,000 deaths from lung cancer worldwide were attributable to air pollution.

We must therefore strengthen our joint efforts – across national boundaries, but also across sectors – in our action for cleaner air. Tackling air pollution is a key priority in the pan-European region. This is why air quality will be one of the 2 main themes at the Environment for Europe ministerial conference in 2016. If governments renew their firm commitment to implement the legally binding emission reduction targets, and set further targets, they will send a strong message to the world and help save tens of thousands of lives. Tackling air pollution is also a key priority for the world, from Asia to Latin America, as evidenced by the proposed Sustainable Development Goals. To respond to this challenge, we must share experiences and inspire global action.

The major sources of air pollution are well known: power stations and industrial installations emit sulphur dioxide and heavy metals; traffic is a source of nitrogen oxides; ammonia emissions from agriculture contribute to the formation of particulate matter. Likewise, wood-burning stoves in individual homes, if not equipped with appropriate filters, are also a major source of particulate matter and other pollutants. Countries all over the world will need to take drastic, and sometimes unpopular, measures to significantly curb the emission of air pollutants across all these sectors. This will require the active engagement of all these industries, and also behavioural change by each and every one of us. But we have proven that we can get cleaner air, if we work together.

Breathe in, breathe out and let’s get to work.

Under Secretary-General of the United Nations