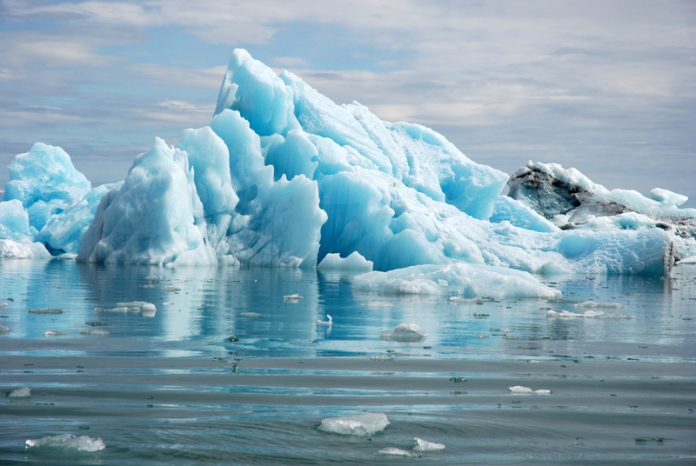 Professor Martin Hoelzle from the Department of Geosciences, University of Fribourg sheds light in the importance of measuring the increased fever of world’s climate…

The cryosphere as a whole system consists of snow, river and lake ice, sea ice, glaciers, ice shelves and ice sheets, and frozen ground. The word cryosphere derives from the old Greek word kryo, which stands for cold. The different components of the cryosphere can be categorised as seasonal and perennial ice, or as ice in the sea, in rivers and lakes, in the ground and on land. Perennial surface-ice on land, one can differentiate between ice sheets, ice shelves, and glaciers. There are fundamental differences in time-scales and processes involved between the different components of the perennial surface-ice on land. Due to the large volumes and areas, the two continental ice sheets actively influence the global climate over time-scales of months to millennia. Glaciers, with their smaller volumes and areas, react much faster to climatic effects (i.e., time-scales range between months and centuries).

Concentrating on earth land surfaces, ice masses are covering today about 10% with glaciers and continental ice sheets and during the ice ages this amount was about a factor of three. The present ice cover corresponds to about 75% of the world’s total freshwater resources. The sea level would rise by almost 65 metres, if all land ice melted away, with the continental ice sheet in Antarctica contributing about 57 metres and Greenland 7 metres, respectively. All other glaciers would roughly contribute half a metre to this rise. Glaciers especially represent a unique resource of fresh water for agricultural, industrial and domestic use. They are also an important economic component of tourism and hydro-power production, a major component of the culture, landscape, and environment in high-mountain and Polar Regions and sometimes they create situations with serious risks of natural hazards. They also constitute a key variable within climate-related observation programmes, because they are close to the melting point and react strongly to climate change, therefore they provide some of the clearest evidence of climate change and are one of the most important terrestrial Essential Climate Variables (ECVs) defined by the Global Climate Observing System (GCOS). Internationally coordinated glacier monitoring has been initiated already in 1894 when climate change was not at all on the international climate agenda. However, thanks to the foresight of the founders of the international glacier observations like, F.A. Forel, today unprecedented datasets on the distribution and changes of glaciers are available. These data derived from in-situ measurements and remote sensing, which are a fundamental basis for many scientific studies which constitute the present state of knowledge. Usually, scientific articles report on the methods and main results of glacier investigations. The raw data and meta-information are compiled, and published in standardised formats and made available in printed and digital form by the Global Terrestrial Network for Glaciers (GTN-G) represented through the World Glacier Monitoring Service (WGMS) and its cooperation partners, the US National Snow and Ice Data Center (NSIDC), and the Global Land Ice Measurements from Space (GLIMS) initiative. This year is the 30th anniversary of WGMS, which was founded in 1986 by merging the 2 former services of the Permanent Service on the Fluctuations of Glaciers (PSFG) and the Temporary Technical Secretariat for the World Glacier Inventory (TTS/WGI). The extended dataset consists of information about ongoing glacier fluctuations, such as changes in glacier length, area, volume, and mass and on the distribution of glacier area on all continents called glacier inventories. All glacier observations are submitted through an international scientific collaboration network in over 35 countries worldwide, represented by so-called National Correspondents and Principal Investigators of WGMS. The data sent to the GTN-G are converted into standardised formats and uploaded into different databases, which can be accessed by a web browser hyperlink-http://www.gtn-g.ch/data_browser/ – ‘web browser’). Each new version of the databases gets a digital object identifier and are made available to the public free of charge. These glacier databases are today an important basis for different assessment reports such as the well-known Intergovernmental Panel on Climate Change (IPCC) and also often used in many scientific publications.

In 2014, a near-time reporting was introduced for the official ‘reference’ glaciers (with more than 30 years of continued mass balance observations), in agreement with the responsible Principal Investigators. This allows the WGMS to report preliminary mass balance data as soon as a few months after the end of the corresponding observation period. The new Global Glacier Change Bulletin series (http://wgms.ch/ggcb/) aims to provide an integrative assessment of global glacier changes every 2 years. The main focus is on mass balance and length change measurements. More than 5,500 glaciological mass balance observations from 413 glaciers and 42,000 length change observations from around 2,000 glaciers have been collected and made available by the WGMS. At the end of 2015, during the COP21 in Paris, the WGMS Glacier App was launched for mobile devices in order to increase the visibility of global glacier changes, its observers, and the internationally coordinated glacier monitoring network. The WGMS Glacier App is available at no cost from Apple App Store and Google Play Store. We recommend everybody to explore theses rich databases and learn more about glaciers, one of the most unique climate indicators. 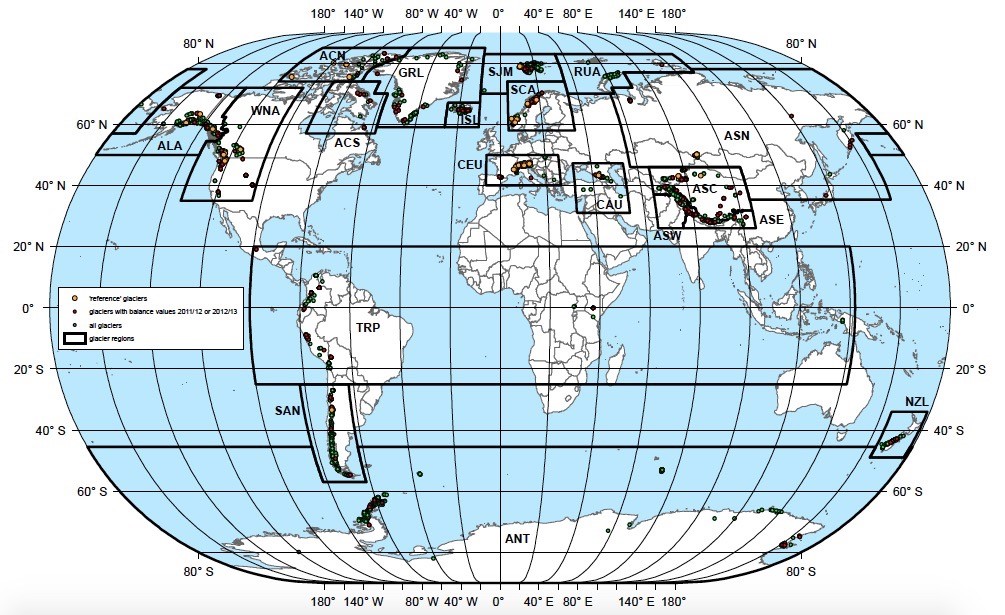 Figure: Location of the 3735 glaciers for which data is available from the WGMS. This overview includes 151 glaciers with reported mass balance data for the observation periods 2011/12 and 2012/13, and 40 ‘reference‘ glaciers with well documented and independently calibrated, long-term mass balance programme based on the glaciological method (source WGMS 2015).

Department of Geography, University of Zurich