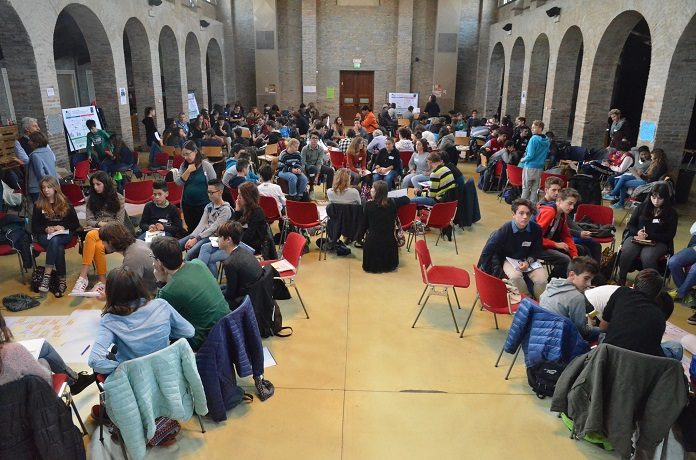 This participatory process was set up in secondary schools, within five areas in Italy with different socio-economic and environmental pressures: Ravenna and Ferrara, which are small towns with significant industrial and agricultural activities; the Lower Arno Valley (San Miniato), an area with small tanneries and agriculture; Naples, a metropolis affected by waste management problems, air pollution and high noise levels; Taranto, a large town that which is home to the largest steel industry in Europe.

The protagonists consisted of 800 young people aged between 11 and 17, who were involved in air quality and noise monitoring, inside and outside of the schools. These school goers observed how the instruments worked, discussed the hazards and risks with experts, and assessed their own perception of risks through a questionnaire. Finally, they compared their risk perception with the monitoring results and then reflected on how to live in a healthier, cleaner environment.

The local administrators in the areas were informed and engaged with the young citizens and listened to their recommendations. The dialogue was a success: the chance to discuss the official and reliable data, collected by the local agencies for the environment (ARPA), and to listen to the fresh voices of the youngsters was highly effective in promoting scientific citizenship.

GIOCONDA focused on air pollution and noise since the negative influence on health of these factors has been established and they are both recognised as modifiable environmental factors by the WHO. According to the EU Noise Directive, schools are “sensitive receptors” and should be located in quiet areas.

Noise is one of the risk factors influencing mental, behavioural and neurological disorders. Cognitive impairment in school-age children represents a serious health issue, with language skills, reading comprehension, memory and attention being particularly affected; teachers can suffer from stress or voice problems due to the noise coming from outside or inside the classrooms.

The results of the atmospheric particulate monitoring carried out by GIOCONDA, inside and outside of the school buildings (aggregated into annual and seasonal means), were under the limits set by Italian legislation. Nevertheless, the results were generally above the thresholds for health-harmful pollution levels proposed by the “WHO Air quality guidelines”.

As for noise measurements, a global indicator was identified for an overall evaluation of the noise situation in each of the monitored classrooms (Global Noise Score). The results were very poor in the eight schools monitored: around 75% of the classrooms were in the lower levels of the ranking, i.e. “very poor” or “poor”, mainly due to structural problems of the school buildings.

The perception of risk related to the air quality was consistent with the levels of pollution monitored, particularly in schools close to congested streets or located in city centres students’, perception of risk was higher than in the other locations investigated. In industrial areas the risk was perceived as high, almost only attributed to the nearby industries and to a lesser extent to vehicle emissions, which are actually a major cause of pollution.

A significant gap between risk perception and noise monitoring was observed. The answer to questions relating to “declared knowledge on risks related to noise” and “concerns about your health” showed scarce awareness.

The novelty of GIOCONDA was to demonstrate the efficiency and efficacy of including these findings in a participatory process, where pupils formulated their recommendations to the local policy makers based on evidence. The recommendations were presented in public events in order to help decision makers to develop evidence-informed policies to promote measures to prevent or reduce environmental health risks. The local administrators were able to respond and give their feedback live.

The key words were:

Data – The need to make the data on air and noise pollution not just transparent but also well communicated to citizens emerged as a priority in all the GIOCONDA schools. “Don’t hide data on the environment and health” was a key phrase resulting from the consultations.

Mobility – Practical actions were proposed to administrators, such as improving local public transport and bike lanes linking city centres to the outskirts. This was also a field where young citizens felt committed to real change, as they were willing to modify their habits and encourage their families to do the same. In Ravenna and in Ferrara, the school goers’ recommendations were formally included in the Urban Mobility Plans. In Naples, school goers asked for “a city, not just clean from waste, but also from polluting and noisy traffic”.

Participation – In terms of how to prevent air and noise pollution, beside raising topics such as sustainable transport, energy production, the introduction of new technologies to mitigate the effects of polluting industries, or the need to consume less, there was a clear and repeated need to “unite people to save the environment”. Based on reliable and well communicated data, people need to be encouraged to regularly meet with their administrators, which is one way of improving the success scientific citizenship. In San Miniato, as well as in Taranto, the request for a Young People’s Town Council was proposed and taken into consideration by the decision makers.

The participatory process revealed the potential of the public engagement in environmental health-related policies and of the direct involvement of children in understanding their own exposure and actively taking the initiative to modify it.

Institute of Clinical Physiology of the Italian National Research Council