Mines and IED’s have become the weapon of choice for any terrorist or insurgent organization worldwide, and over 70 countries currently suffer from the problem, with vehicles regularly being destroyed and people killed and injured.

To counter those threats ABBS and DREHTAINER have agreed to work together to take their respective Active Mine Protection Systems to the global market as a combined system. The two systems working together can provide complete protection against under-belly blast mines within the system specification.

The DREHTAINER Zero Shock®[F1]  system consists of a floating floor inside the vehicle on which the crew seats and any sensitive equipment are located. This secondary floor is held in position at a specified height above the vehicle floor by cables tensioned between the roof and floor. The cables have a link arrangement which is separated explosively as soon as a mine blast is detected, so that the Zero Shock floor then drops downwards under gravity, completely isolating the occupants from the initial shock effects that can cause significant lower limb injuries. The system also provides sufficient clearance from the vehicle floor to ensure that any floor deformation does not contact the platform on which the occupant’s seats are located. 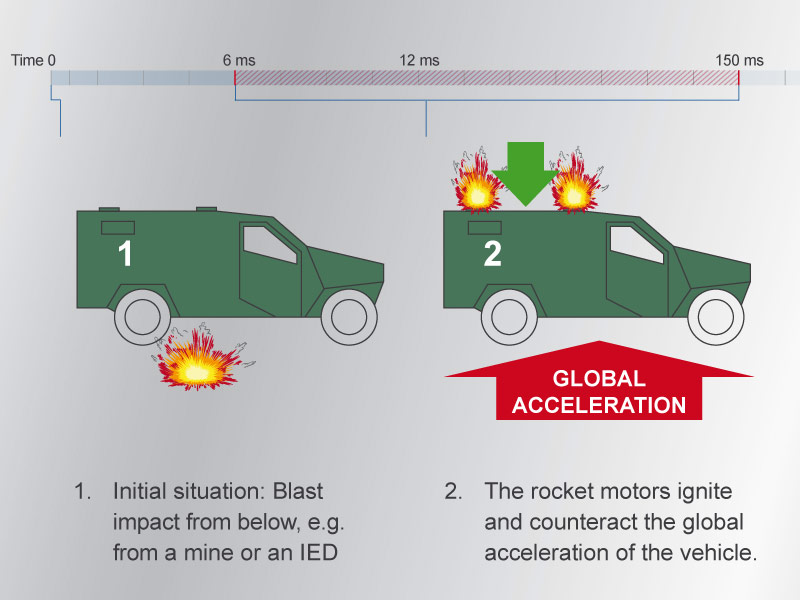 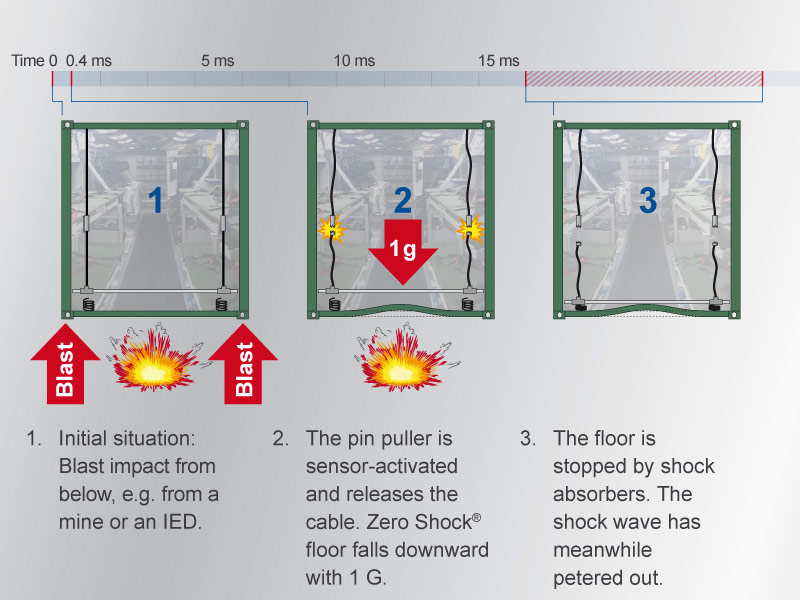 This simple method of isolating the vehicle crew from the mine blast effects works well for the first 5 – 10ms of the event. However, if the vehicle is light or the design mine blast specification is exceeded, the global acceleration of the vehicle can become a problem because of the secondary floor platform being picked up and accelerated by the rising vehicle. This is where the ABBS VGAM (Vehicle Global Acceleration Mitigation) system comes into play, the novel, exceptionally fast-acting, powerful rocket motors developed by ABBS pushing the vehicle down against the mine blast lifting forces and preventing its acceleration upwards. If the mine blast is within the system design specification, the upwards movement of the vehicle will be completely prevented, so the occupants will not be subjected to any significant G forces, and will suffer no significant injuries.

As long as the vehicle belly plate can sustain the blast loads without being penetrated, and the vehicle floor design and the spacing between the floor and the DREHTAINER Zero Shock® floor is sufficient to prevent floor deformation effects becoming a problem, there is no theoretical limit to the mine blast specification that can be dealt with by the combined systems. The ABBS rocket motors are so small and powerful that sufficient can be used to deliver very high impulse levels to the vehicle within the 20 – 30ms that most mine blasts are producing their lifting forces.

It is therefore now possible for armoured vehicle OEM’s and the military vehicle specifiers to consider multiplying their vehicle mine blast specifications by a factor of 2, 3 or even 4 without adding huge amounts of weight to keep the global acceleration threat within limits. The ABBS rocket motors provide ‘artificial weight’ at just the right time, and for the correct duration to counteract the forces generated by the relatively large IED’s that are currently prevalent in many conflict areas around the world. A single VGAM motor will briefly produce 50,000kg thrust, so four on a 10 tonne vehicle will make it weight 210 tonnes for just the right period of time required to fully counteract the mine blast forces.

The DREHTAINER Zero Shock® system has been developed and fully tested by several European OEM’s and is in service with the Swiss Army, and will shortly enter German Army service as well. The ABBS AMPS technology is currently undergoing full system testing and will be available for trial on customer vehicles early in 2015. Both systems can be retrofitted into existing vehicles to upgrade their mine blast capability  and extend their service lives, helping to improve combat effectiveness within current budget levels. 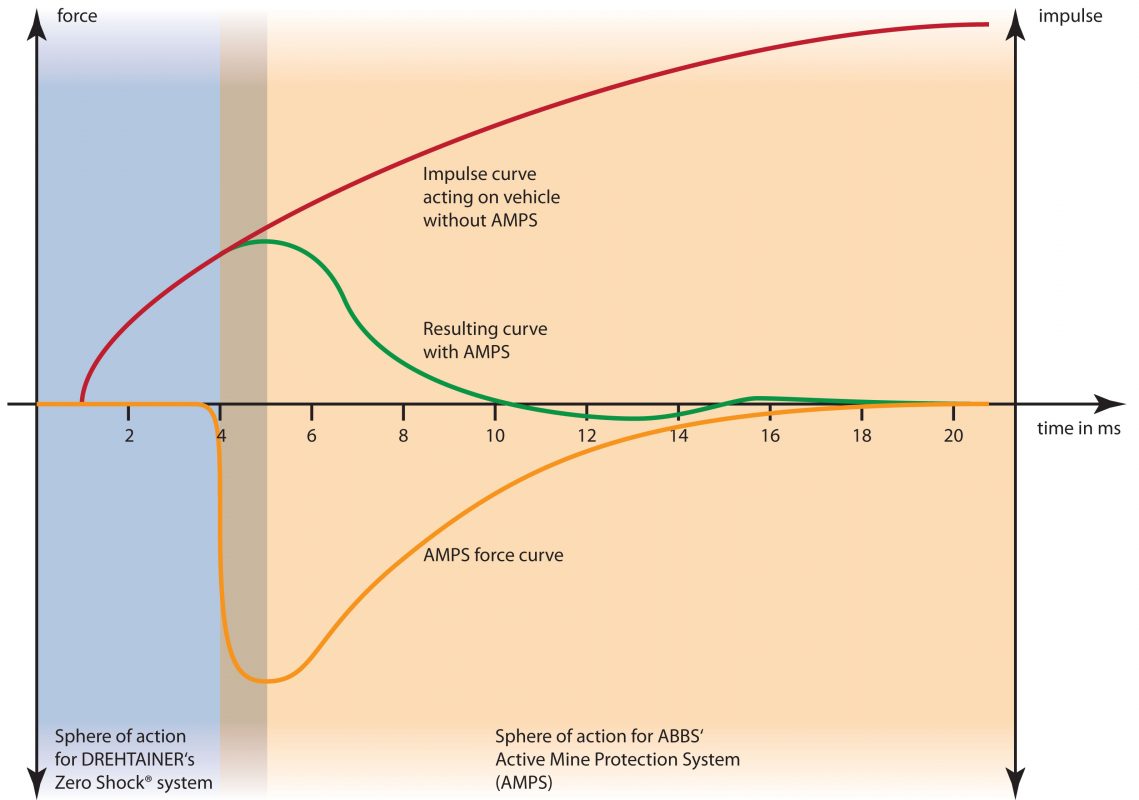