The on-going need to improve mental health outcomes globally and in Germany presents significant pressure on service organizations to design and implement innovative approaches (Bomke/Kendall-Taylor 2014, Bomke 2014 a, Bomke 2013). In an attempt to meet needs with resources that are becoming more and more limited, the Pfalzklinikum has implemented a novel, international approach to learning and capacity development called the Transnational Leadership Program (TNLP) (Bomke 2013).[i],[ii],[iii] TNLP seeks to enable and support experts at different mental health services to lead their organizations in the design, implementation and evaluation of innovative ways of addressing obstinate social issues. To do this work, TNLP seeks to move beyond one-off conferences and meetings as the dominant model of international collaboration, to a deeper, more sustained and legitimately collaborative way of supporting multi-disciplinary problem solving and collaboration. Key to this model is the idea of sustaining collaboration between perspectives and disciplines that do not typically come together to work on improving social outcomes.

In an initial phase of work, TNLP was conceptualized as a single curriculum and a shared understanding of good management and leadership, but without a common project (Bomke 2014a, Pfalzklinikum 2014). After more than four years of collaborating on process while working on individual projects, the opportunity for the group to come together around a common issue presented itself.  Through established TNLP relationships and the invitation to participate in the Alberta Family Wellness Initiative (AFWI) – The Accelerating Innovation Symposium, 2013 in Edmonton, Alberta,[iv] (Mannix 2014) the German members of TNLP began working on a common project aimed at using empirical communications research to promote policy change at a regional, provincial and state levels.[v]

During the AFWI symposium, the German members of the TNLP, now called the “German Learning Team”, identified prevention as the cornerstone of an innovative mental health strategy (Bomke 2014a, 2014b, Bomke/Kendall-Taylor 2014).

Upon considering a wide range of potential prevention strategies, the idea of resilience emerged as a uniquely effective way of approaching a prevention agenda. The idea of resilience as both an inherent and contingent concept that operates at individual as well as more systemic levels was key to this concept. Hence, the project, “Building Roads to Resilience” reflects the ability to capitalize on existing assets, while at the same time leveraging the ability of systems and individuals to gain skills and abilities over time that support resilient processes and outcomes.

Based on dialogue with AFWI, the German learning team realized the importance of including a wide range of capacities and perspectives in their work. As a result, experts from the Ministry of Health and Social Welfare, the state owned Organization for Health Promotion, the Institute for Technology and Labour (ITA) and the American-based FrameWorks Institute[vi] came together with the German team. This new collaborative group is currently working around the idea of building an empirically-based communications platform to shift public and policy-maker understandings of mental health and prevention approaches. The team is beginning the process of building a Core Story about the importance of prevention and of the potential for a strategy based on building resilience to dramatically improve mental health and more general well-being outcomes in Germany.[vii]

What is a core story?

A Core Story is a set of frame elements including values, metaphors and other tools that can be combined to create narratives that help people think in new ways about why an issue matters, how it works and how it can best be addressed. The FrameWorks Institute has developed Core Stories with partners in the US[viii] and Canada[ix] on early child development and with a group of leading foundations on education in the US.[x] A core story is designed and tested to address fundamental features of public understanding about an issue in a way that increases access to new information and perspectives.

Having common narrative elements and a shared narrative structure, but one that has the flexibility to be told in different ways by different groups, has several strategic advantages. First, having a common story provides shared language that can be powerful in bringing disparate groups of communicators together around shared issues and priorities. By having a commitment to a common story and a common language to discuss their work, members of a field can come together and forge powerful new partnerships, coalitions and synergies. Second, adopting a common story eliminates message competition, which has the ability to stall public mobilization and short-circuit political will. In short, one concerted story is more powerful in moving public opinion than are many dissonant voices in the crowd. When delivered across organizations, sectors and platforms, the dose of an empirically tested narrative is amplified, increasing the chances that it will widen the public discourse and create space for and will behind new ways of using public policy to improve social outcomes.

Put simply, having a common but flexible and empirically tested narrative increases the chances of social change by bringing together fields around a message and delivering frames in a way that has the best chance of creating political will and mobilization around an issue.

How do you build a core story?

FrameWorks’ approach to building a core story is a multi-step empirical process. It begins with gathering and distilling a set of “untranslated” messages that represent the content that the core story will be designed and tested to communicate. Establishing this untranslated set of messages involves expert interviews, literature and materials reviews and, importantly, feedback sessions that give experts the opportunity to check and refine the emerging messages.

Once the target messages are established, researchers explore the dominant patterns of understanding—or cultural models—that members of the messages’ target population hold and bring to bear in understanding the issue. This process consists of long-form, person-centered interviews designed to gather large amounts of talk in which informants explain, narrate and reason about the target issue. Cognitive analysis of these data reveal shared, deeply held assumptions and implicit but foundational patterns of reasoning. This culture mapping process might also consist of guided focus groups designed to arrive at an understanding of how social norms and expectations mediate the expression of these cultural models in mind.

The untranslated story and the set of default cultural models are then compared in a process that FrameWorks calls “mapping the gaps”. This comparative analysis reveals the primary areas where expert and public thinking on the target issue do not align and where framing work is required to improve the accessibility of expert messages for non-expert audiences.

Armed with a systemic analysis of the locations and features of the gaps in understanding, researchers begin to design framing strategies and tools and to test them for their ability to improve understanding of specific components of the untranslated messages. The result is a set of empirically-tested tools with demonstrated power to “translate” the target messages distilled at the beginning of the process.

The process of building a core story does not end with research, but continues with training would be messengers in framing best practices as well as in how to use specific communications tools and strategies particular to a target issue.

This is the process that the German learning team began in September 2014. During a week in early September, we grappled with developing a set of untranslated messages around prevention and resilience. The cornerstone of the untranslated story that emerged is the idea that focusing on prevention can help systems shift from disease to health frameworks and dramatically improve a wide range of outcomes. Building resilience is an underused, but potentially effective prevention strategy. In this context, we refer to resilience not as an individual trait or exclusively at the individual level. Instead we conceptualize resilience as features of individuals, communities and systems that can be build to improve the ability of populations to respond positively in the face of adversity.

The following graphic provides a more detailed view of the untranslated set of messages that the arrived at as result of its work: 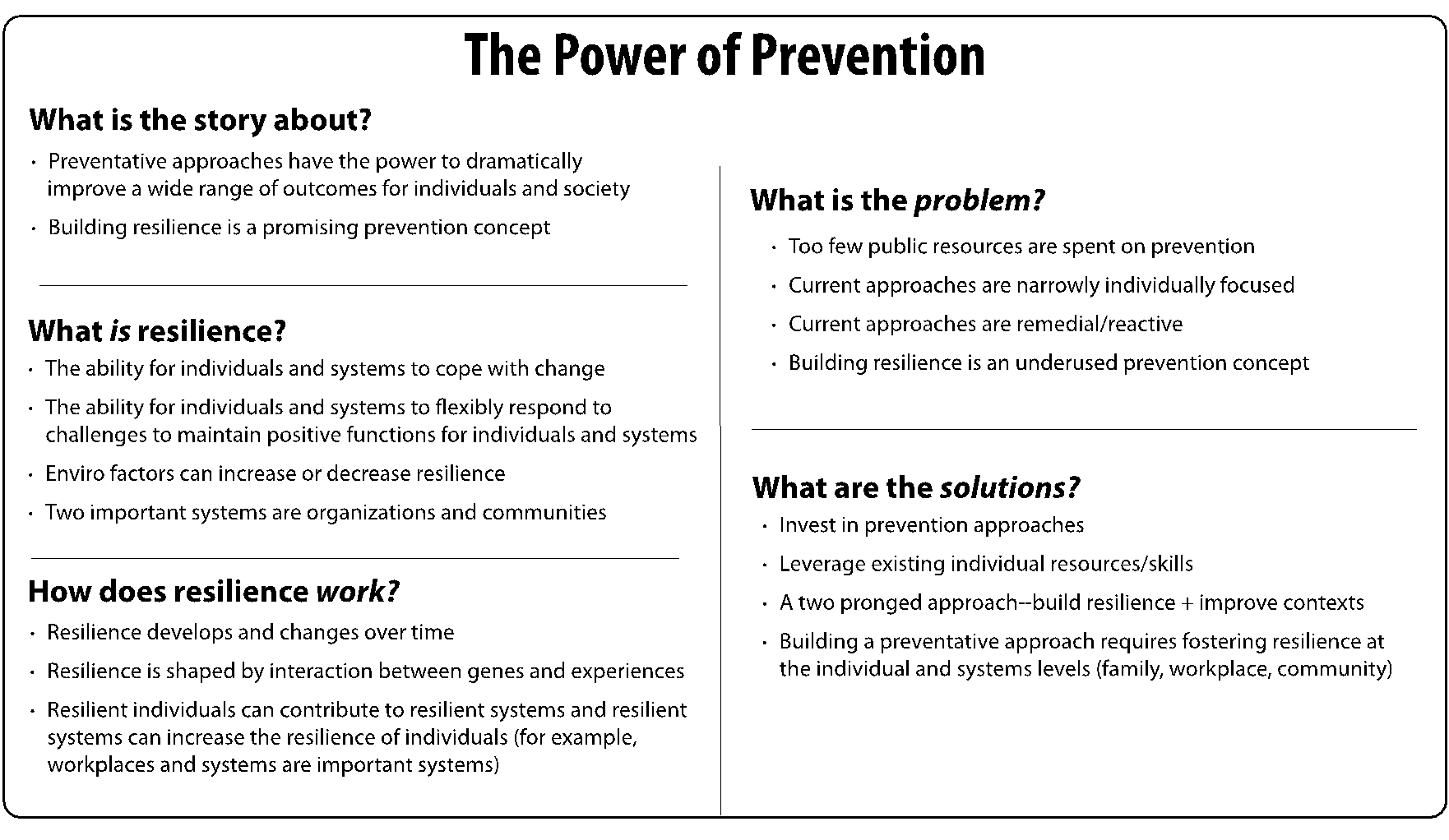 If decision-makers and members of the public were to deeply understand this idea, policies and practice in the area of mental health and beyond would begin to shift and outcomes across a wide range of key health and well-being dimensions would improve. The task ahead is to explore the culture into which we will be communicating this idea and to develop and test strategies that can most effectively help people deeply incorporate this perspective into how they think about their socio-political worlds.