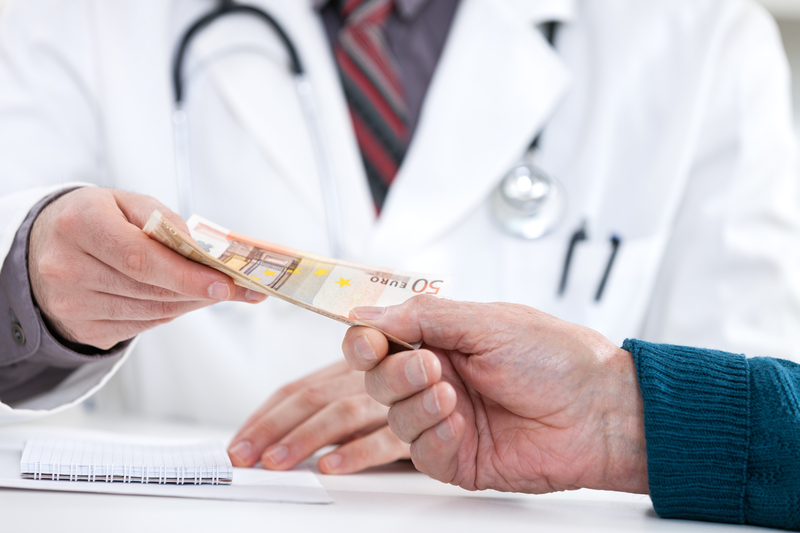 The study was developed by ECORYS, a Dutch consultancy and research company, in collaboration with EHFCN, the European Healthcare Fraud and Corruption Network.

Aside from being the first ever on the subject of corruption in healthcare in Europe, the study has the merit of offering an astonishing overview of the way corruption has affected healthcare in every 28 of the EU countries. The 86 corruption cases presented read like a sad “best of”.

Unlike the common assumption that corruption thrives in southern European and former communist countries only, these cases show how stakeholders in “advanced” western and central European healthcare systems incline to corrupt practices as well.

Corrupt practices vary from “informal” payments requested by doctors from patients, to kickbacks paid by medical devices and pharma companies to physicians.

Worldwide 10–25% of public procurement spending in health (medical devices and pharmaceuticals) is lost to corrupt practices. European figures are not available.

The main obstacles in countries in which corruption is widespread include scarcity of health care services (e.g. organ transplants), relatively low level of healthcare funding (i.e., where healthcare expenditure as a percentage of GDP is below 7%), weak controlling mechanisms, high out-of-pocket payments for healthcare, self-interest and greed from the side of the healthcare providers.

Here are some examples as reported in the study.

In Austria a medical doctor working at a regional hospital asked for €60 per visitation on top of the official charges. Indications are that this is not an isolated case and that this problem is of a systemic nature.

In another case, a hospital doctor offered patients the possibility of moving up waiting lists for cash payments of between €300 and €500.

One of the most prominent scandals in the history of the German health sector was the Globudent scandal. The company ‘Globudent’ imported cheap dentures from Turkey and Hong Kong and sold them overpriced to dentists and dental firms.

Dentists would subsequently invoice the cheap dentures to the health insurance companies as if these were high-end dentures ‘made in Germany’.

The profits enabled Globudent to pay kick-backs. In some cases these reimbursements added up to over €200 000 for individual dentists.

About 450 dentists were involved in the scheme, and over 40 of them lost their license.

Royal Philips Electronics was fined $4.5 million by the US Securities and Exchange Commission (SEC) because of alleged bribery in Poland. The company accepted to pay the fine imposed by the SEC to settle the matter. In at least 30 bids, employees of Philips’ subsidiary in Poland made improper payments to public officials of Polish healthcare facilities to increase the likelihood that public tenders for medical equipment would be awarded to Philips. Philips would submit the technical specifications of its medical equipment to officials drafting the tenders, who would incorporate these specifications into the contracts.

An Executive Director of a district hospital in northern Finland was accused of favouring companies owned by his son. In 11 instances over 8 years the Executive Director bypassed procurement legislation and directed major IT program contracts to these companies (health care IT programs are classified as medical equipment).

The deals were constructed in such a way that other players had no chance to participate. Agreements were made in private face-to-face meetings. Purchases were sometimes also delayed so that the family companies had time to prepare for the calls for tender.  The Executive received a 9-month suspended sentence for aggravated malfeasance in office.

The overall impact of corruption in healthcare on society and on individuals can be (much) larger than the monetary value of the sums involved.

Indirectly, corruption in healthcare may cause productivity loss through bad health, distrust in provisions of services by the government, distrust in the health system and distrust in society as a whole.

How corruption in healthcare can be “institutionalised” has been demonstrated by “Doctors against corruption”, a Serbian organisation who successfully detected and disclosed health corruption scandals in the country.

They played a major role in stopping the trade in radiotherapy waiting lists for cancer patients at the Institute of Oncology Vojvodina and managed to prevent the malfunctioning of the oncology services, costing many patients’ lives due to systematic corruption. They also denounced several cases of EU and World Bank funds being embezzled, resulting in the deterioration of the Serbian health sector.

An Action Plan to fight the corrupt healthcare system, although adopted by the Serbian government, has not been implemented so far.

The degree to which the misuse of (high-level) positions is a problem within a country, largely depends on the extent to which corruption is embedded in the economy and society. There is no hard data available on the prevalence of this type of corruption in Europe, but it appears to be a problem particularly in countries where corruption is deeply embedded in politics and society, such as Czech Republic, Latvia, Croatia, Slovakia, Romania, Italy, Bulgaria, and Greece. However, it is in many cases difficult to draw a clear line between normal lobbying and unethical forms of trading in influence.

Isolated healthcare corruption can be countered with more targeted measures (such as anti-fraud and corruption reporting hotlines).

This bottom-up, as well as top-down approach requires a sustainable effort and, with time, a change in attitudes helping to prevent corruption from the outset should be the result.

EHFCN has formally been established in 2005 as a not- for- profit international association by Belgian law. The Network is membership based. The 16 members from 14 European countries represent public and private healthcare insurers, health financers and payers who all have the countering of fraud, waste and corruption in healthcare as their core business or as part of their mission.

The aim of EHFCN is to improve European healthcare systems by reducing losses to fraud, waste and corruption and its objective is to help members to be more efficient and effective in their work of prevention, detection, investigation, sanctioning and redress of healthcare fraud, waste and corruption, with the ultimate goal of preventing money from being lost and returning money to healthcare services for the benefit of every patient.