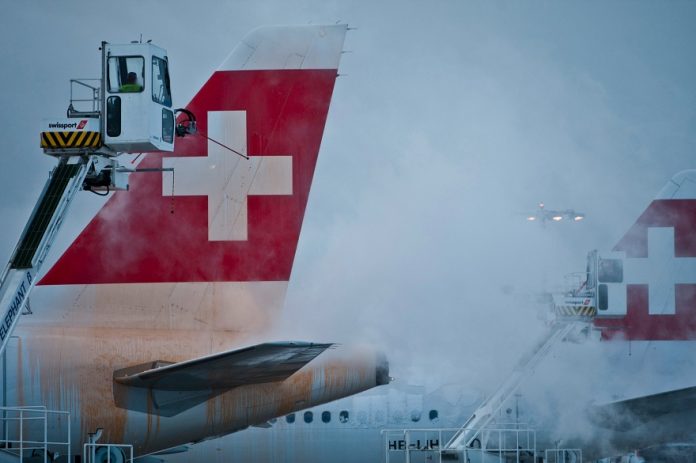 Ms. Caterina Talerico and Mr. Dirk Kauffeld from Zurich Airport Ltd details how the airport is using new methods to treat the sewage from the de-icing of planes…

Aircraft operating areas and aircraft itself have to be kept free of ice and snow for safe flight operations also during winter-time. Mechanical clearance is therefore not sufficient. However, use of conventional de-icing salts is not acceptable due to their corrosive effects on aircraft. On these grounds, operating areas are cleared mechanically at snowfall before chemical de-icing agents are applied. Additionally, the formation of ice at the wings and engines of aircraft must be prevented and the aircraft needs to be cleared from adherent snow and ice. For this purpose, the organic compound Propylene Glycol, for certain applications diluted with hot water, is applied by specialised vehicles. Depending on the weather conditions and the respective size of the aircraft, 200 to 500 litres of Propylene Glycol are needed for a single de-icing of an airplane. During the application, already more than one third of the agent drips off.

As a result of the de-icing and the dilution of precipitation, a large amount of sewage incurs on the operating areas during winter, which is contaminated with de-icing agents. A direct discharge of this sewage containing organic compound into local water courses would cause an impairment of the ecological system. The consequences would be the growth of fungi, an increase of silting and the decrease of the oxygen content. This is why these kinds of sewages are treated at Zurich Airport.

The active treatment system for de-icing sewage is the result of a long-time evaluation phase at the Airport. The system today involves chemical and physical methods as well as natural degradation processes. Depending on the concentration of carbon, the sewage is treated through a different process. A specifically developed control system delivers the data basis for adequate decisions. This system automatically evaluates all measured parameters such as carbon concentration, filling level of storage ponds or groundwater level.

Medium concentrated sewage is led to the spray irrigation system. This is a method specifically developed for Zurich Airport and it was actually copied from nature. Sprinklers spray the sewage on suitable grass land. The organic compound contained in the sewage is degenerated during the infiltration process by ways of microbial activity in the top 60-90cm of the soil. The cleaned waste water is led through the drainage system into the Glatt River. The performance of this system is 99%. The idea of this procedure is based on the fact that always a considerable amount of the de-icing fluid, dropping from aircraft during take-off, has been dispersed into the fields without contaminating the groundwater.

Low contaminated de-icing sewage is led through retention filter ponds. These are particular soil filters which are also used for treatment of sewage from roads. Storm water from the operating areas is also discharged in these ponds during summer.

The complex drainage system of Zurich Airport and the treatment of de-icing sewage in particular, enable the airport to capture and treat 95% of the carbon load in waste water. This is a substantial share to the protection of the water quality of the Glatt River, which is the main receiving water course at Zurich Airport.

During the past 15 years, Zurich Airport invested more than 100 million in total to develop and construct the whole drainage and treatment system. Today, the catchment area comprises 57% of the airport’s operational areas, which contains all substantial sources of de-icing sewage. The volume of subterranean storage ponds is 10’000 m3 and retention filter ponds have an extent of 6 hectares. The spray irrigation system extends on an area of 45 hectares of grassland.