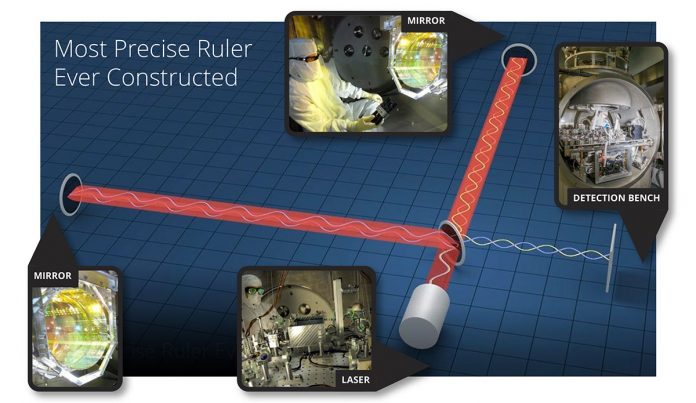 In September 2015, almost exactly one hundred years after Einstein’s prediction, the LIGO observatories detected the first gravitational wave. This fantastic achievement was based to a large extent on technology developed by European groups. It was honoured in 2017 with the Nobel Prize in physics.

Gravitational waves are minuscule distortions of the fabric of space and time. They travel through the universe at the speed of light undistorted for billions of years. Upon arrival on Earth, they deform space by a tiny little amount and then continue their path through the universe. A gravitational wave detector might be envisioned as a simple scale, however a scale with incredible resolution. They are laser interferometers built on the concept of a Michelson interferometer. They measure the distance between mirrors – called test masses in the jargon of gravitational wave physicists – over kilometre scales. They are capable of detecting the movement of a test mass by substantially less than the radius of an atomic nucleus. Imagine the measured section extended to the distance between Earth and our Sun, the interferometers detect a change of the distance of less than the diameter of the smallest atoms. In this article, I will talk about the challenges in the realisation of such precision and about the path to even higher sensitivity1.

Einstein Telescope constitutes the European path into the future of gravitational wave science. It will:

To achieve these improvements, Einstein Telescope must be:

Einstein Telescope represents a unique European infrastructure for decades to come. It will allow a continuous improvement of the detectors as new technologies become available and ensure leadership in this fascinating science.

Optics: Glass is not a useful material for mirrors at cryogenic temperatures in the short wavelength infrared. Under these conditions, silicon is the most promising bulk material with sapphire as a second alternative. Silicon promises good heat conductivity and zero thermal expansion at specific temperatures. But today there is no silicon optics available. Production techniques for mirrors up to 80 cm in diameter including their figuring, polishing and coating, need to be developed, with a potential transfer to many other applications in optics.

Vacuum technology: Einstein Telescope includes the largest ultra-high vacuum system ever built by mankind: more than 120 km of pipes of roughly 1 meter in diameter and many smaller pipes. The stainless steel for conventional pipes will cost tens of millions of Euros. New corrugated or stiffened steel pipes or composite fibre pipes with steel liners could reduce the cost and improve the vacuum if built from new steels with reduced hydrogen outgassing. These new technologies may be applicable to any vacuum system.

Seismology: Seismic waves penetrate the rock surrounding the telescope with periodic variations in the rock’s density. The gravitational pull of the denser regions shakes the test masses a tiny little bit just as a gravitational wave will do. Scientists call this effect Newtonian noise as it is described by Newton’s law of gravity. Arrays of seismic sensors will surround the observatory. If it is possible to reconstruct the seismic waves, their impact on the test masses can be estimated and corrected for. A new technology for seismology with potential application to other wave fields.

Research and development for Einstein Telescope has long started and the industry is eager to contribute and to benefit from the developments. A few platforms for networking and cooperation are already in place2, more in preparation. The socio-economic impact of the project can barely be overestimated.