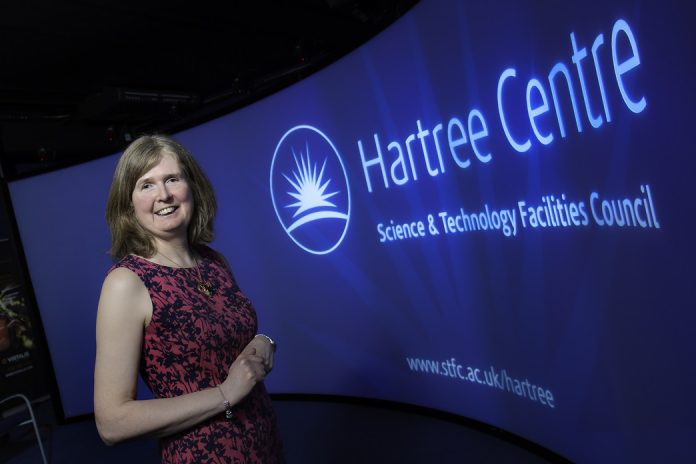 Previously known as parallel computing, high-performance computing (HPC) involves using a computer system with many processors to undertake a specific activity, by running tasks in parallel rather than serially. Sometimes referred to as a supercomputing, HPC is relatively new, but has been traditionally used mainly by scientists. However, organisations such as the Science and Technology Facilities Council’s (STFC) Hartree Centre are working with companies to make the technology more accessible to a wider range of people. As technology develops, more people are using computer systems such as laptops and iPads with several different processers and are therefore more aware of the potential for speeding up everyday tasks by using more powerful computing devices. As technology evolves it’s important for its users to evolve with it and develop the skills needed to use these novel technologies effectively.

Here, Open Access Government Editor Laura Evans chats with Alison Kennedy, Director of the Hartree Centre to find out why the UK should be taking full advantage of HPC, and why it’s important to ensure that more people are trained to use these supercomputers.

What is HPC’s role in the UK’s digital revolution?

There are a few ways that HPC is used in the UK. One of the more traditional ways involves using a computer to build complex models and virtual simulations that allow you to explore some of the challenges we face today. This enables you to undertake certain areas of research in a more effective way, rather than doing experiments or observations over a longer period of time. Climate change, for example, takes place over thousands of millions of years, whereas a computer model would enable you to compare historical data to live measurements, allowing you to look forward, identify patterns and make predictions about what’s likely to happen in the future. HPC means that we can investigate some of the big challenges that the UK faces socially and economically, identifying new, industrially-relevant applications.

How beneficial is it to the UK and how should it be utilised?

Primarily, HPC is used to help make the UK more globally competitive, both in our academic research and in creating opportunities for industry. For example, in product development, there is a drive to reduce development and manufacturing costs, testing to make products more reliable and reducing the environmental impact. HPC can be applied in all of these areas to help explore options for businesses.

On the research side of things, HPC has been used for key science projects, such as in the discovery of the Higgs Boson, as well as in a number of environmental challenges, like predicting earthquakes. It enables you to build models and predict when things are likely to happen in the future. Another benefit is being able to use computers to analyse very large amounts of data that you wouldn’t be able to analyse using traditional methods.

What impact can HPC have on key challenges such as climate change?

HPC opens up a different area for discovery. Scientists will develop a theory about what could happen, but HPC allows you to run through a large number of different scenarios to work out which ones are most likely to happen. It means that you don’t have to wait; you can try to foresee ahead. Predicting weather forecasts, climate change, earthquakes are the big environmental applications. However, you can also look at the spread of disease and the resistance to antibiotics. HPC allows you to use your existing data to try to bring together a number of different pieces of information and use the computer to integrate that data while producing a model for what is likely to occur, providing valuable insight.

What role does HPC play within research and innovation?

It enables 2 things. It opens up some areas of research we couldn’t previously look at; for example, there is some work that is being done on molecules, atoms and neurons etc… Some items of interest are too small to be investigated experimentally, but they can be examined theoretically on the computer. There is some work in fields like astronomy, where HPC has played a part in discovering new planets and new stars. The computer simulations are even more advanced for what can actually be seen from the new telescopes, but they can identify meaningful patterns in existing data and measurements to make sure the telescopes are focussed to where they think the interesting things will be.

New materials are particularly big as well because it’s very expensive to experiment with every possible combination. Scientists try to predict what is likely to work well together. HPC is used to cut down the experimental space and try to get some ideas of which materials are going to be the most promising areas to be investigated in academic or industrial research. Then, hopefully, you can get results faster.

Where do you hope HPC to go in the future?

There are several things that we are hoping to achieve at the Hartree Centre. One of them is to continue to make HPC more accessible for a range of new industries because it is clearly an important technology. But at the moment the barriers to using it can be quite challenging because people typically will need to have specific programming skills and will need to be comfortable working with things like Linux which is the operating system used by big computers.

There are a lot of areas where new packages, programming packages or languages can be used to make it easier. One of the big fields which is currently taking advantage of HPC is the life sciences sector. These people do not tend to come from a computing background, so we’re looking at where the challenges are and what can be put in place to make it easier for a wider range of people to access the technology.

At the Hartree Centre we’re primarily working with groups of companies to try to identify common challenges across sectors. Where companies say they experience a barrier to the UK being competitive or if something stops them from developing a new product we’ll work with them and look at what research is being done in the UK and how it can be applied to their organisation. We’ll work out how the research can be used in combination with our computers and our expertise to deliver a proof of technology or a proof of concept solution. We’ll then go back to the companies and work out in more detail exactly how it can be used to solve their particular problems

What are the key challenges that come with novel technologies such as HPC?

One of them clearly is education and training, because the technology develops very quickly. For example, we essentially need a new computer every 3 or 4 years. This means you need to have people in place who can understand how to use the latest technology. Most companies are keen to take advantage of HPC, but they can’t afford to have large numbers of people who need to learn how to use new systems that often. It’s about getting the balance between identifying who are the earlier adopters who would benefit most from it and supporting them.

It’s important to highlight the challenges in the UK when it comes to developing the skill sets we need. The computers themselves are just tools and what we need is a skilled population who understands both the science and the technology. Traditionally, HPC has been portrayed as big computers which are difficult to use. That’s partly true, but on the other side of things we really should be trying to get across the great potential this tool has for driving economic and social change in the UK.

Director of the Hartree Centre