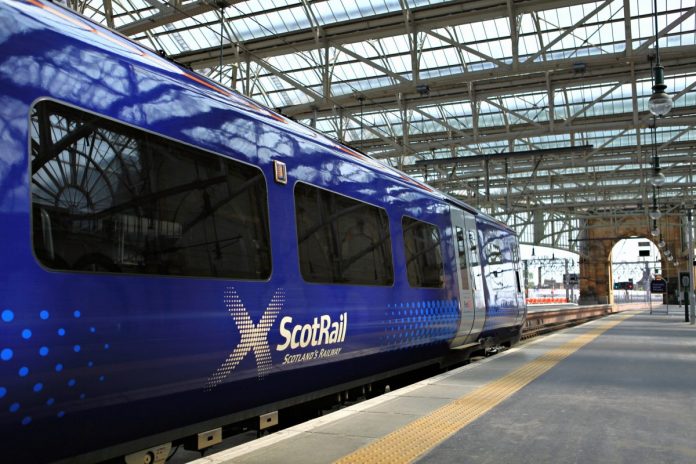 Abellio, the new franchise owner of ScotRail, has unveiled the designs of 70 new trains being built for the service…

The 70 new ScotRail trains will operated across the Edinburgh-Glasgow via Falkirk High Line, Scotland’s busiest route, by 2017. The Stirling-Alloa-Dunblane line and south Glasgow suburban routes will also use the new trains.

Dutch rail company Abellio beat out competition from former operator FirstGroup last October to take control of the £2.5bn franchise. It will takeover services from 1 April.

The new carriages will be built by Hitachi Rail Europe. It will see 46 three-car and 24 four-car AT200 EMU units built. The first seven trains will be constructed in Japan at Hitachi’s Kasado factor while the remaining 63 will be built in County Durham at Newton Aycliffe.

The deal will give the Scottish government the opportunity to buy the full fleet of trains after 25 years for £1. This would ensure the trains could be used beyond Abellio’s contract.

Transport Minister Derek Mackay said: “With the new ScotRail franchise, a number of impressive infrastructure projects and these slick new trains, we are giving Scotland a railway to be proud of.

“Abellio’s winning bid for the ScotRail franchise included several exciting proposals and I look forward to seeing it all take shape from their takeover of the service in just a few weeks.”

The trains will run on the main Edinburgh to Glasgow line following work under the Edinburgh-Glasgow Rail Improvement Programme. This would enable eight-carriage electric trains to run between both cities, providing about 50 per cent more seats during peak times than current services.

Mackay said: “Passengers will face some disruption as a consequence of these massive construction works, but they are necessary if we want an improved railway.

“If we want a top class service then we have to carry out these works.

“We will keep disruption to a minimum, we will share information about alternative routes and we try and ensure that routes are maintained throughout.

“We are carrying out the works at the points of time where it will have the least impact on people. But it will be well worth the wait.”

Chief Executive of Abellio Jeff Hoogesteger said: “This is an important deal for passengers and for Scotland.

“New trains for Scotland were a key feature in Abellio’s bid for the franchise and we are excited to be pressing the button on the delivery programme.

“The arrival of 24 Hitachi AT200s by December 2017 and a further 46 by December 2018 will ensure that the full benefits of the Edinburgh Glasgow Improvement Programme are realised for passengers.”