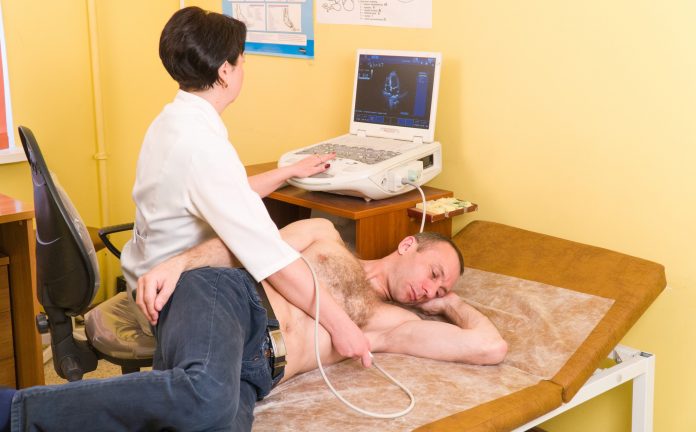 The role of ultrasound for Inferior Vena Cava measurement (IVC) in patients presenting with shortness of breath is often debated. Authors have disputed different modes and points of measurement and with varying probe placement.1-5 Additionally, patient position, habitus, degree of respiratory distress, and the presence of mechanical ventilation can influence the size and collapsibility of the IVC. Common agreement may be found from a recent metanalysis suggesting a moderate level of evidence supporting the IVC diameter is low in hypovolemic patients as compared with euvolemic patients.6

The IVC is visualised in the long axis plane in patients who are semi-recumbent or supine. The IVC should be visualised as it enters the right atrium, to differentiate it from the aorta that runs parallel to the IVC. With the BRIPPED protocol, the sonographer may image the IVC, and obtain cardiac windows using the same lower frequency phased array probe to evaluate ejection fraction and pericardial effusion. The probe is placed below the xiphoid bone, and the probe marker rotated towards the patient’s head. Alternatively, the probe may be placed anterior to the mid axillary line, with the probe marker towards the head.

IVC-size and collapsibility: Using an IVC size cut off of 2.0 cm has been shown to have a sensitivity of 73% and specificity of 85% for a Right Atrial Pressure (RAP) above or below 10 mmHg. The collapsibility during forced inspiration of less than 40% has even greater accuracy for elevated RAP (sensitivity 91%, specificity 94%, NPV 97%).18 A low frequency phased array or curvilinear probe is used to visualise the IVC long axis, and dynamic imaging is used to assess collapsibility as either complete or less than 40%.

Pneumothorax: Bedside ultrasound is more accurate than supine chest xray with diagnostic ability approaching that of CT. 19, 20 The same windows for B-lines are utilised for pneumothorax screening. Additionally any area of decreased breath sounds, or crepitus palpated along the chest wall is evaluated for pneumothorax with a high frequency linear probe.

Pleural effusion: EUS has been shown to have an accuracy similar to a CXR for evaluation of pleural effusion.13, 14 A low frequency phased array or curvilinear probe is used to evaluate each mid axillary line at the costophrenic angle in the sitting patient.

Pericardial effusion: EUS has a sensitivity of 96% and specificity of 98% compared to formal echocardiography. 21 A low frequency phased array probe is used to evaluate pericardial effusion from an apical 4 chamber view and a parasternal long axis view of the heart.

DVT in lower extremities: Ultrasound was performed by emergency physicians using a two point compression venous ultrasound on patients with suspected lower extremity DVT. This approach had a 100% sensitivity and 99% specificity in diagnosing DVT, compared to a reference venous ultrasound in radiology.25 A high frequency linear probe evaluates compressibility of the common femoral and popliteal fraction. Dynamic qualitative assessment of ejection fraction is classified as normal, depressed, or severely depressed.

DVT in lower extremities: Ultrasound was performed by emergency physicians using a two point compression venous ultrasound on patients with suspected lower extremity DVT. This approach had a 100% sensitivity and 99% specificity in diagnosing DVT, compared to a reference venous ultrasound in radiology.25 A high frequency linear probe evaluates compressibility of the common femoral and popliteal probe to evaluate the parasternal long axis and apical 4 chamber, noting the presence or absence of pericardial effusion, ejection fraction, and RV strain. Then the long axis of the IVC is evaluated for dynamic collapsibility. Moving laterally, the costophrenic angles are evaluated bilaterally for pleural effusion. The probe is switched to the high frequency probe to evaluate each lung apex is evaluated in the mid clavicular line for the presence of pneumothorax and B lines. Lastly, the dynamic 2 point DVT screening is performed with compression ultrasound. The BRIPPED protocol and other bedside ultrasound resources can be viewed here: