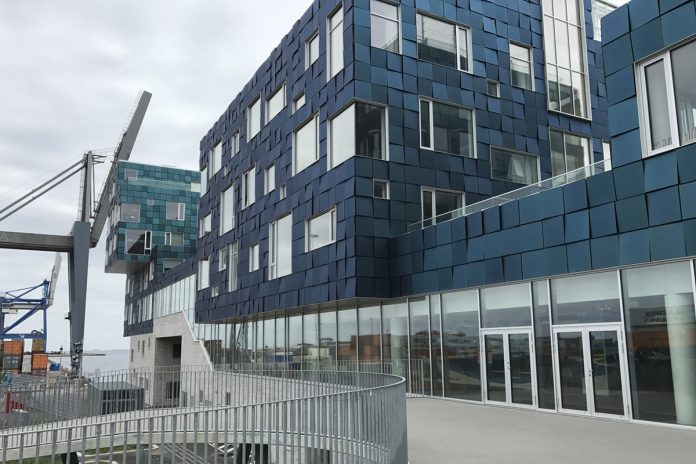 Copenhagen International School (CIS) is a private school owned by the ECIS foundation, which managed to get funding from several large funds in Denmark for the realisation of the school, where all education is in English.

Based on this, there was an interest to make a payback to the society by establishing the largest BIPV (building integrated photovoltaic) installation in Europe at CIS, with approximately 6000m2 equal to 720kWp photovoltaic (PV) in total.

Due to this, it has been agreed that the project at CIS should be introduced into the Danish ForskVE/ EUDP project, “LowCost Active House BIPV” and in connection to this should have made a full Active House labelling by Cenergia, now part of Kuben Management.

The CO2 concentration level at CIS has been calculated at 350ppm above outdoor CO2 concentration, which is equal to level 1 of the Active House radar (which is the best) and concerning the maximum temperature level, this is calculated to level 2 in the Active House radar which means it is in the range between 21°C and 26°C during the year. These good results are based on using decentralised ventilation systems, which provide a high air exchange.

The lighting quality is also good based on a combination of LED lighting and access to daylight. The windows area has an average ratio of around 20% of windows area over the floor area, which is expected to ensure a good level of daylight inside the rooms.

There are also no emissions from heating and cooling systems because district heating and district cooling are used for the school.

The Danish Be15 calculation shows an overall final energy use of 15 kWh/m2 per year at CIS, which is better than low energy class 2020 in Denmark, which demands a maximum level of 25kWh/m2 a year for a school.

For ventilation, an electricity use (SEL value) of 1.3 kJ/m3 is calculated and boasts a heat recovery efficiency of 82% as an average.

The PV modules were produced by SolarLab from Denmark as 60 W green chromatic coated hardened glass panels of 700×716 mm, with 16 monocrystalline PV cells (6 inches) and a bypass diode, where eight panels are coupled to a micro inverter which is easily accessible from the loft.

The panels were wind tunnel tested prior to use to avoid noise. Furthermore, the panels have different tilts with a 4° inclination randomly chosen.

The contribution from 720kWp PV panels on all facades (approximately 6000m2) is 10.7kWh/m2, which can be compared to the annual amount of electricity used for operation: lighting, fans, pumps and cooling of 7.0; 5.3; 0.2 and 0.9 respectively.

It is important to point out, that approximately 58% of the central district heating/cooling in Copenhagen is produced by green energy sources. Moreover, renewable resources produce also 50% of the Danish grid electricity. In total, taking in consideration the renewable aspect of electricity and district heating from the grid, 69% of the energy demand is supplied by renewable energy sources, resulting in a final energy consumption in the building of only 6.7 kWh/m2, equal to a level 2 in the Active House radar.

CIS is a good example of the Prosumer building of the future – with BIPV on all facades and with a good architecture due to the special PV panels and architectural design.

And with about 39% of the total electricity use covered by the PV modules, it is a good example of an almost zero energy building, which also has a good score in the Active House labelling.