A recent study – undertaken ahead of World Mental Health Day 2020 – reveals that 1.9 million (27%) of UK smokers say they would like to quit for mental health reasons, compared to just 16% quitting over COVID-19 concerns

The Quitting Smoking for Mental Health study of over 1,000 current and ex-smokers across the UK was conducted by smoking cessation advocates Vape Club ahead of World Mental Health Day on 10th October and the beginning of Stoptober 2020.

The research highlights the links between smoking and mental health conditions, asking current and ex-smokers whether they believe it impacts their mental health, whether they have seen an improvement since quitting, and what measures could have been brought forward in public spaces and at work to help them to quit.

Data from Public Health England shows that average smoking prevalence for adults with mental health conditions is 27%, compared with 14% of the general population.

What happens to your mental health after quitting smoking?

Asking ex-smokers the reason why they quit, 13% said they had quit for their mental health. This ranked higher than for family reasons or for the birth of a child. Mental health was the third most common response, behind ‘for my physical health (74%) and ‘cost too much money’ (51%).

44% of ex-smokers said they have noticed an uplift in their mental health since quitting. This effect can be seen to increase through the smoking cessation process – when participants were asked whether they experienced effects on their mental health when quitting, 39% noticed a positive improvement in the first four weeks after quitting. This figure rose to 52% after four weeks. 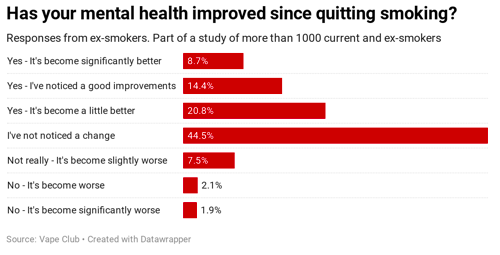 “People’s awareness of the link between smoking and poor mental health is clearly on the rise. There’s long been a focus on the physical effects of smoking, but it’s encouraging to see that the serious emotional effects – as well as the additional strain that smoking puts on the NHS mental health services – are being acknowledged too.

The overall picture of smoking in England is moving in the right direction, but the statistics on smoking prevalence remain worrying, and far more can be done to educate people on cessation tools like vaping that can make a huge difference”.

Why are those suffering from a mental health condition more likely to smoke?

“Smoking rates for those that suffer with depression are twice as high as those who do not suffer with depression.” says Holly Beedon, the Clinical Lead at Living Well UK. “For those with schizophrenia they are three times more likely to smoke heavily. For many people, smoking is a stress relief and you will often hear people say that a cigarette helps them to relax. In actual fact, it increases anxiety and tension.”

“Smoking pushes the brain to switch off its own method for making dopamine. In the long term, the dopamine supply reduces, which in turn encourages people to smoke more. People with depression in particular have difficulty when trying to stop smoking and it is found that the withdrawal symptoms are more severe while trying to give up.”

What can be done to help smoking cessation?

The correlation between smoking and poor mental health paints a bleak picture of the strain being placed on the NHS – with both stop smoking services and mental health services bearing the weight of the problem. But these are not the only solutions.

Ex-smokers surveyed gave the below responses when asked what would have made quitting smoking easier, and it’s clear to see that bans are an effective measure. These continue to be rolled out, with hospitals recently banning smoking on all premises and proposals to ban smoking areas at pubs. Fines for dropping cigarette butts are shown to be the least effective way to encourage smoking cessation.

The following charities can offer support for smokers and non-smokers who are struggling with mental health: