A common experience to the influenza vaccine: wouldn’t it be nice!

Dr. Patricia Doyle-Baker discusses the AIM study, the issues and the results.

We no longer need to be convinced based on the depth and breadth of the evidence that obesity is a risk factor for many disease conditions. Perhaps not as well-known, is the association between obesity and severe influenza outcomes. According to Sheridan et al. (2012), this association was well documented in several epidemiological studies following the 2009 H1N1 influenza pandemic. This growing body of literature suggests that not only do overweight and obese individuals experience a greater proportion of negative outcomes as a result of exposure (Louie et al., 2011, Van Kerkhove et al., 2011), but also vaccination response differs in young and middle-aged adults (Alberta Health, 2014).

Differences in vaccination response have been documented beyond age and underlying disease (Ohmit et al., 2013). For example, the volume of physical activity was found to influence both the risk of upper respiratory tract infections (Neiman, 1994), as well as antibody production to the influenza vaccine (Kohut et al., 2002). This information led us to investigate the potential role of emerging lifestyle factors on the effectiveness of immunization in young men. We surmised in the AIM (Adiposity, Influenza, Men) study that protection against the influenza virus would be similar among most participants but that increases in adiposity and lower levels of physical activity would reduce the effectiveness of vaccination (Stewart et al., 2018).

In immunology, antibodies mediate protection against infection by interfering with antigen (a virus or foreign substance) binding to host-cell receptors. During an infection or immunization, antigens enter the blood, and the immune system starts to produce antibodies in response. Most individuals develop detectable antibodies within 3 weeks; this time period is referred to as seroconversion.

The subtype of the influenza virus, for example A/H1N1, is determined by proteins. These proteins are embedded in the lipid membrane of the influenza virion, which is roughly spherical in shape. The inserted proteins are linked to sugars – known as hemagglutinin (HA) and neuraminidase (NA). Virus protection should correlate with the antibody titers to the HA surface proteins. This is measured by the HA inhibition assay (HAI), the primary method for determining quantitative antibody titers for the influenza virus (Zacour et al., ‎2016). In the AIM study the HAI assays for each influenza strain were performed in duplicate by the Canadian Centre for Vaccinology.

The influenza A virus is constantly changing and is generally responsible for seasonal flu epidemics. Seasonal influenza vaccines are trivalent (TIV) because they contain three circulating subtypes (A/H3N2, A/H1N1 and B strains) that are updated yearly to best predict the strains circulating in the community. Inactivated influenza vaccines are the most commonly used and are standardized according to the quantity of the major surface antigen (Cox, 2013). During the 2014/2015 season TIV was produced by GlaxoSmithKline under the Fluviral® name with subtypes A/California/7/2009 (H1N1) pdm09-like virus, A/Texas/50/2012 (H3N2)-like virus, and B/Massachusetts/2/2012-like virus (Yamagata lineage). 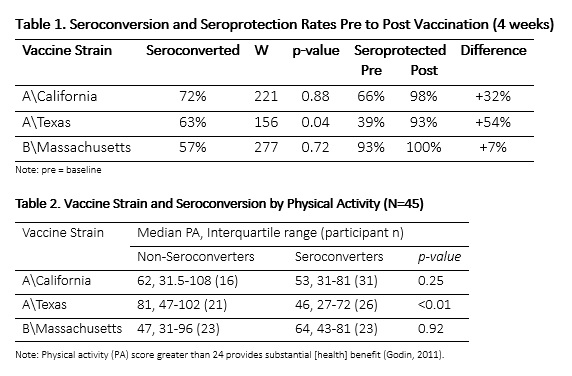 The most interesting result was the trend towards lower vaccine response in these young men who were highly physically active beyond the recommended 150 minutes of moderate to vigorous intensity of activity per week for adults aged 18-64 years (Canadian Society for Exercise Physiology, 2011). Our sample however, represented a subset of the North American population with lower adiposity (mean BF 17.1%) when compared to a similar age range (20-39 yr.) and body fat (mean BF 26.1%) (Li et al., 2009). This is all somewhat surprising; however, we must be cautious given the lower than anticipated return rate (59%), the lack of previous influenza vaccination (66%) and the exploratory nature of the study.

From a public health perspective, it ‘would be nice’ if a common experience occurred with the influenza vaccine. However, our study suggests that young very active males may experience less protection, and if so, steps should be taken to consider more than just age and disease when classifying influenza “high risk” groups. The inclusion in future research of a direct measure of aerobic capacity alongside body composition and physical activity volume would better address the complexity of their biological interface. Regardless of this, it goes without saying that yearly influenza vaccination remains the best strategy for the prevention of influenza virus-related disease and reduction of disease severity and mortality.