Home Open Access News Research & Innovation News Batteries – Calorimetry and Safety at the IAM-AWP: At the forefront of...

Dr Carlos Ziebert, Group Leader at the IAM-AWP of the KIT, explains the different areas of their current research in the field of Lithium-ion and post-Li batteries

The group focuses on calorimetric examinations and safety tests on Lithium-ion cells and post-Lithium cells. For this purpose, depending on the cell size and application, different types of calorimeters are used in Europe’s largest Battery Calorimeter Laboratory, which was established in 2011. It provides six Accelerating Rate Calorimeters (ARCs) from Thermal Hazard Technology allowing the evaluation of thermodynamic, thermal and safety data for Lithium-ion and post-Li cells on material, cell and pack level for both normal and abuse conditions (thermal, electrical, mechanical).

The lab also includes glove boxes for the cell assembly and disassembly, many temperature chambers, a thermal camera and cyclers with several hundred channels. Also, it contains extremely sensitive 3D Calvet calorimeters, which provide thermodynamic parameters and gas chromatography-mass spectroscopy systems from Perkin-Elmer for venting gas analysis. The group’s work can be categorised into the following six areas (s. Fig. 1): 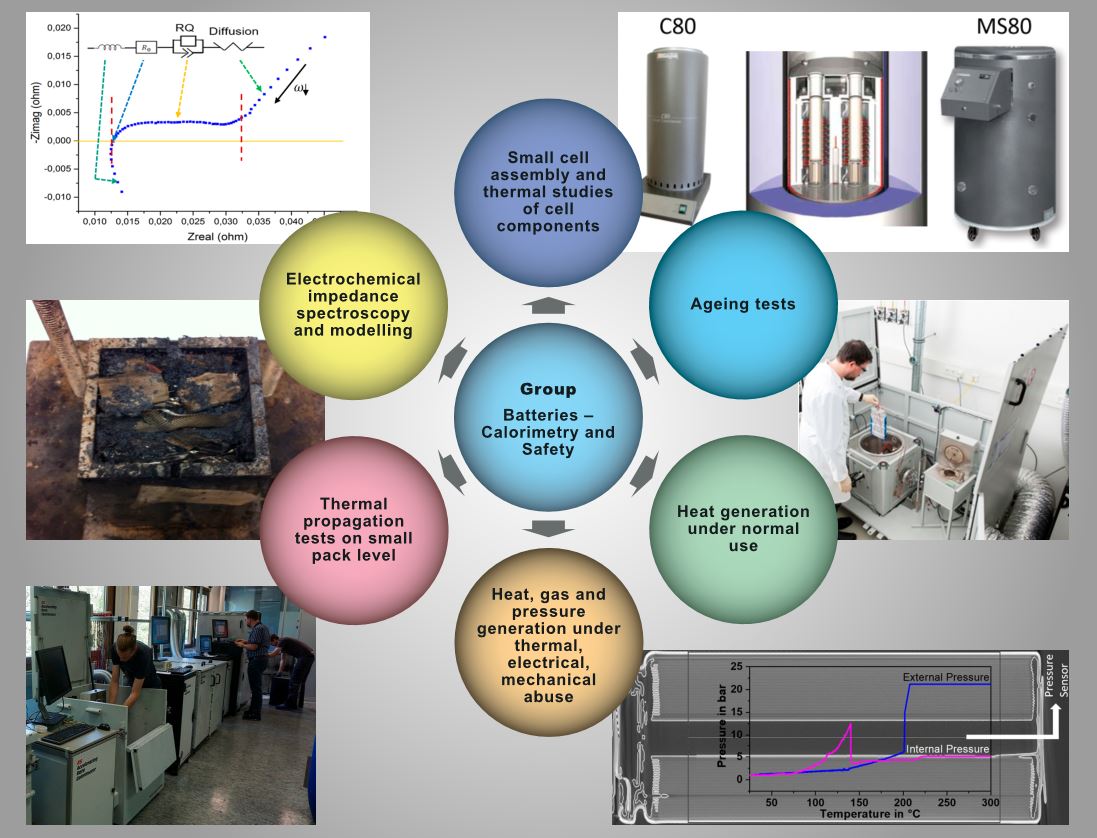 With a press located in a glove box, coin cells are assembled. These are mostly half cells with a metal (Li, Na) as one electrode and new material, for example, a post-Li material such as Na0.53MnO2 as the other electrode. On the materials and components level, a Setaram C80 3D-Calvet calorimeter provides thermodynamic parameters. After the formation process, the cells are electrochemically characterised.

Comprehensive ageing tests are carried out at the cell level for all cell sizes. At first, fresh cells are stored in temperature chambers at different temperatures and states of charge and then characterised at fixed time intervals in to study the influence of this storage (calendar ageing) on ​​cell performance. At second, cells of the same type are aged at different charge/discharge rates or with different load profiles (full cycles, partial cycles, driving cycles and stationary storage cycles (cyclic ageing).

3) Heat generation under normal use

In the Setaram MS80 3D-Calvet calorimeter, fresh and aged coin and cylindrical cells fit in and their heat generation during cycling can be determined very precisely by direct heat flow measurement using the 3D Calvet sensor arrangement, where the sample vessel is surrounded by rings with hundreds of thermocouples. For heat generation studies on larger pouch cells or prismatic automotive cells, isoperibolic (constant temperature of the calorimeter) or quasi-adiabatic (no heat exchange with the calorimeter) ambient conditions can be adjusted in the ARCs. Then the measured temperature data can be converted into generated and dissipated heat data by determination of heat capacity and heat transfer coefficient using heat flux sensors.

The abuse or safety testing has the main objective to identify all possible risk conditions to clearly define mitigation measures to be used in design, control and usage of the cells and packs. It is carried out using six ARCs of different sizes – from cylindrical to a large pouch or prismatic automotive format – by applying electrical, mechanical and thermal abuse scenarios and studying the heat, gas and pressure generation under these conditions. This allows quantifying critical parameters and their thresholds for safe cell operation. Moreover, the influence of ageing on the hazard potential can be quantitatively determined.

If it is not possible to stop a single cell from going into thermal runaway, the propagation of the thermal runaway to the neighbouring cells, the so-called thermal propagation has to be prevented or at least extended by five to 10 minutes. The largest ARCs allow studying the thermal propagation on a small pack level to develop and qualify suitable heat protection barriers, which give the passengers in an electric vehicle enough time to escape or to be rescued by the firefighters. This is currently a very hot topic because new regulations will come into force soon.

Using devices from Gamry and Biologic electrochemical impedance spectroscopy (EIS) is performed on fresh and aged cells and the recorded impedance spectra are modelled using electrical equivalent circuit models (EECMs). This allows a deeper insight into the interface and charge transfer processes and to determine the irreversible heat. Moreover, thermal and ageing models can be developed.

These data are used by our research and industry partners for the design and adaptation of thermal management and safety systems. In addition, the developed calorimetric methods could be transferred to industry as an important contribution to the quality assurance of LIB.