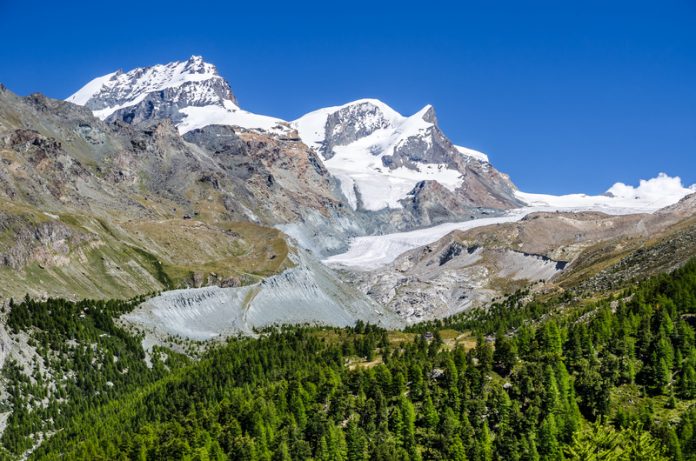 Martin Hoelzle and Kathrin Naegeli, Department of Geosciences, University of Fribourg share how glaciers are altering in fast-changing landscapes

Glaciers are always thought of as clean and white surfaces representing an intact and untouched nature, not influenced by humankind. This somehow romantic and idealistic view of earlier decades of glaciers is starting to be more and more replaced by a view showing us fast-changing landscapes represented by dark-grey rock and debris dominated mountain ranges. Sometimes this change is so dramatic that many mountaineers, who are familiar with a certain glacier landscape, are stunned if they return in intervals of a few years to the same location and notice the strong changes. Several studies document that the coverage with debris, as well as a general darkening of the glacier ice surfaces take place today. From a scientific point of view, glacier surfaces do not only contain snow and ice but are heterogeneous mixtures of different kinds of surface materials.

These materials vary greatly in their distribution and particularly in their thickness. Thick debris coverage consisting of small stones and large boulders released by steep rock walls surrounding the glaciers can occur both in the accumulation and ablation zones. Rocks falling in the accumulation zones of glaciers are generally covered by snow and transported downwards by the glacier flow. In the ablation area, the debris is emerging to the surface due to the upwards directed flow of a glacier. In the ablation zone, falling rocks accumulated directly on the bare-ice. Thus, debris originating from rock walls surrounding either the accumulation or ablation zone can reach several meters of thickness. Melt beneath such thick debris layers is decreasing exponentially with increasing debris thickness, as a result of the insulation of the underlying glacier ice from the atmosphere above. Hence, the existence of debris on the glacier surface also alters the energy balance, by allowing surface temperatures to rise above the melting point compared to a bare-ice surface, and by changing heat and moisture exchanges with the atmosphere.

Debris thickness and its impact

However, ice melt is strongly enhanced when the debris thickness is less than a few centimetres because of an increased absorption of shortwave radiation and therefore, a rapid transfer of energy from the atmosphere to the underlying ice. The ratio between outgoing and incoming shortwave radiation is called albedo, which in turn is a direct measure of the ability of a surface to absorb or reflect radiation. In recent years, many studies concentrated on the influence of thick debris on melt rates of the underlying ice. Only a few studies looked into the complex processes of fine, dispersed materials present on glacier surfaces and its influence on ice melt. However, these processes occur to be very important as they represent one of the strongest feedback mechanisms associated to the current warming of the atmosphere and its consequences of glacier mass loss, the ice-albedo feedback. If one would like to estimate future melt rates based on climate model outputs, it is therefore essential to have a better process understanding of the influence of these fine materials covering large parts of glacier ice in the ablation areas.

The absorption of solar energy at the glacier surface is governed by the presence of different snow and ice characteristics. These are dependent on the crystal size and shape, the presence of light-absorbing impurities like mineral dust, soot, organic materials, and site-specific properties such as ice surface roughness or the availability of a water film. Remote sensing techniques, based on both airborne and satellite sensors, allow us to obtain information about the ability of the ice surfaces of mountain glaciers to absorb solar radiation. Typical albedo values in the ablation areas of some investigated glaciers in the western and southern Swiss Alps are around 20%, meaning that the glacier surfaces at these places are absorbing 80% of the incoming solar radiation. In the frame of the project called Swiss Earth Observatory Network (SEON), we used 3 different sensors to derive and compare the applicability of varying albedo retrieval approaches. A hyperspectral sensor, called Airborne Prism EXperiment (APEX), having more than 280 spectral bands in the wavelength range of 400-2500 nm and a ground resolution of around 2 m was compared to 2 satellite sensors, Sentinel-2 with 11 spectral bands and a ground resolution of 20 m and Landsat 8 with 7 spectral bands and a ground resolution of 30 m. We could identify that all sensors deliver robust results, showing the great potential of satellite data to monitor glacier surface albedo. However, the comparison was limited in the sense that only a snap-shot of one particular point in time of the glacier surface was monitored. To include the temporal component, we therefore investigated how ice albedo varies over different time-scales such as seasonal changes, which are mainly determined by the variable presence of the snow cover. For longer time periods such as decades, we looked into the considerable inter-annual variability that is however strongly influenced by the uncertainty of the overflight time of the airplane or satellite. For the 2 decades 1999 to 2016, a continuous darkening of glacier ice could be detected in restricted areas such as the glacier tongues or along lateral margins. However, no significant negative trend was found if the entire ablation area was averaged for individual glaciers. This finding emphasises the importance of a clear distinction of the spatial scale (regional, glacier-wide, bare-ice, point) when analysing and comparing albedo trends.

Moreover, we investigated how the albedo of ice influences glacier melt rates. Based on spatially distributed ice albedo derived from Landsat 8 and a wealth of measured point mass balance data from 12 Swiss glaciers, a mass balance sensitivity of -0.14 m water equivalent (w.e.) per year and 10% albedo decrease was revealed. Moreover, larger glaciers exhibited a stronger sensitivity compared to small glaciers, due to their low elevation areas that are affected by the ice-albedo feedback for a longer time period. However, independent of the size and elevation range of an individual glacier, local climatic conditions, in particular the amount and timing of snowfall events, strongly impacts on the mass balance sensitivity to changes in ice albedo. Using a mass balance model, we were able to quantify that spatially explicit ice albedo enhances local ablation rates by up to 50%, depending mainly on the abundance of light-absorbing impurities in some areas of a glacier. 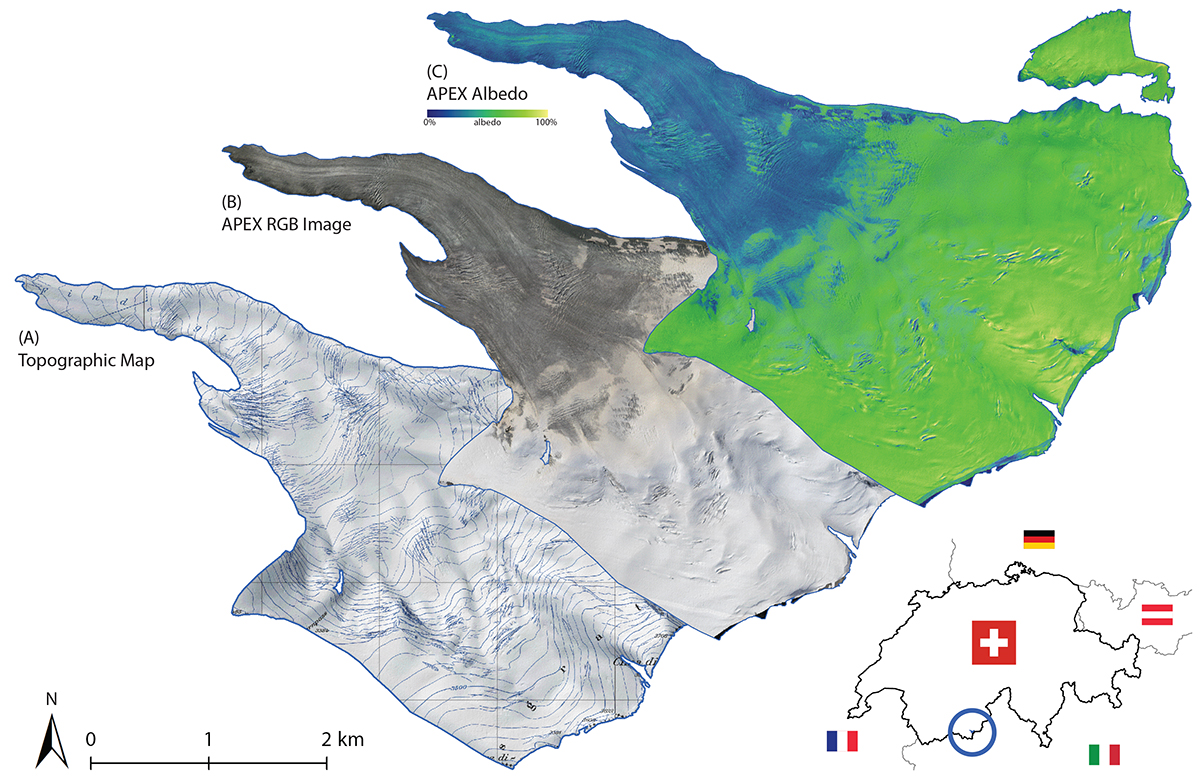