Dr Gideon Bolt, Assistant Professor at the Faculty of Geosciences – Utrecht University highlights research into the importance of diversity in cities

Since Louis Wirth’s classical essay Urbanism as a way of life, a central tenet in urban studies is that there is a negative link between heterogeneity and social cohesion. As our present-day, cities are even more diverse than in the era of Wirth, there seems to be not much room left for optimism about the social fabric of the city. Hyper-diversification might lead to more social exclusion as individuals increasingly segregate themselves from others belonging to a different class, ethnicity or lifestyle (Fincher et al., 2014). This complicates the creation of feelings of belonging and community, as people are generally inclined to connect to similar others which might make urban groups prefer to live side-by-side without socially integrating with each other. Putnam (2007), who primarily focused on ethnic diversity, reported negative effects on social outcomes, like trust, social networks and political efficacy. However, his findings have been refuted on methodological grounds (Abascal & Baldassarri, 2015).

Moreover, qualitative studies show that living amidst diversity does not necessarily lead to social withdrawal and that residents in diverse neighbourhoods are often open, or at least civil, towards other cultures (Wessendorf, 2014). Noble (2009), for example, describes the ways in which difference is perceived in unproblematic ways on a daily basis as ‘unpanicked multiculturalism’, contrasting it with the ‘panicked multiculturalism’ that is common in today’s debates on multiculturalism and mainly focuses on conflicts and tensions between different ethnic groups. 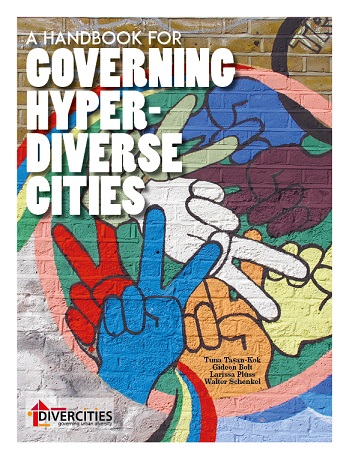 The benefits of diversity

Noble’s observation is corroborated by the DIVERCITIES research project which aimed at examining the ways in which Europe can benefit from diversity. The research for this project was undertaken in 11 EU cities: Antwerp, Athens, Budapest, Copenhagen, Leipzig, London, Milan, Paris, Rotterdam, Tallinn, Warsaw; and 3 non-EU cities: Istanbul, Toronto, and Zurich. Most residents of our diverse research areas take diversity more or less for granted. This is more apparent in places with a long history of diversity (like Toronto and London) than in places with a short history of immigration (like Leipzig and Athens). We have also seen clear differences between young people and adults. Young people spend much more time in public spaces such as streets and plazas. There they meet and make friends with neighbourhood children from diverse social backgrounds. More often than adults, young people develop friendships across different boundaries and are less likely than adults to perceive ethnicity as the main social divider in the area. Instead, young people distinguish groups based on their school, sub-neighbourhood, or subculture. Even more than adults, they tend to see diversity as an ordinary part of their everyday lived experience. If this reflects a generational effect (and not just an age effect), their general acceptance of diversity is a hopeful sign. If a new generation is more at ease with diversity and has more open and dynamic networks, social divisions may be broken down. Political discourses should adapt to this trend by reconsidering the use of old terms such as multiculturalism and assimilation. The ‘ordinariness’ of diversity could be highlighted in the public realm as a positive element of urban life (Maloutas & Souliotis, 2015).

One of the points of departure of the DIVERCITIES project is that diversity does not necessarily have a positive or a negative effect on social cohesion. Policies should focus on creating the conditions which stimulate encounters that lead to bridges across (ethnic, religious, class and other) boundaries. The ways in which people do or do not interact in different places are related to 4 conditions which facilitate encounters: multifunctionality, connectedness, comfort, and sociability. By integrating different activities, places can successfully stimulate the intermingling of diverse audiences by allowing them to participate in shared activities which stimulate interaction and collaboration. Obviously, such places must be embedded in and connected to the local infrastructure. In addition, the spaces must have a good image, be clean, and feel safe; these conditions will ensure that diverse groups would like to spend time there and feel relaxed enough to interact with others. Lastly, successful spaces of encounter encourage planned as well as spontaneous meetings by integrating the routes and routines of different groups.

Although we have come across many positive experiences of diversity in our research, we have also found people who have had negative experiences with local diversity. These may take various forms: crime associated with disadvantaged youth; residents who do not speak the language of the host society in public and semi-public spaces; and a lack of amenities for specific groups. Negative experiences with diversity in the local area should not be addressed by attempts to reduce diversity there. Our research areas have an important function on the local housing market: the availability of affordable housing is one of the main motivations for low-income households and recent immigrants to settle in such neighbourhoods. Diminishing the number of affordable housing alternatives will diminish the housing possibilities for low-income households. Complaints about the neighbourhood are often not directly related to diversity but rather to liveability issues which are sometimes associated with the population composition of the area. Making the public realm cleaner, safer, and more attractive helps to deal with many of the issues that are raised by residents.

1 This project has received funding from the European Union’s Seventh Framework Programme for research, technological development and demonstration under grant agreement No. 319970. SSH.2012.2.2.2-1;Governance of cohesion and diversity in urban contexts